Why was the character Coldhands not introduced in Season 4, when he was in the books?

In the book A Dance with Dragons; Coldhands is the one who leads Bran and the rest to the Three Eyed Raven, but in the TV series Game of Thrones this character is never introduced. Why is that?

There were lots of theories floating about that character and the TV Series just killed them all off. The TV writers seem to always be in sync with the author of the books, George R.R. Martin, and they do know (at least a little bit) about each character in depth (more than books), and

Cold hands was speculated to be Benjen Stark.

If the TV writers felt that it was not important to introduce it, does that mean that all these theories were wrong?

There can be many reasons a character isn't introduced. While I can't seem to find any interviews that directly explain why this character was left out, that could be because they don't want to spoil anything for the remaining seasons.

While I haven't read the books, I watch the show with a few people who have, so I'm aware of several moments in season 4 that did not go according to the book.

The thing I tell them is the same thing I tell everyone who's read the book a film is adapted from: the show writers are telling their story, the book writer is telling a different one. Sometimes they're 100% accurate, sometimes only 50%, and sometimes they go a completely different direction. The reason for changes can be numerous.

Unfortunately, without any official word from the show's writers, anything discussed is pretty much conjecture. I'm simply seeking to provide reasons for why certain things may not be included in film and television adaptations of written works.

Since you are addressing Cold Hands specifically, and his absence, I'll float this (which is built from a comment I made on another, slightly overlapping question), which I think needs to be considered in its own right.

The reason Cold Hands isn't in the TV show is because...

Before all his über-supporters jump on me, let me explain myself:

GRRM has been involved with the Game of Thrones TV show from its inception, and has obviously been advising the script department on the significance of certain elements, so they can draw particular attention to them. Much like one on the comments made about Harry Potter from @MattD above, this is to help with character motivation and overall focus.

If he was an important character to the Grand Narrative of Game of Thrones, wouldn't GRRM have insisted on his presence?

Think about it: he has had every opportunity to declare to the Showrunners that Cold Hands is the future king of Westeros, or has some significant part to play that couldn't be substituted by another character. If he was integral to its story, he would be included.

That isn't in any way to diminish his presence in the books, its just to say that he isn't required for the TV show. It functions perfectly without him. The only people who are concerned about his absence are people who perceive the show para-textually alongside the books: try it, ask anyone who hasn't read the books if they think its confusing or lacking without Cold Hands, and watch as they stare back at you with confusion.

Some fat has to be trimmed, and GRRM was obviously happy with them losing Cold Hands: he was in collusion with the show, and as such an accessory to his removal. He can't think much of the character, or at least doesn't consider him to be important...

There are several theories among book readers as to who Coldhands may actually be.

If this theory is true then it wouldn't be much of a point showing him in the series as Bran is already being led by this being and helped by the Reeds to the 3-eyed crow's lair.

If the theory that he is a member of the Night's Watch is indeed true I can then also see why this would be not necessary considering of what they showed of Bran's journey seemed to be just a struggle through the North to the great Weirwood tree.

However, one theory also states that Coldhands is actually The Night's King. 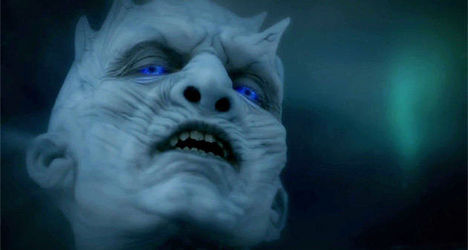 Which is who this guy is rumored to be.

As far as why, no one is really at liberty to say except the show-runners themselves, unfortunately. And from what I can find there hasn't been much of a word on Coldhands appearing or not appearing.

All we have is our theories.

Pure conjecture on my part, haven't read the books, but extrapolating from some other answers, Could it be possible that

If you have this character, Coldhands, who isn't really important other than the fact that he resolves what happened to Uncle Benjen, and the actor who portayed Benjen is not available (for whatever reason) it makes sense to cut the character entirely rather than recast. But I'm literally just making this up as a plausible scenario and have absolutely no evidence. IMO most likely Coldhands either isnt important enough, or as was mentioned, he will make an appearance later on, when his presence is more crucial.

Spoiler Alert So Coldhands is rumored to be Benjen, as he dresses in night's watch garb and doesn't reveal his face. Having watched the finale, perhaps Jon will become Coldhands instead? Maybe Bran, being with/becoming the 3 Eyed Raven, he'll have the power to transform Jon in some way? The three eyed raven seems to have some control over wights as they can't enter his cave ("the magic that reanimates them has no power there" http://gameofthrones.wikia.com/wiki/Three-eyed_raven). They may bury Jon in the Godswood near a weirwood and Bran could transform him that way? Just a theory.

Not the answer you're looking for? Browse other questions tagged game-of-thrones book-adaptation .

6
What is the purpose of the changes to Game of Thrones show?
9
Why are they avoiding showing Arys Oakheart's face?

23
Why are movies so different from the original books?
3
Why was the family's viewpoint not shown in the movie?
13
What will happen when the TV series catches up with the books?
10
What has changed in Season 5 of Game of Thrones compared to the books?
5
Was "The Black Echo"'s diegetic existence merely a nod to the books or an element from the books?
5
How is one "Deemed Worthy", to acquire the Greatsword "Dawn"?
3
Why isn't Ned Stark's mother ever mentioned or shown?
8
Have all of the 3 Game of Thrones twists been revealed?