What happened to the natives?

In Aguirre: The Wrath of God, two natives approach the raft, and are taken aboard. After the priest on the raft attempts to convert them by showing them the bible and saying that it is the word of God, one of the natives tries to listen to it, and complains he can't hear anything. This makes the people on the raft upset, and they gather around, yelling at the natives, who crouch down, presumably in fright.

Then, in the next scene, they are gone for good. Were we supposed to infer that they were killed? The movie didn't shy away from showing other deaths. But it's not obvious that they could have gone anywhere.

Did I miss something?

Your scene can be seen on Youtube in Spanish with subtitles. Here is a screenshot with dialogue in English: 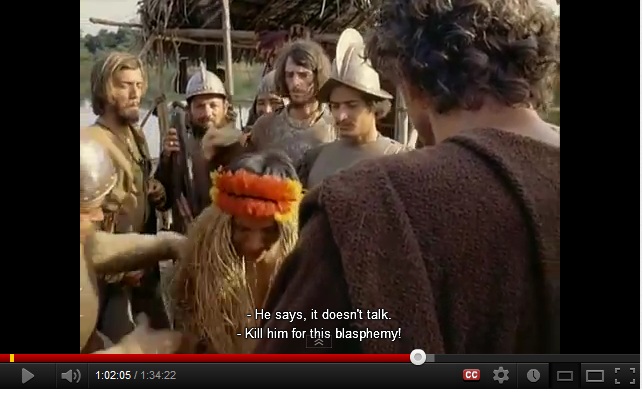 I think this indicates they were indeed killed. It is possible that, as this is near the end of the film, Herzog was running up against the end of his budget ($370,000, a third of which went to Kinski), and so the lack of a scene showing the death might have been a lack of cash. In the book Herzog on Herzog, he says:

Sometimes I had to sell my boots or my wristwatch just to get breakfast. It was a barefoot film, so to speak, a child of poverty. (p. 84)

You can read the section on Aguirre: Wrath of God in the Herzog book at Google Books starting on page 76. The film is only very loosely based on the the biography of Aguirre (which is sparse at any rate). The script is almost a complete fabrication. The ending, where Aguirre goes mad surrounded by monkeys in the Amazon, is not factual - Aguirre made it out of the jungle and was later killed in Venezuela. Herzog's telling of his decision-making processes with this film are fascinating reading!

Not the answer you're looking for? Browse other questions tagged plot-explanation aguirre-wrath-of-god .