In the title sequence, what is the strange futuristic noise/blinking effect?

During the title sequence of Game of Thrones, just after the camera pans up the frozen wall, there is a 'blinking' effect and a strange futuristic sound. Is this supposed to represent something important?

Its the sound made by the viewing lens changing. If you watch the intro carefully, you'll see that the "zoom" changes in conjunction with the sound. Apart from being a cool effect, I doubt it has any deeper meaning.

After the Season 6 Finale we also see that the orbs and rings we see in the opening are most likely an astrolabe (aka armillary sphere, armilla, or armil).

We see the same object hanging in the Citadel at Oldtown. This can be determined by seeing the same markings on the rings.

The meaning of this is still not fully known, but there is an interesting fan theory...

"The overarching saga is called A Song Of Ice And Fire after all, and in the world of Game of Thrones songs are used to pass on heroic stories and legends. So does that mean somebody is telling this story of Dany, Jon, Arya, Cersei, and the rest to future generations?"

"If that’s how it ends, some fans might be mad about the set up of the story. But if this theory is right, does it make sense for Sam to be the one that devotes his life to passing along the heroism and cruelty of everyone in Westeros? Or could it be Sam’s son who was told the story by his father and then passes it on to his own children? If this theory is accurate, there are any number of options that would make sense. But for now it is just another theory."

As for the "blinking effect" the fan theory is that this is literally a person blinking because that person is using the optical device we see the Maester at Oldtown using. 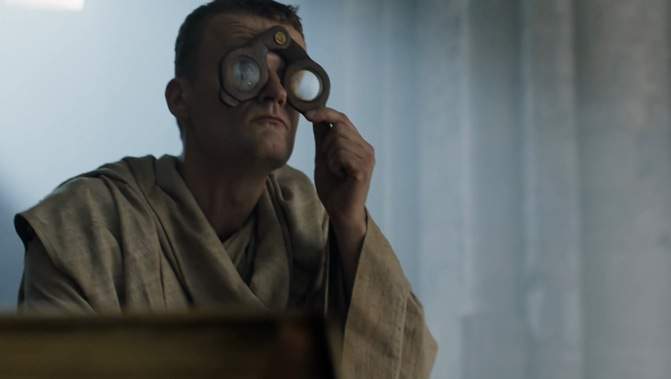 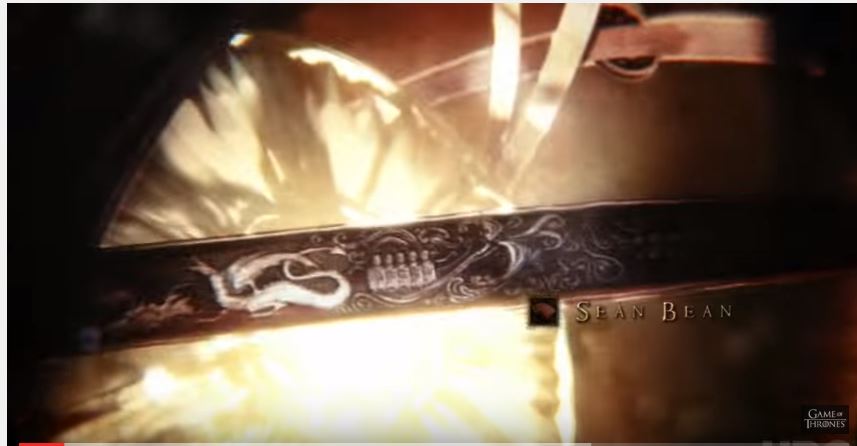 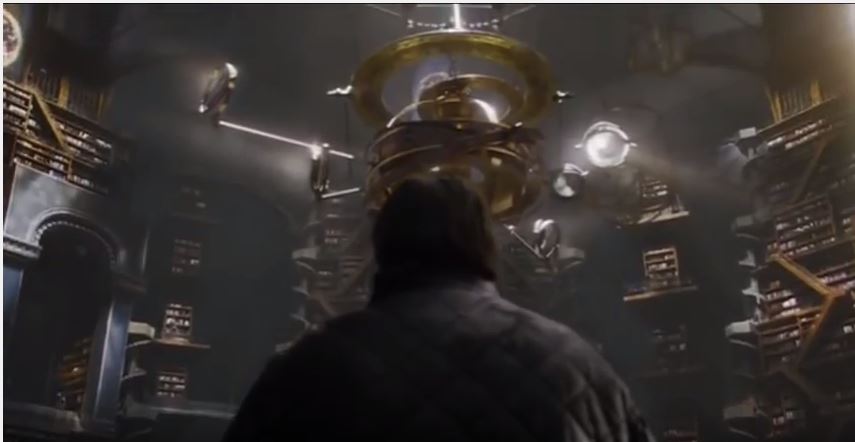 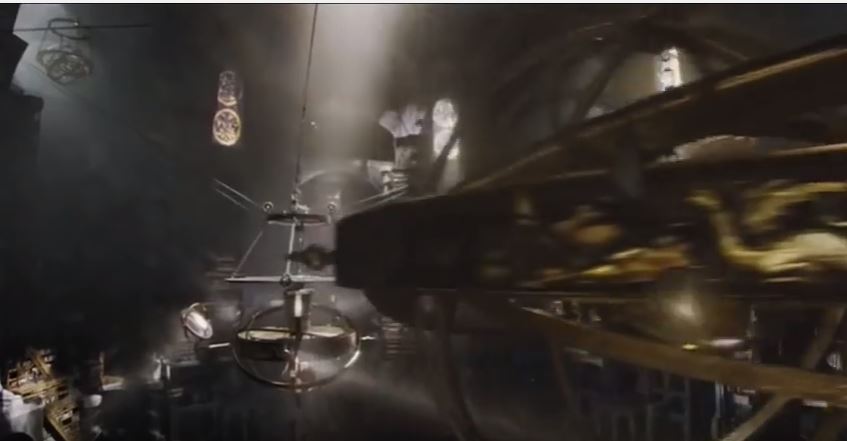 I think it goes with the mechanical theme for the intro - when they change zoom level they accompany it with a 'snick' sound and show the edge of the new lens crossing the screen. To zoom in more there are multiple lenses to slide in, so multiple 'snicks'.

This is similar to how you change magnification level with a microscope. It's very hard to smoothly change zoom at small scales, and I think they want to reinforce the effect of the intro being a mechanical map that's just about possible using the technology available in the series.

In fact, from what I have seen, that blinking effect comes from the globe that shows up between the map shots at the scene. It keeps spinning during the whole opening, and its rings move making that blinking sound. In the internet, they call it the Astrolabe (had to link because the image is too big):

It seems to not have importance at all, but if you look closely and pause at certain parts, its design shows the animals of the families they represent (such as the dragon of Targaryen, the lion of Lannister, the stag of Baratheon and the wolf of Stark).

The picture below is a close-up of the astrolabe and it seems to hint at Robert's Rebellion: 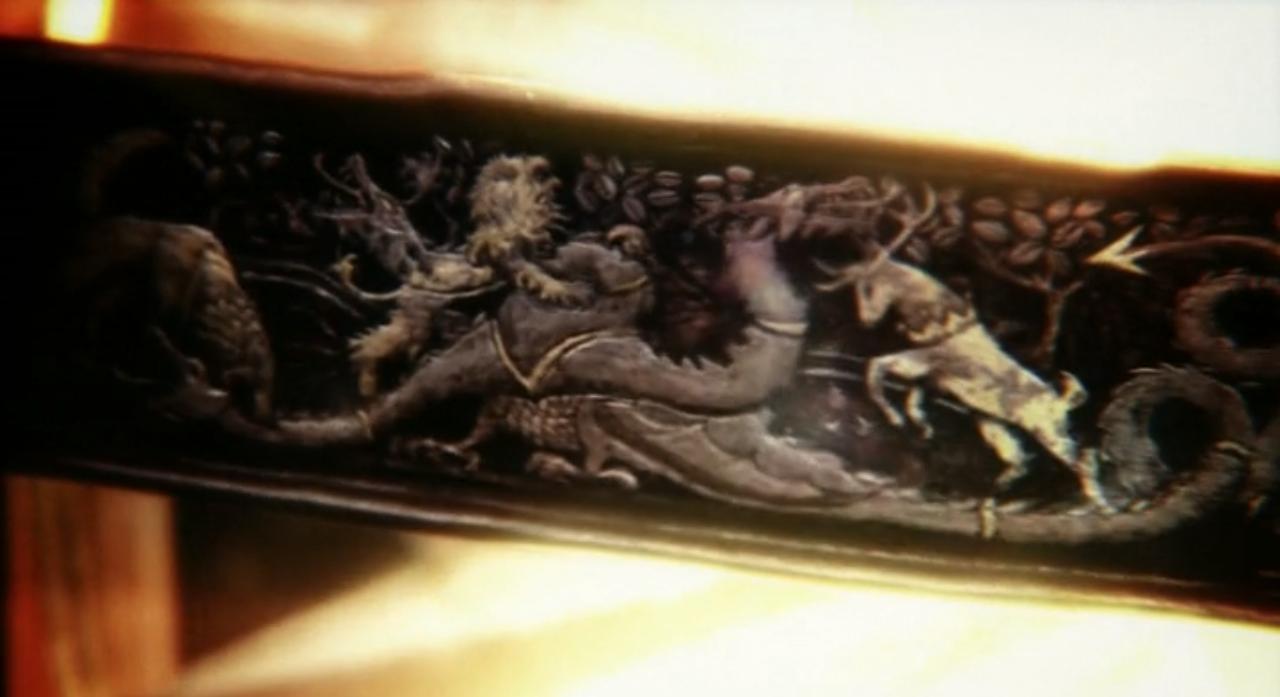 As of the dragon (Aerys Targaryen) is being attacked from both sides by the wolf (Eddard Stark) and the stag (Robert Baratheon), and surprisingly being also held up from behind by the lion (Jaime Lannister, who betrays and kills him).

If you look on the internet, more shots like this can be seen throughout the opening, with a few more hints of the show's backstory. Everything seems to have a meaning on this, it is pretty amazing.

I just got here, because I have to write an essay about this opening sequence. Here's what I wrote (hope it will be useful):

The opening sequence was designed by Santa Monica-based Elastic design studio director Angus Wall, working along with The Rock Paper Scissors group. Wall is an acclaimed film editor and title designer that rose to prominence during the 90's when he worked for David Fincher as his lead editorial consultant.

The main function of the title sequence was to help the audience orient themselves within complex plots that affect and intertwine each other in the giant fictional world of Westeros and Essos. Elastic team was to introduce the world's maps and geography to the viewer, but also to avoid standard tropes for fantasy maps - aged parchment with Medieval-like inscriptions presented in the candle light; and although Tolkien maps of Middle-Earth was their starting point inspiration, they had to move away from this kind of depiction.

The breakthrough happened when the design process moved from Middle Ages to more enlightened ones. Decorated initials and vignettes were exchanged for Da Vinci's sketches and models. The digitally created clockwork universe was born. To stay away from both – the archaic belief of flat earth and the illuminated spherical earth models – Angus Wall and his team created an inverted world that surfaces on the inside of a sphere. To marry helio- and geocentric models of the universe, the sun is placed in the centre of the world, within a celestial armillary sphere.

What's surprising, the sun itself became a flat object – a disc constrained within the innermost ring of the astrolabe, rotating within the machine. Rings of the astrolabe are engraved with scenes from Westeros history that occurred prior to the action in the books and the TV series – three of those are shown – the Targaryen invasion of Westeros (burning city, dragon and an army), Robert's Rebellion (a wolf, a lion and a stag killing a three-headed dragon) and Robert's ride to power (a stag with a halo with other animals paying homage to it). "We cut to those three times in the title sequence, so you actually see a history of Westeros and Essos. The third time we see all the animals [representing] the different houses bowing down to the Baratheon stag, which brings us to the present, where there's a Baratheon king. We wanted to be very, very faithful to the book because we knew there would be a large fan base that will be looking at this very carefully," says Angus Wall.

In the digitally-created environment, the camera (or rather illusion of it) swoops down from the sun towards the surface of the map (speeded up with few lens snicks – another invention for the mechanism-themed opening). At the surface, a single cogwheel with a crest starts to turn and the whole clockwork model of a city emerges from the ground. The camera travels from place to place, showing more cities and castles, each being erected in the like manner. This part represents the ruling houses with their machinations being the propelling force of “Game of Thrones” world. Also, it informs the viewer where the action of the episode will take place. This creates an unprecedented result, as the opening scores animation evolves from episode to episode as multiple plots develop. In the first season alone there is four varying openings, or “map paths”. The rest of the map is a topographic representation in 3D, having distinct angular shapes (contour intervals are presented literally) and small amount of features, generalised only to main roads (lines), forests (green spiked pyramids) and rocks (grey polygons). Names of notable places are integral part of the map, the style of the font resembles quill and ink writing, similar one to the one used in Tolkien maps for “Lord of the Rings”.

Not the answer you're looking for? Browse other questions tagged game-of-thrones sound-effects title-sequence .

5
Where and why is the Royal Coat of Arms in the title sequence of 30Rock
8
Did Myranda try to kill Ramsay?
10
Who did we hear in Bran's vision in S06E06?
6
In which Game of Thrones episode(s) the opening sequence shows the greatest number of locations?
16
Why does this happen with Longclaw?
18
Why didn't they use the bear attack casualty in Game Of Thrones S07E06?
8
What is the reason for using this sound effect for Gus Fring (season 4 episode 2)?
0
Did the spear of the Night King reach its target?
1
Whats up with "The Bells", GoT S08E05