Does the extreme violence and sex in Game of Thrones affect its ratings?

In my time of TV watching, Game of Thrones is the most sexually explicit and violent show I have ever watched.

Is there any evidence that this extreme violence and sex impacts upon its ratings either positively or negatively?

Anecdotally I have several friends who refuse to watch the show due to its explicit nature and my wife has said that after the events of the most recent episode she is considering not watching it any more. However, this is anecdotal. Is there any verifiable evidence that the violence/sex has an effect on the show's ratings one way or the other?

Let's look at the ratings! All the numbers in my post are based on the zap2it reports of Nielsen ratings. First, a pretty graph to give you the jist of it (click to enlarge):

As you can see, generally the ratings are rising, however there are several dips:

These two are important as they're the start of a trend, these are both the Sunday before the Last Monday of May, which is Memorial Day in the USA. Because of these two drops, there was no episode on Memorial Day weekend in 2013 or 2014, so we'll discount them for now. The second set we'll be discounting are the second episodes after a season premiere, as pilots and premiers always draw in new viewers due to the increased advertising they receive and more people trying the show to see if they like it.

However, after the following episode in which Eddard Stark is killed, there was no subsequent drop in viewers, and he was certainly (one of) the most liked characters.

Before we get to the season 2 drops, I'd like to show you the IMDb user ratings for the show, courtesy of kevinformatics: 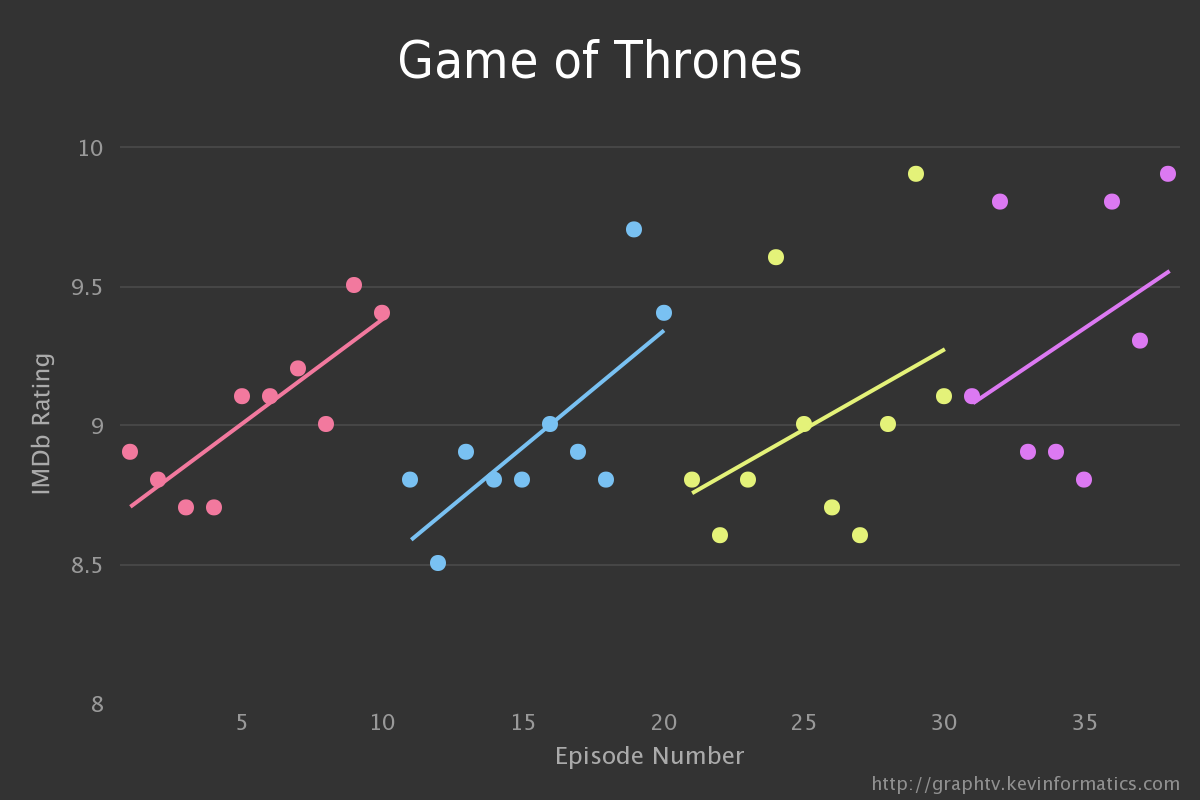 As you can see, the early episodes from every season are poorly received compared to later episodes, and this is the best reason I can find to explain the drops early on in season 2:

As you can see, this is the biggest group of losses in the show, a lot of major characters are killed and I'd be willing to believe its because of the violence, but I suspect most people will have realised the tone after Eddard's death. It may be that they did, but were hoping it would change. Regardless, season 3 is much more consistent (other than Blackwater):

Really this is all just speculation, but I don't believe there's any real relationship between sex and violence and viewerships, though I'm certain there are definitely thousands of people who have stopped watching because of it, the overall shift hides it too completely. You also shouldn't forget that this is the internet, and the same thing is likely to attract others for the same reasons, internationally and illegally it's doing amazingly well too.

The last episode was very violent compared to most, so if we see a huge dip that may provide an answer, though even after episodes like The Rains of Castamere when the Starks were finally defeated in a very brutal manner, the increase in viewership was substantial.

Not the answer you're looking for? Browse other questions tagged game-of-thrones audience-measurement .

25
Am I only missing nudity and violence?
-11
Why do some TV scenes include many sex scenes when it obviously leads to worse ratings?