Why did the Indians decide to end it this way?

I've a couple questions stemming from Valhalla Rising. At the end, One-Eye

turns to face the Indians, dropping his axe and allowing them to beat him to death.

(The scene reminds me that Indians played Golf long before the Scots "invented" it.)

Once they have killed One-Eye, after which, if you believe the more mystical ramblings, One-Eye can return to Valhalla as Odin, victorious after his small victory over the upstart Christians, the Indians look at The Boy while he returns their look. 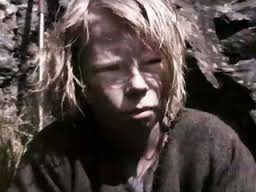 Then, they turn inland as one, leaving The Boy alone on the shore.

Why do the Indians kill One-Eye but leave The Boy?

If I recall, the one-eyed man offers himself without a fight to the Indians in exchange for the boy's safety.

It's hard to tell because there was little to no dialog in the movie to begin with and One-Eye is mute, you have to try and interpret the actions, facial expressions and every other aspect beyond speech.

The movie is split up into 6 parts, the last being "The Sacrifice" which gives some substance to how I interpreted the final scene.

From this Wikipedia page

One-Eye and The Boy successfully reach the coastline and are soon met by over a dozen clay-covered warriors. One-Eye regards them knowingly, as he has already foreseen this event in a vision. He puts his hand on The Boy's arm, then walks into the middle of the tribesmen. He drops his axe and his knife and closes his eye. One of the warriors fells him with one blow to the back of the head, before the other warriors finish him off.

One-Eye's spirit walks into the estuary next to his cairn and disappears below the surface. On the beach, the remaining tribe members quietly withdraw back into the forest, leaving the boy looking out at the ocean. The sky grows dark.

He saw his fate when he and the crew were drinking the psychedelic brew. There seems to be a much deeper and richer story than what meets the eye, like a Donnie Darko kind of situation.

The movie director Refn admitted it's pretty much like 2001: A Space Odyssey. To me that means it's an existential movie about humanity. A Space Odyssey was about evolution, technology, birth, cycle of life and artificial intelligence.

Valhalla Rising is about religion, primal instinct, innocence and discovery.

There are 2 major religion trends depicted in the movie: Christianity, Paganism. It is important to note the main character is a human version of Odin.

On the contrary, Paganism is described as a way of self-control over primal instinct for no other reason but to survive: live with almost no food to survive, fight viciously to survive, wait for very long periods until an opportunity shows up like the arrowhead...

One thing to note is the fact that Christians are ready to kill a child while the pagan and the primal tribe would not. IMHO that is meant to show that you can easily lose your innocence with Christianity while Paganism and primal instinct have much more respect for innocence. Actually the spiritual cycle of life goes from innocence, primal instinct, self-control (paganism) and control (Christianity) and we could say we actually lose all innocence the day we start to control others.

Another important thing to note is how the Christians come back to their primal instinct once they drink in North-America. And I think that this is what the movie is all about. Bottom line, everything in an adult is about primal instinct. The innocent child is there to witness the primal instinct taking place.

And there's the native tribe that represents the pure primal instinct. Slowly fighting the Christians they are simply hiding most of the time, spying and waiting.

The only thing that would make sense for humanity survival is to sacrifice oneself, the supreme proof of self-control, like Jesus did. But this time it's the human version of Odin that does the sacrifice, the One-Eye Pagan ready to die for the only thing that make sense now that he has survived this long. A sacrifice with the hope that the next generation will do better now that it has witnessed all the bad things a human is able to do.

I believe the Pagan knows it is a 50/50 situation in which the child may or may not die once the native tribe kills him. He tries to put the odds on the child survival by showing to the primal instinct the right way. The Pagan shows the native tribe he is ready to die, he makes the child confident he won't die by taking his arm, then he goes in the middle of the natives and wait there without talking to them just looking at them, silently saying "Just kill me guys so you can satisfy your primal instinct." Actually I would do the same in front of a bear with no other choice "Just eat me and leave my child alone." Actually this requires a lot of self-control.

Conclusion: Forget religion and whatever abstract concepts your mind can come-up with, everything in a human being always come back to primal instinct. The best you can do is to control yourself before trying to control others. If you're able to survive life and finally give life to another innocent child you actually made it: survive and reproduce is the ultimate goal of any living being. You can only hope the next generation will do better with whatever lessons they have learnt while they were innocent. It doesn't matter the next generation goal in life is viable or not, as long as they have one goal in life is enough for them to fight to survive. And it doesn't what new discoveries you make because the cycle of life will always remain the same, here or anywhere else, human don't change even on a new virgin continent.

I guess I drank some of their psychedelic brew.

Not the answer you're looking for? Browse other questions tagged plot-explanation valhalla-rising .