What language is shown on the TV in Bruce's cell?

When Bruce Wayne is in the prison-pit-thing in The Dark Knight Rises, what is probably the president of the US appears on TV. Underneath, there are some subtitles, in some language. Screenshot: 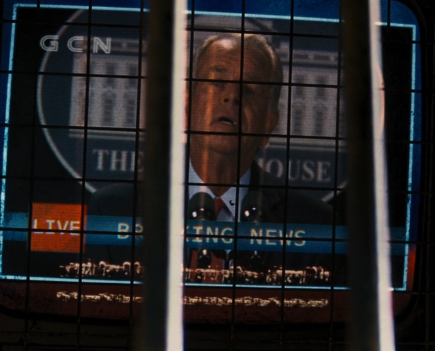 What language is this? It doesn't look like any Indian script (the "Pit" was filmed in India) nor Arabic nor ancient Berber (the prisoners, I have learnt were speaking Moroccan).

My guess was initially that it's either Georgian or Armenian, but after looking at Google Images I am not so sure if it's either of those two languages.

It's upside down and mirrored Arabic script. It can be a number of languages (Arabic isn't the only one that uses Arabic script), and the image is a bit blurry. But after using some serious CSI techniques (zooming in a lot) I'm fairly certain that it is Arabic, just obfuscated. 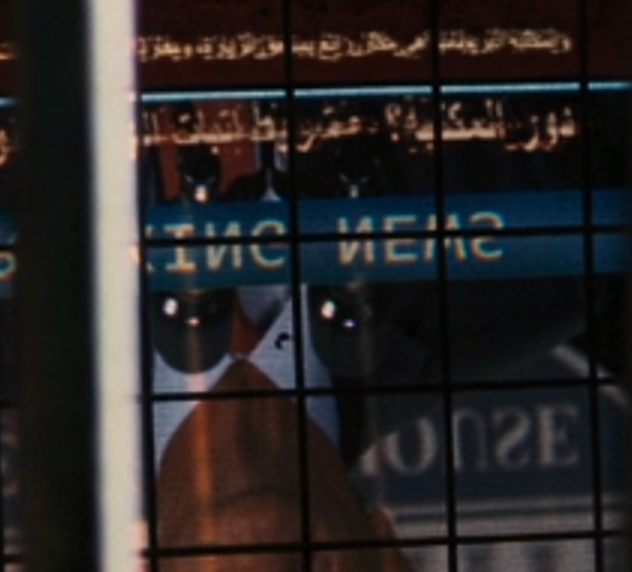 Without knowing the language myself, this looks very much like Arabic to me.

This would fit with the fact that the Pit is most likely in or near Morocco where the official language is Arabic (80-90%). In consequence the international news there would likely be subtitled in Arabic as well.

For what it's worth I had the same question. Tried to translate it once I'd established as above that the text is inverted.

The lower line of text appears to begin نوز المكتبة؟ which means 'Light of the Library?'But unfortunately I cannot intuit what the remainder says. The next word is fairly clear and appears to read مضر which probably means 'harmful'. Don't know franchise well enough to know if these have any resonance with other parts of film's story. Perhaps native speaker/reader of Arabic would be able to make informed guess at rest of text.

I can see that the lower line of text changes 3 times but only one of the lines was clear enough for me to make out some of the text. Can't work out why Arabic text appears upside down. Also the unchanging line above is indiscernable and not in a script I recognise. Maybe it's shapes or pictures, or a made up script? Is there some script/language the Ras al ghoul cult are supposed to use?

For what it's worth there are some other strange things I have noticed in this film, which I've not seen discussion of online:

The one thing that keeps occurring to me is that this discrepancy, as well as many other points in the film, make no sense rationally. It almost feels like the events of the film are happening inside the head of someone, like a dream (or a perhaps a nightmare), explaining these sudden switches from day to night, and even physical questions like the Pit. Moments like these remind me very much of Kubrick and toying with the surface reality to show something else going on, leaving breadcrumbs like the registration of the aircraft to show the presence of a directorial intent.

The Pit, apparently in some nondescript Asian or Middle Eastern country, would be thousands of miles away. Putting aside the fact the film is a compelling fantasy in a made up universe, given the gritty realism of the franchise and setting Gotham in an almost real world setting, it just seems impractical that Bane can duff up Batman and then the next thing he wakes up with Tom Conti 4500 miles away. It makes not much sense. Plus the feat is repeated when Wayne returns to Gotham with no explanation about the journey to get back and get into the city, which is in lockdown. It seems left open to suggest that at least some of this stuff is happening in Bruce Wayne's head. A straightforward explanation might be that the Pit or oubliette is actually in or near Gotham because it's happening in Wayne's mind.

There are subtle visual hints throughout the film that it's tapping into Wayne's traumatised mental landscape. The descent of the black suited fighters into the fuselage of the EMB-110 at the beginning after blowing of the tail of the aircraft is much like the visual shot of Bruce's father rescuing him at the bottom of the well at the beginning of Batman Begins. This would hark back to Wayne's father's question 'why do we fall?', and the choice of title for the film about rising up. The Pit is very much the same, based on the same fears. Perhaps it is a hallucination of Bruce based on the story Alfred told him at the beginning of the film, tapping into Wayne's childhood terrors. The last we see of Bane in this context is when Bruce is going in and out of consciousness, so the Pit could well be a hallucination.

It's shown later that Bane's character helps the villain escape the Pit as a child, but are these meant to be the same physical places? Are they the same hallucinations? Probably not I would guess, although Ras alghoul's cult manufacture hallucinations didn't they? I can't make sense of it. The reason I'm wondering out loud about it is simply because I noticed the Arabic on the TV screen and hoped it might lend some explanation to this part of the film. Why is it upside down? What's the line of text (if it is text) above it? I don't know. All I can see is that part of the text appears to read 'Light of the Library? Harmful.' I don't know enough about the franchise to recognise if this is significant, or help add explanation of the film's story.

The questions appear dreamlike even to the end with the unresolved sighting by Alfred of Wayne in Italy, again based on Alfred repeating a story to Bruce, earlier in the film, in this case specifically about a dream he has had.

Perhaps it's left deliberately unknowable, like a dreamscape, or any story. It's a good film though. Just wanted to post these things in case someone can shed light on these revels. On a positive note, at least if the Pit is imaginary that means that after Bruce escaped it, poor Tom Conti and the other characters aren't left to continue dwelling there forever after!

21
What is the geographic location of the pit Bruce Wayne is imprisoned in by Bane?