How do they film scenes with the actors driving in a car?

I know long ago they would have the car stationary and use a projector screen to with moving scenery to make it look like the car was moving. It was obviously staged, but good enough. I've seen "behind the scenes" video clips and still showing some sort of filming rig on an actual car that isn't on a set, but that seems way to dangerous for anything of any complexity.

So I am assuming they have come a long way with the stationary car on a set, and they mix that with a real car with cameras mounted on it. Is this accurate? If not, how do they make it look so real and still keep everyone safe?

Another common technique is to use a "process trailer", aka an insert trailer or low loader. It is used as a moving camera platform and is towed by a special truck-like vehicle that may contain cameras, booms and or lights. The process trailers are generally very low to the ground to give a realistic perspective of height. They can expand in width to allow a camera to be placed along the side, for example to film actors speaking through a side window. Note the safety bars in the first picture below so the crew don't fall off the trailer while it is moving.

Some companies renting this type of equipment are Action Camera Cars and Shotmaker. 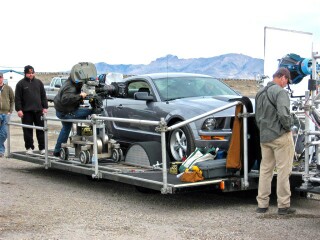 If they only need to shoot from the front, and not from the side, they can dispense with the trailer altogether and simply tow the car behind the film truck: 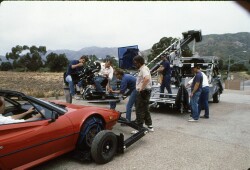 In either the case, the actor playing the driver doesn't actually drive the car, but they must appear to be driving, same as if chroma key was being used with a stationary car on a set.

The technique you are talking about with stationary car on set is called Chroma key compositing or chroma keying:

is a special effects / post-production technique for compositing (layering) two images or video streams together, used heavily in many fields to remove a background from the subject of a photo or video - particularly the newscasting, motion picture and videogame industries.

Although it's a very old special effect it's very used even these days, with a big difference of course. So even today in car scenes technique is wildely used.

There are of course other ways of filming these scenes, when do you want to have maximum reality. One of them is using camera mounts, suction pads and vacuum mounts: 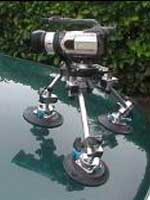 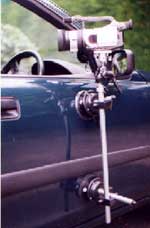 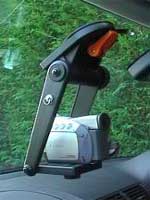 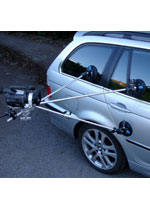 You can film every scene you like with these gadgets.

Process, projector showing a image on a screen behind the actors & car, was the method of yore. Audiences today recognize it. So the replacement is 1. chroma key (image not projected onto a screen but photographically composited onto a green or blue or yellow screen, producing a sharper, brighter, more realistic image. Or 2., Insert Car, towing a picture car on it's own wheels or on a low boy trailer with a walking platform so camera moves can be made while the picture car is towed.

I have worked on a few films that had car scenes. Girl In Woods (feature) was filmed in the mountains in east TN and we used a side car mount that sat on the side of the window frame that was on the camera side. Bigger than the ones in the picture above. I worked on Uncertain Saunter(short) and they had a car hood mount. The mount is cool and in both cases the driver drove the car. We had sound hiding in the car in back. The mounts take a litte bit to put on. We had a lead car and a car behind and we It is very important not to let anyone in between you and the car that is filming.

11
Legality of using fake license plates in movies
13
Rooftop contraption used to simulate realistic driving scenes
12
Why are most scenes in a car recorded with chroma?
5
What do sitcom car rigs look like without effects?
1
Are the driving scenes in the Office filmed while the actors are driving?