Who is the fat guy and what is his importance?

In Donnie Darko, during a failed attempt of a kiss, one fat guy is shown. The same fat guy is shown again in some random scenes. Is he some character from the film which I missed or is it some cameo? Or does this character signify anything?

The movie is pretty complex, so this answer mightn't make sense without a rewatch, but effectively the fat man is an FAA employee (Federal Aviation Administration). We know this as we see him among the group at both the start and end of the film.

The usual explanation is that the FAA are so perturbed by what's happened with the jet engine that they've sent an agent to effectively keep an eye on Donnie and the rest of the family.

From beginning of film: 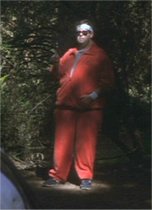 Not the answer you're looking for? Browse other questions tagged character donnie-darko .

5
Who's Tom Bishop's support in China? Is it the same guy he worked with in 'Nam?
19
Who is the third girl in “Black Swan”?
15
A possible Donnie Darko reference to 2002
3
Why is Mayor Quimby still mayor?
3
Was Roohdaar intended to be the replacement of Hamlet's father's ghost?
37
Why do Superman and Batman's mothers have the same name, Martha?
3
Where is Wade from s6e6 of walking dead in season 8?
16
How did this character get so big in Deadpool 2?
4
How did Qi'ra get to Crimson Dawn?
8
Why was Karl attracted to Danny in the game?