Is there any symbolism behind the bunny face? 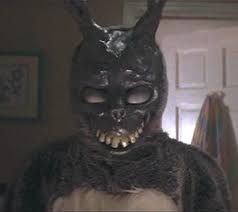 @DustinDavis has given a very good answer, but to focus on just the bunny aspect:

Why is Donnie's spectral guide a giant rabbit? Kelly has said it's not a reference to 'Harvey,' the classic 1950 comedy where everyone thinks Jimmy Stewart is crazy for conversing with a man-sized rabbit that no one else can see. Rather, Kelly said, creepy Frank was inspired by the rabbit protagonists of Richard Adams' novel 'Watership Down,' which was to be taught by Barrymore after the school censored Grahame Greene from her curriculum (a subplot that didn't make it into the initial release of the film). At the time he made 'Donnie Darko,' Kelly claimed he'd never even seen 'Harvey.'

So that's the official explanation as to why Frank is a rabbit. But why is he so creepy? I think his facial design was chosen due to its completely bizarre nature. When the rabbit first appears on screen, the viewer doesn't understand who or what it is. It's a manifestation of Donnie's mind, but beyond that we don't know. Its unorthodox look and creepy style of talking is extremely unsettling and adds to the suspense and drama of the film.

As the film progresses, we see the man behind the mask in the cinema and for the first time it is confirmed that the rabbit is actually a human.

Finally, at the end of the film, we see that it is a Halloween costume and the cyclic link between Donnie's manifestation and the man in the costume becomes clear. The director could have simply had Donnie's manifestation be a shot of the man with a bullet hole in his eye, like in the cinema, but that wouldn't have carried as much suspense or confusion.

The supernatural force that appoints Donnie to end the alternate universe adopts Frank because Donnie killed him previously. As a manipulated dead, Frank knows what is happening and his job is to guide Donnie on his path to correcting the timeline of the primary universe by returning the jet engine to its original universe; Donnie is unaware of all this.

The costume is necessary because it's an essential part of Frank's character as a dead person (it's what he was wearing when he died) and also because it's so alien (not just some guy), Donnie will understand that he's dealing with things beyond normal.

As far as the costume being a creepy bunny, there is no significance in that. Frank was an artist and it was something he was rendering out when we see him in the ending scenes. It just adds a freaky ambiance is all.

Update: This article has some interesting suggestions on how you could interpret the Rabbit costume

What does the rabbit mean? That depends on how you interpret the movie. If you think that the film is a serious exploration of physical/metaphysical reality, you're apt to see Frank as a kind of rabbit-angel. His role is to guide a reluctant hero into becoming the instrument of God. In this reading, God wishes to save earth, and unfortunately (or not) this entails getting Donnie to commit criminal and destructive acts. Within this context, Frank's ugliness might be explained as the destructive side of salvation. Perhaps he is a monstrous rabbit in order to suggest that Donnie himself must become both prey/ victim and a kind of spiritual predator.

If you follow the parallel-universe theme but do not like the religious reading, you might see Frank as simply analogous to the White Rabbit from Alice in Wonderland. The White Rabbit had some scheduling concerns ("I'm late, I'm late, for a very important date") and led Alice down to a bizarre alternative world. Like the White Rabbit, Frank is under time constraints, having only 28 days to get Donnie with the program. And when he first leads Donnie out to the local golf course, scene of Donnie's first vision of him, one could say that Frank has inserted Donnie into the spiral of a new time/space dimension, just as the White Rabbit did for (to) Alice. In short, rabbit hole in Alice in Wonderland is wormhole in Donnie Darko, and both access a new reality.

If you're inclined to see Donnie as just a very disturbed teenager, then Frank is a tad more malicious. He embodies the dark, destructive side of Donnie, imagined as the flip side of the rabbit stereotype: ugly instead of cute, bizarre instead of familiar, destructive instead of reproductive, and so on. In this reading, Frank stands not just for the evil side in Donnie but in all of us.

Not the answer you're looking for? Browse other questions tagged analysis donnie-darko .