In the first Total Recall, there's an unimportant shot where the receptioninst at Recall is changing the color of her nails. She taps one with a stylus, and it "wipes" to a different color. (I can't remember if all of them changed, or just the ones she tapped.) The effect was flawless, and this was in 1990 - way before CGI was being used! Anyone know how they did that effect? 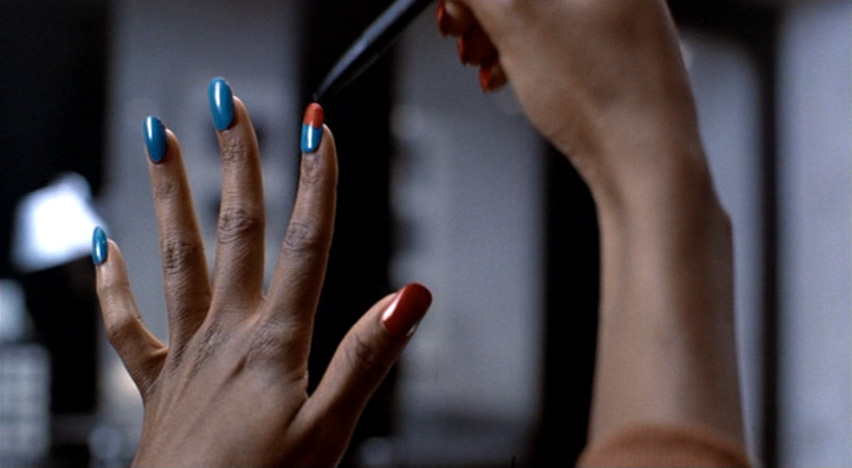 According to Den Of Geek - Top SFX shots:

The nails are rotoscoped to provide an area for an animated colour transition to take place, and that's all there is to it.

Some other examples of "painting" over live-action film that predate 'Total Recall' (1990):

CGI was actually fairly common practice by the 1990s, a watershed period for digital visual effects. Most prominently rendered in wireframe in the 1970s (Star Wars IV, 1977; Superman, 1978), by the mid-80s various scifi and fantasy films employed photoreal mapping effects (Flight of the Navigator, 1986) and were making strides in live action/digital composition and character animation (The Abyss, 1989). We tend to think of CGI in terms of photoreal humans or animals, which look dated by 2010s standards, but accepting that subtler blends of environmental digital VFX were quite common by then, and the industry's relative mastery of green or blue screen (chroma key) compositing and rotoscope animation, it's not difficult to imagine that shots like the nail color change in Total Recall were done digitally.

(The VFX team of Total Recall won the Special Achievement Award for Visual Effects in 1990 for groundbreaking use of CGI as well as an extensive mix of animatronics, stop motion and miniature set composites.)

Traditionally or digitally, the nail color change was achieved with chroma key compositing. Based on the conspicuously saturated blue/orange of the nails, it's likely the actresses's nails were painted green, making it easy to overlay any other solid color in post-production while preserving light reflection.

I couldn't tell you the exact technique they would have used, but I assume they just had an effect artist colour it in post-production.

For the record, CGI was being used in film to varying degrees all throughout the 1980s, though they have said that one of the only CG shots in Total Recall was for the x-ray scanner scene.