Was Nick Fury treated with GH-325?

During Captain America: The Winter Soldier...

Nick Fury recovers from multiple gunshot wounds to the abdomen within a relatively short space of time. Whilst we are shown him in an injured but stable position, was there any indication that the GH-325 drug from Agents of S.H.I.E.L.D was used on him? 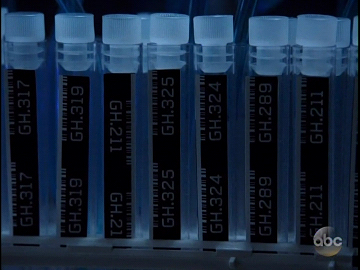 I don't recall seeing a shot that identified its use during this sequence, but why set up something like a 'miracle cure' with the series only to discard it for the film?

GH-325 (which uses Kree blood [told ya' so!, check the rollbacks] as one of its components) regenerates dead tissue and, according to the series, is administered to Coulson under direct orders from Nick Fury, establishing he knows about its existence and healing properties.

Countering this, however, Agents of S.H.I.E.L.D Episode 18 features a scene in which Agent May informs Coulson the reason she was ordered to set up a direct line with Fury was because the Director feared that (as GH-325 was developed under Hydra's supervision) Coulson's use of the drug could have somehow compromised him to Hydra's control.

If this was a plausible concern, why would Fury be happy to use the substance?

Is there another explanation that covers Fury's startling recovery?

Having just re-watched Captain America: Winter Soldier, there is no on-screen evidence to show that Nick Fury was treated with GH-325 from what I saw. I am also dubious that Fury would treat himself with something that he knew caused a lot of problems to those that it was used on unless their mind was completely wiped.

So unless they do some sort of retcon, I think it's safe to say he wasn't.