How does Mike get back from the Himalayas in Monsters Inc?

When Sully and Mike are banished to the Himalayas they discover the closest village is a three-day hike away. Sully uses a sledge to get there quickly, then uses a child's closet door to return to the Monster's Inc factory. Then, just a few minutes later, Mike appears.

How did he get back to the factory so quickly?

This isn't shown or answered in the film.

Likely, Mike followed Sulley to the village and used a different door to return (or found a door that was nearer). This explanation seems the most plausible and doesn't require too much explanation on the writer's part (allowing viewers to believe for a short while that a "wedge" really has been driven between the two protagonists, before Mike's sudden reappearance).

There are multiple ways in which Mike could have gotten back to the Monster World (powering the door from the outside is shown to be possible in the prequel, Monsters University), but for me the most likely way is that he simply traveled to the nearby village and used an active door to return, in precisely the same way that Sullivan did a few minutes earlier.

Although the Yeti said that it was a three day hike, there's plenty of ski gear in the Yeti's shack that Mike could have used to make the journey more quickly: 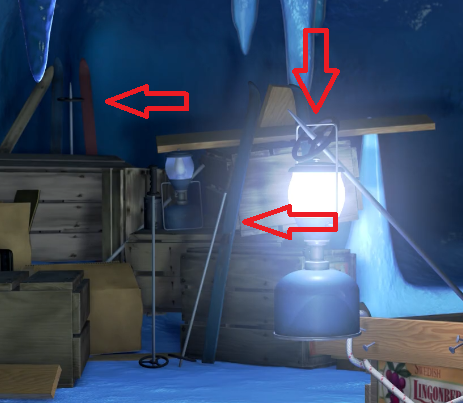 We also know from the film script that there's at least two other active doors in the village when Sullivan arrives:

Sulley lies motionless in the snow, the wind howling through his fur.

A child SCREAMS in the distance. Or was that the wind? Sullivan slowly lifts his head.

Another SCREAM, this one louder than the first. Sullivan's eyes widen. Through the snow, Sullivan can barely make out a SMALL TIBETAN VILLAGE.

INT. SCARE FLOOR George Sanderson leans on his crutch, nervously trembling as he stands in front of his door with his assistant, Charlie.

CHARLIE: Oh, come on now, George. I know you can do this! I picked out an easy door for you, in Nepal! Nice, quiet Nepal.

I googled this to see if I was right or not, I have NOTHING to back me up on this but I SWEAR when I saw the film in the theater I remember a scene in which Mike comes out of the Yeti's cave to apologize to Sully, then trips and begins rolling down hill, gathering snow, and he becomes a giant snowball rolling closely behind Sully, arriving moments after him. I SWEAR. I remember he even had a yellow someone snowcone in his hand when he tripped . . . maybe this scene got cut from the DVD? It makes sense and I SWEAR I remember this scene.

Not the answer you're looking for? Browse other questions tagged monsters-inc .

9
What characters in Monsters Inc. have cameos in Monsters University?
5
Why is Sulley the only monster in the Monsters Inc films to have a nose?
3
Why does Mike Wazowski correct Randall's insult of 'cretin' to 'Cretan'?
12
Any meaning in the 23-19 code in Monster's Inc