Why is Canada dire?

In The Stick of Truth, there are many things dire about Canada, dire wolves, dire bears, dire snakes, and dire AIDS.

You know what dire wolves are, right? They're like wolves, 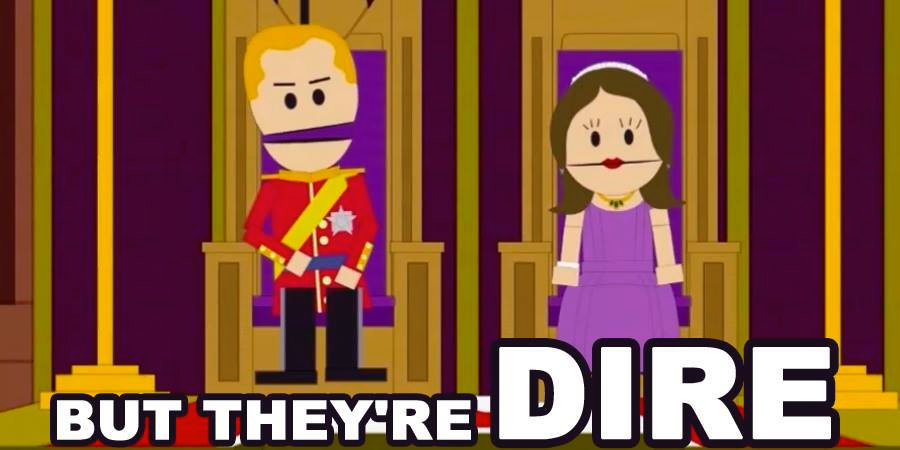 There are a million references in Stick to things that happened in the TV show, but I can't remember what episode this is from.

Stick is using a play on words of 'Dire'; deploying it in the D&D manner of which TylerShads describes (no doubt inspired by GoT), but also in its common usage of meaning terrible.

If someone is in Dire Straits, their situation is considered dreadful. Dire is traditionally used to indicate the relative lack of quality, promise or effort of something. To say Canada is 'Dire' is to say it is a terrible place.

Southpark is well aware of this dichotomy of language: a Dire Wolf could be represented as either a fearsome beast (terrible because it is so frightening, terrifying) or as a dog with no legs (a terrible, useless wolf).

Both would be terrible wolves, but with each definition of terrible informed by the context of its deployment.

This is the wordplay Southpark is trying to suggest/lampoon with such things as 'Dire Aids'.

The term Dire is a Dungeons and Dragons trope where a beast that is larger and more powerful than a standard beast is known as a Dire beast-name-here.

Therefore, it must just be a play on this joke due to the subject matter of this game being a parody of a lot of gaming tropes, especially of the fantasy-type.

This may be a reference joke to Game of Thrones, which they've taken the liberty of expanding on. In that series they have "Dire Wolves", which is essentially a very large wolf. An adult Dire Wolf would be about the size of a small horse. They're also very deadly, and extremely capable of killing, which in and of itself, should you run into one, would put you in a dire situation.

The image you provided was taken from the "Stick of Truth" game, not from the TV episodes.

There are few episodes of South Park that portray Canada as a really crazy place, but I don't remember seeing anything dire in any of them. The Wiki also doesn't mention anything about it.

The "Stick of Truth" was written by Trey Parker and Matt Stone as any other South Park episode, so this is probably just another new joke about Canada.

Not the answer you're looking for? Browse other questions tagged south-park .

8
Why is the choir in South Park episode 301 called “Getting Gay With Kids”?
20
Why do Canadians have hinged heads?
6
Can using fake names or pseudonyms in the credits really protect you from legal troubles?
29
Kenny stopped dying. Why?
2
Why did the South Park movie make fun of Mahatma Gandhi?
4
Travel between South Park and Canada
10
What is the meaning or symbolism of people giving Money to Tweek and Craig for being gay?
0
Why does PC Principal crosses his arms in this way?
36
What did Cartman mean here by Rainbows?
7
In South Park S7E6 “Li'l Crime Stoppers”, why does Cartman stick up for Kyle?