What was the little boy Andy trying to do at the end of Snowpiercer?

At the end of Snowpiercer, the head of the train protruded and Andy climbed in. Curtis tried to stop Andy from doing so, Wilford suggested that was the task Andy was given.

What was that task?

This explanation (and this question, to be honest) are pretty 'spoilerific', so whilst I'm aware SE is a spoiler-tolerant site, I'm gonna go ahead and throw up a courtesy flag to anyone thats anticipating seeing the Movie: it's taken an age to get to the UK, and I did all I could to not ruin what turned out to be an awesome movie.

Earlier in the story, Wilford explains the wider ramifications of the train's operation during a lengthy piece of dialogue. This takes place in the 'Engine-Room', the heart of the train which turns out to be the clean-room of Evil itself. 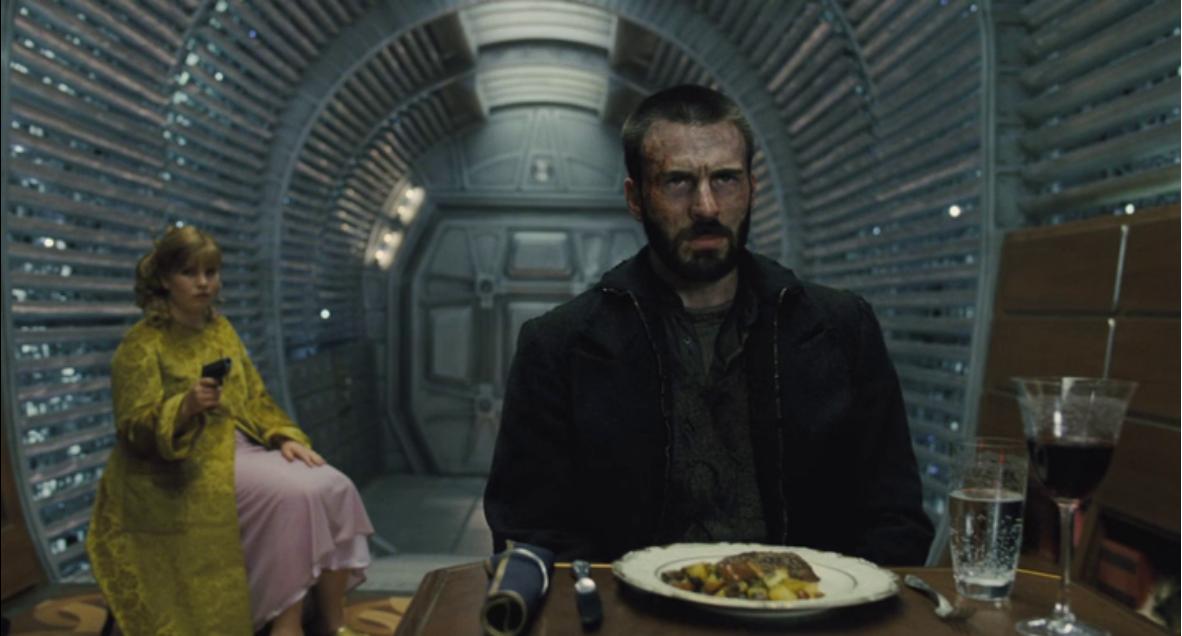 During this scene, Wilford explains that the most important function of the rear-carriage was the continuation of a precious resource, children; and in this case, children whose removal would not cause undue discomfort to the more-noseward/higher-class citizens standard of living. The train is equipped with a perpetual motion engine, and as such there is little need for an 'industrial' class of citizen; which could be interpreted as working class/ blue collar workers/society.

What the engine does require from the rear carriage citizens, is children small enough to carry out the "manual work " for the engine's operation and maintenance. Curtis is a class warrior, fighting for the rights of the lesser citizens and, ultimately, totally unable to comprehend the disparity between the living conditions of the more-noseward/higher-class occupants of the train and the dismal ghetto like existence of the rear.

The realization that, from the perspective of the controlling forces of the train, the rear carriages are just another industrial area farming children for labor exploitation is a concept that cripples Curtis. He realizes that not only was the revolution an accommodated one, the rear carriage class is genuinely little more than cattle: it's children the Veal that the Train dines on. 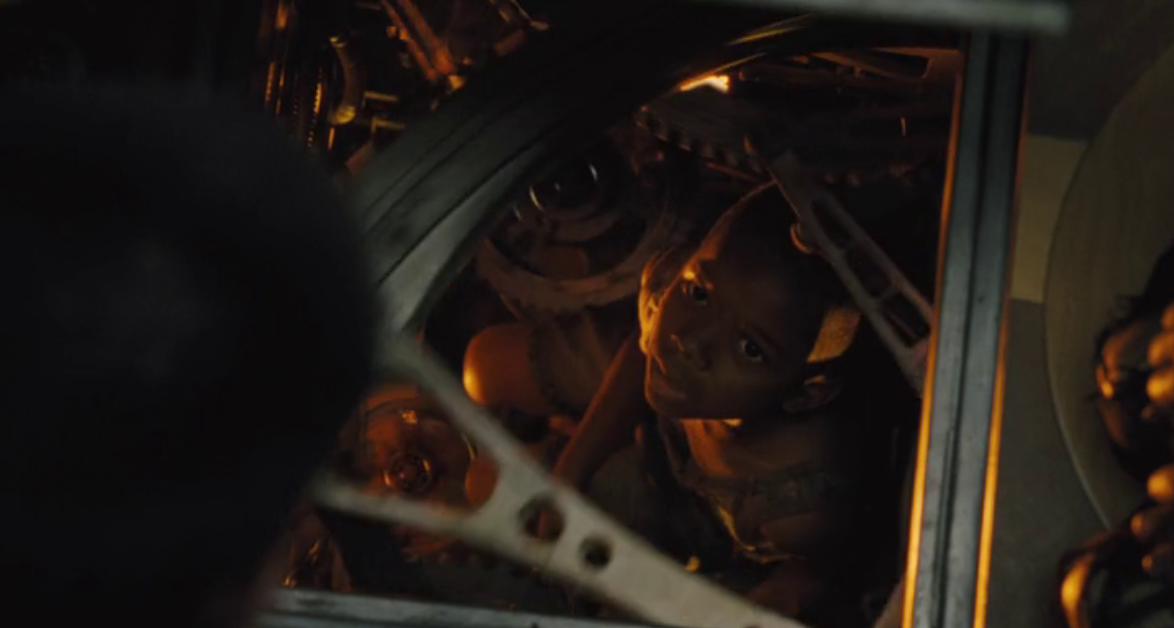 When Curtis finds Timmy he tries to remove him from the workspace, where he has been substituted for the functionality of a failing part, or at least integral to its operational maintenance. Curtis' disruption causes a critical failure in the engine, and the nose of the engine begins to protrude inwards, revealing another small crawlspace for a child. 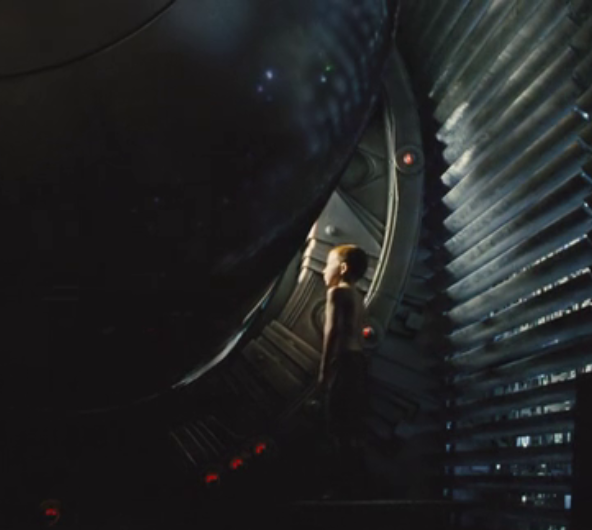 It is at this point that Andy climbs out and enters the crawlspace, unflinchingly and pragmatically resuming some form of manual control over the engine's operation. Given the lackadaisical attitude to child welfare in the uppermost classes/carriages, it is implied this occupation is a grave one. The exact nature of the task Andy carries out is irrelevant: it is the fact he does so willingly and with lucidity that makes is grim task so mortifying. 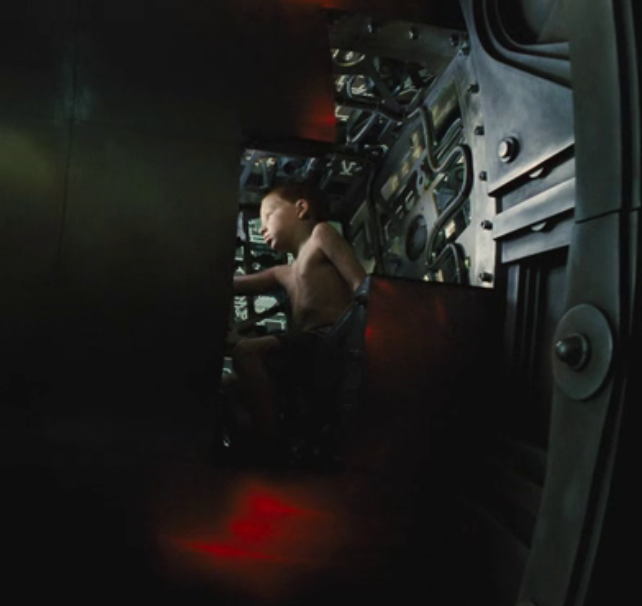 By disrupting the operation of one function of the engine (albeit doing so to save an innocent), Curtis has created a vacuum of control which is in turn occupied by another innocent child; a metaphor for the futility of resistance in a system predicated by the necessity for sacrifice. The Borg would be happy.

In Marxist terms, its the exploitation of Arbeitskraft. In leyman terms, its a message about how (within hierarchical societies) controlling powers don't prioritize the conditions from which lower-classes provide a workforce, as long as it provides one and remains useful.

Andy was simply a child that had been convinced to give his life for the continuation of a way of life that was totally oppressive to his own circumstances. Take from this film whatever message you will, but that is, horrifyingly, the intended one.

Later, the guards come looking for some kids to take to the front section for some work. Well, what's happened is that the perpetual engine is slowly dying. Many of its parts are past the point of repair and are replaced by kids doing the labour manually (kids can fit into the tiny places). Wilford's assistant comes to measure the right kid for the job - Tim and Andy.

Wilford explains how the engine might be eternal, but its parts are not, and they need to be replaced by small kids because of the spacial restriction. He also explains how the tail section provides a constant supply of children.

Tim and Andy have been picked for specific jobs, to replace some of the mechanical components that have gone bust. While Tim is under the floor performing a mechanical operation, Andy goes into his compartment in the engine to do his job. They are literal replacements for kaput mechanical parts.

The kids who are working on the engine parts are kept in some sort of a trance to keep them from running away.

We can see this when Andy wakes up and walks to his engine component like a zombie and doesn't respond to Curtis' calls.

In a nutshell, this symbolizes forced child labor.

13
How did Andy know for sure that the tree in Buxton was still there after 19 years?
37
Why did the train need to keep moving?
9
What did Nam see in the greenhouse?
12
Did Yona (Go Ah-sung) have supernatural/special powers in Snowpiercer?
2
What was Bartender/Temporal Agent's last mission?
4
What did the polar bear signify at the end of Snowpiercer?
4
Why didn't Wilford use the back of the train just as a breeding camp?
9
Would Andy be shielded from the law in Mexico?
12
What exactly is the old man at the end of Dunkirk going through while distributing food to the survivors?