I remember watching a movie a while ago about "intelligent" dog like aliens with like a spike or weapons in their tail (like a chimera) who had their home planet colonized by humans.

The humans nearly wiped them out but a few survived and the humans set up a perimeter grid to keep them out - movie is about how the protagonist has his family (wife and child) killed by the alien/s when they attack whilst he is off world. They break through the defences and revenge for the attack on their species - rest of the story is about how the protagonist hunts down the alien that killed his family.

Really good sci-fi movie that makes you think about how the aliens felt while their world was being wiped out just to make room for the humans.

Anyone know the name of this movie?

A bit of a cross between pitch black and star ship trooper style - but it is not Starship Troopers. 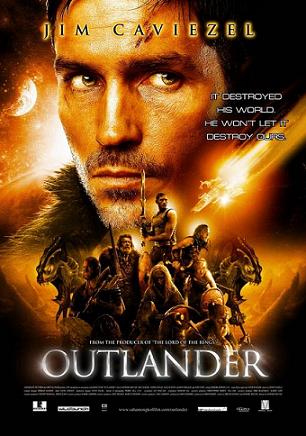 In 709 AD, in the Iron Age, a spacecraft crashes in the Viking kingdom of Herot, Norway, and the pilot Kainan survives. He turns the beacon on; learns the language and culture of the planet using a machine; and finds that the predator, Moorwen, that he was transporting, had escaped. While chasing the alien monster, he finds a village completely destroyed and is arrested by the warrior Wulfric, believing that he killed the locals - Kainan is brought to Herot as a prisoner.

From this page, the details you mentioned:

Kainan's people came to the Moorwens' world to establish a colony, killing the natives and claiming the planet for themselves. As a reward, Kainan's wife and son were given a home in the new colony, while Kainan and the armed forces left for other conquests. Later, one surviving Moorwen slaughters all the colonists, including Kainan's family. Kainan was dispatched to capture the beast and was returning with it to his homeworld when it broke free and caused the crash.

Most of what you've described takes place in flashbacks, but otherwise it's a perfect fit.

You can browse through many more screenshots here.

Read more about the movie here, here, here and here. Watch the trailer here or here.

6
Has there ever been a movie in which humanity found a "Golden Record" of another species?