German movie about female assassin who frames a man [closed]

The movie takes place in Germany, they visit Cologne. The movie was filmed probably around 2005 or 2006.

The killer is a woman with long dark hair and uses a bow and arrow at some point. She's a good fighter and shooter and is really good looking. The man is young, tall and has brown hair.

She meets the man (right after he had a fight with his girlfriend, a blonde woman). They have sex and when he wakes up in a hotel room she has left the room, he gets a call from her saying someone was killed in the hotel and that he must escape, he doesn't and gets arrested. She has framed him, he is now believed to be a professional hitman responsible for many murders. On the way to the police station the woman kills the police officers and kidnaps him. She takes him with her to also frame him for the other murders she still has to commit. When this is over she wants to retire and needs him as a patsy. The police and his girlfriend are after them. She kills another victim and there is a final scene with a fight between the 2 girls. Happy ending. 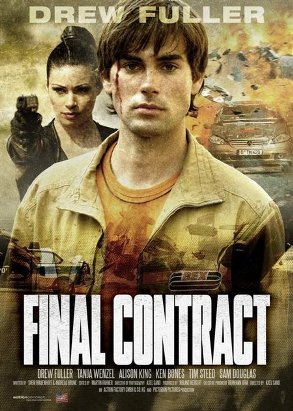 From this page, the synopsis:

David is broken up over the fact that his girlfriend is moving away. He eventually meets up with a sexy woman who embroils him in an adventure that may cost him his life.

From this review, here are the details:

David is in Berlin, Germany working at his Uncle’s business. He has a crush on college-bound co-worker Jenny, but can’t bring himself to tell her.

He soon gets into all sorts of nutty trouble when he picks up undercover cop Lara during a wacky car chase.

Except it turns out that Lara is not a cop after all, but a notorious contract killer who is in Berlin to off three government witnesses.

Lara has already dispatched two unfortunate souls, and has conveniently framed the second body on David, who had gone to bed with Lara the night before and is seen carrying the tools of Lara’s trade.

Now the cops are after our hero, believing him to be the culprit... 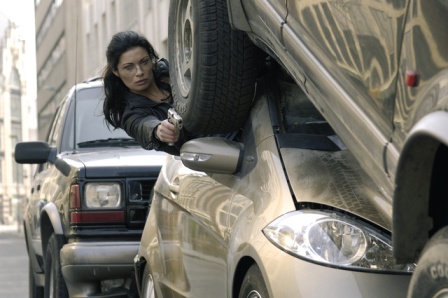 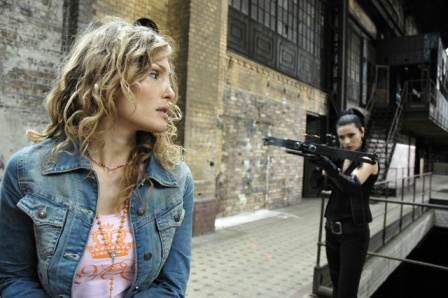 The movie's also known as "Dark Ride". Watch the trailer here to confirm.

Not the answer you're looking for? Browse other questions tagged action identify-this-movie .