What was Nicholas Van Orton's real birthday date in “The Game”?

In The Game, There are two dates mentioned as Nicholos' birthday.The first one is October 11th, which is mentioned while Nicholas and Conrad has a chat at the hotel.

Conrad: and all the sudden it click... October 12th...Nickie's birthday.

But, at the end of the movie the birthday invitation shows it's October 20th. 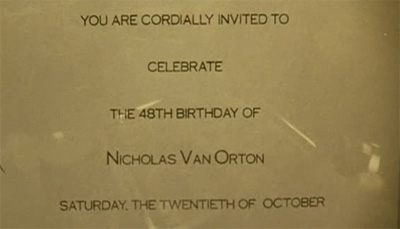 Which one was Nicholas' real birthday date?

Does it mentioned intentionally wrong?If so,What was the purpose for that?

It's October 11, as Nicholas states. The celebration takes place later, on a Saturday for convenience (the 11th was a Thursday).

Not the answer you're looking for? Browse other questions tagged plot-explanation the-game .

7
How did Conrad come back to life after the gunshot in “The Game”?
11
Ending of “Bad Lieutenant: Port of Call New Orleans”
20
Was the chip real or fake?
11
How come he didn't use the most obvious solution to “grasp” time - dates?
5
What was Mary's real intention?
4
Why did Herr Starr do this to his date? What was he about to do?
6
What happens to the Jumanji game module?
6
Why would they assume Janet van Dyne was still alive?