Just finished watching season 4, wrapped it up nicely. But I'm a little confused about Starbuck.

She was not a Cylon, but she died and came back. Was she supposed to be an angel?

There is no official answer to this question. The two main schools of thought are that she's either a nod to the Seraphs from the original series or - without spoiling too much - she's the same as messenger Six and messenger Baltar. I think it's a bit of both personally, with a dash of we didn't know what to do with her.

Starbuck is some kind of "Angel": An oracle, a messenger, a goddess, and/or prophet. She is one of two counterparts that exist across space & time. The other being Pythia (Saul's Mother) who existed right before the 13th Tribe's exodus from Kobol. Together they make up a long-term being, "Aurora, Goddess of the Dawn."

Aurora is the goddess of the dawn, and possibly one of the Lords of Kobol.

When Kara Thrace visits the oracle Brenn in Dogsville, she touches a small winged icon of the goddess, which is then given to her by the oracle.

Thrace later gives the icon to Admiral William Adama as a figurehead to place on the bow of the model sailing ship he is building (Maelstrom).

After Thrace's mysterious return, she is given command of the Demetrius to search for Earth and Adama gives her the figurine back. She keeps it on the table in her cabin and plays with it when she is frustrated about the lack of success ("Six of One", "The Ties That Bind"). 1

According to the book of Pythia, a temple dedicated to Aurora exists on Earth, built by the Thirteenth Tribe. When the Fleet arrives there, they find a ruined city with the remains of this structure (Revelations).

In the tie-in Final Five Comic, readers get insight into the Thirteenth Tribe's Exodus to Earth 1 and Pythia's relationship with both Michael Tigh and Messenger Six. It begins with her trial, in which she is then somewhat in parallel to Gaius Baltar (and by extension to Caprica Prequel Series: Sister Clarence Willow, Zoe Avatar, and Lacy Rand). 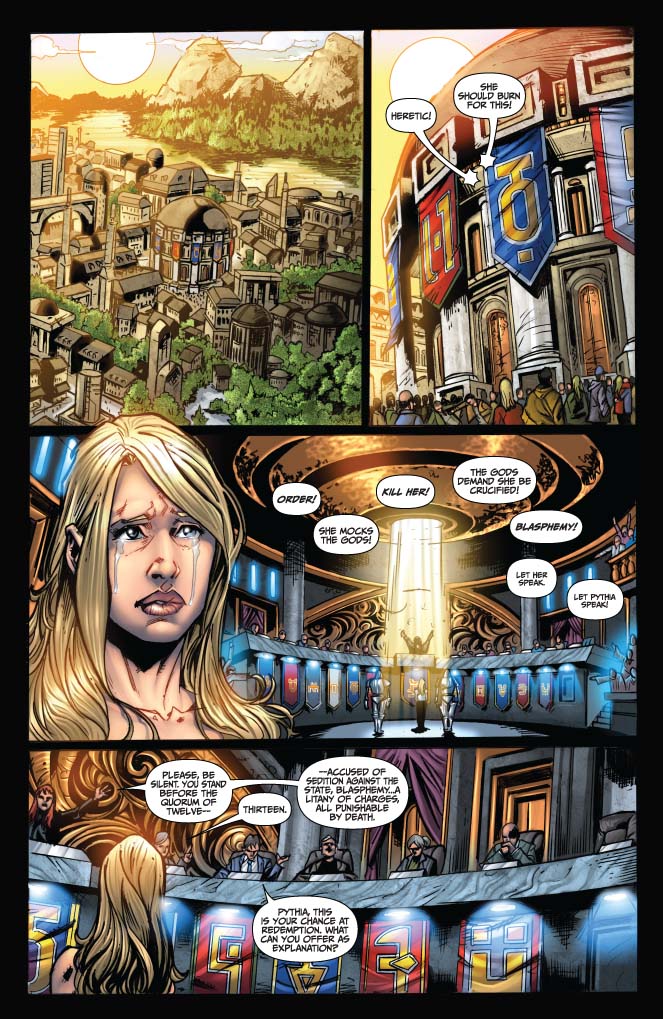 The Comic then continues to show how Pythia died, but miraculously appeared in front of the Thirteenth Tribe on their way to Earth, helping to lead the way and living out her life there. Messenger Six then tells Michael Tigh, "Now do you understand? She's one of us. You call us the Lords of Kobol, but we prefer other terms. We don't involve ourselves in your petty affairs. We simply...offer guidance. But there has always been one who couldn't follow the rules. Who couldn't ignore her low basal urges. We call her Aurora and it seems she isn't willing to let you fail. That isn't the women you loved. She's a rogue imposter. A rogue God."

And later Saul tells Ellen while remembering Pythia holding him as a boy in a flashback, "She saved us, there is no denying that. How that happened, what she was...I don't know. What I do know is how she left us. Without Pythia, biological reproduction would have been impossible. She helped us reengineer our genome. Fixed what was lacking."

Pythia was an ancient oracle, believed to have been one of the writers of the Sacred Scrolls, some 3,600 years prior to the events of the Miniseries and the destruction of the Twelve Colonies of Kobol.

Pythia's writings are both obscure and yet well-known: obscure, in that her entire writings are not widely studied among modern Colonials, but well-known in that extracts are widely quoted, often out of context, such as the following:

"All this has happened before. All this will happen again."1 Key to Pythia's writings are two passages, relating to the exile and rebirth of the human race:

"And the Lords anointed a leader to guide the caravan of the heavens to their new homeland. And unto the leader, they gave a vision of serpents, numbering two and ten, as a sign of things to come." 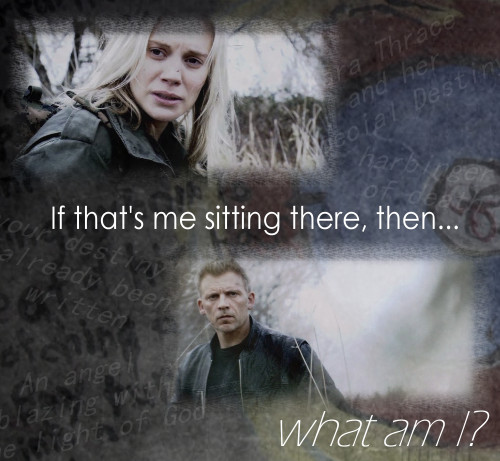 At the end of the day Battlestar Galactica is a Space Opera with a cycle cosmology story. So it is about entities being able to exist in all kinds of ways in order for "fate" to run through itself and eventually "break" a cycle. "Starbuck" like many of the characters is one facet of this idea. She's not a "cylon", she's not completely an astral projection like Messengers Six, Balter, and Zoe, and yet she is not limited to "corporeal" limitations.

In addition The Caprica prequel series tries to break things down further. At first it seems like a "messenger" could be created (at any time in any society) just like a digital avatar could, as we see Zoe A and Tamara Adama able to live in on in V-World. But in truth Caprica doesn't make that possibility clear and we also end up with a "messenger" Zoe existing prior to Avatar Zoe, leading both Zoe & Avatar Zoe. Not to mention Messenger Zoe can project in front of another in either the corporeal world & V-World!

Both series also make an interesting correlation with people surviving the unsurvivable, such as in "blasts". Starbuck ends up having 3 variations of her existence: Lee watches her get torn apart in the Nebula, Starbuck claims she went to Earth and came back (in her brand new Viper), and then we she her viper and body burned on Earth 1. Baltar somehow survives the blast on Caprica (pilot episode), and then Tamara (and Zoe) also somehow exists in V-World after the bomb blast, without having her digital footprint "completely" created by someone else. It's as if her soul literally copied to virtual reality without much help from an outside source, as Zoe Graystone worked and worked on hers.

In any case we have to assume that the universe has "a plan" and that people who are supposed to exist, in any way shape or form, will, and that the point of this was to see something "biblical" in the sense that they could exist even when the laws of physics say they should not! Starbuck's situation is bit more of an enigma compared to a lot of the characters' situations, but something similar might be seen through Zoe's and Hera's roles, as in a lot respects, Hera gets the life with her parents and without technology/corporate corruption, that Zoe never gets.

She is, as I've often taken from watching the series, a time traveling Cylon from the future. Capable of downloading into a new body after death, but highly evolved to the point of being completely organic like humans. She represents the paradox of the Cylon universe "what has happen before, shall happen again".

Unlike current sleeper Cylon's that black out when their program triggers them to take action she has visions and makes her own decisions. She represents the evolved state of being able to have both free will and a destiny at the same time.

She's the first hybrid her dad was a Cylon. So she gets her own rules.

I think that when her ship was destroyed near that black storm of some sort, which I'm assuming was a black hole she did die. However, the fact that she died near/in a black hole can account for her dead body and busted up ship being on the 1st earth planet. As we all know that in any sci-fi show, black holes can bring you to any place and or time in space. That black hole took her there and it duplicated her body AND ship, which would explain why it was brand spanking new when she came back with it. I stand by all of this as my theory, however I’ve never seen the original series, just the remake, so maybe there’s something else that explains it all. I don’t like how she just disappeared in the end. I’m going to go with when she came back, she was basically an angel, but not an angel for the whole series.

9
How did Starbuck come back?
3
What really happened to Michael's mother?
6
Why did Liber8 attack the police?
8
What happened in "If I Stay"?
2
Is it possible to start watching Battlestar Galactica (2004) at Season 4.5 and understand the rest of the series?
2
What exactly happened to Ronnie in The Flash?
4
Why is Lucifer's mother behaving so strangely recently?
5
Why Did Starbuck Grab the Ejection Handle?
4
Why Did 'Lucifer' Season 3 End the Way It Did?
6
Does the Forest Spirit die at the end of Princess Mononoke?