Was this movie the first usage of screen projection?

"The Forbidden Planet" came out in 1956, and there is a particular visual effects shot in the movie that was ground breaking at the time. Projecting live action onto a painted background, and I've always thought this was the first usage of this VFX technique in a motion picture. Particularly the way it was done, which I'm not sure how it was done, but I think it involved filming the live action with a painted glass plate as the background.

Here are the shots I'm referring to: 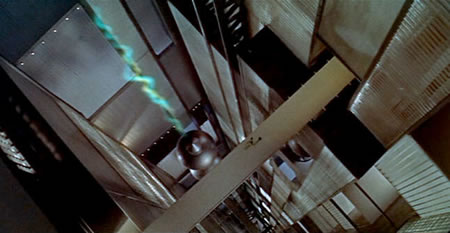 I found an interesting blog on the matte paints done for The Forbidden Planet. With some amazing work in progress shots of those scenes. I hadn't seen these before.

That article does point out on interesting point about one of those shots, and that was a MOVING CAMERA. I think this is what I was looking for, and might be the first time a moving camera was integrated with a live action matte painting effect.

I had to watch Forbidden Planet again, and the mattes you reference are indeed combined with moving, live-action shots and enhanced with animated effects. I know that The Wizard of Oz predates Forbidden Planet by 17 years - and Metropolis predates it by 30 years.

Your link (and several others I followed) turned out to be quite fascinating and enlightening.

Ultimately though, I think the first use of rear projected matte paintings was by Georges Melies in his films from 1902 - 1904.

You can read more about his techniques here.

That said, if you are specifically looking for a film that includes a moving matte combined with live-action, then The Prodigal was released a year earlier in 1955.

One particular shot involves a large matte painting that is combined with a slow pan right to left and ends up in the bedroom of Lana Turner, all the while including live action plates that have been rear-projected into the scene.

9
What was the first movie to use a cross-cutting technique like The Hours?
31
First use of on-screen text messages, like in Sherlock and House of Cards
6
Lady in the Lake 1947 (Mirror Scene)
8
What was the first movie entirely shot from a first person POV?
7
Was the final shot of Halt and Catch Fire S3/Ep8 done with a green screen?
8
How do the SAW movies achieve dismemberment on screen?
7
When was "teal and orange" first used for night scenes?
8
Was the Altair 8800 computer named after the Planet in the movie Forbidden Planet?
5
First Movie or TV Show to use "The Volume"?
2
How was this scene from The Office done?