What was the function of the Cop Uniforms?

In True Detective Episode 4, an undercover Cohle is made to prove his criminality by assisting Ginger and the Iron Crusaders lift a crack den, resulting in THAT sequence...

But why do the Iron Crusaders bother to wear the Cop Uniforms?

The Bikers look no where near convincing in the Uniforms, and don't even seem to bother acting in any way like Police Officers. They behave like raiders, and don't even arrive in a Police Vehicle.

Cohle himself, doesn't even wear a Uniform, and he seems to be the point man of the operation, so they don't seem to be trying to pose as officers. 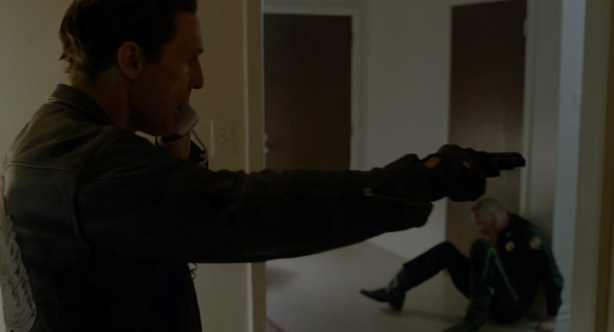 I thought perhaps it was some kind of 'calling card' from the Gang, but it seems to be presented as something novel when they explain their plan to Cohle...

I also suspected it was just a way of disguising their true status as Iron Crusaders by wearing clothes not formerly associated with the gang, but Cop uniforms seem quite elaborate for this purpose.

Was there actually any purpose for the facade?

Their entire modus operandi was "shock and awe". And believe it or not, police uniforms make for quite good shock and awe! Just for a minute try to picture a few cops, brandishing firearms, a goon in tow. There body language is very aggressive and seem to be on a raid. Now in any black neighbourhood that is known to have gang affiliations and illegal activity going on (which was pretty definite in this case), people would duck for cover or scoot to their home rather than confront the cops.

Rust's pals were banking on the fact that their appearance would at least make the people in the hood think twice before firing at them. Not a single soul, in that mayhem would had or did say, "Officer, may I please see your badge...". I agree the uniforms didn't make them look like bonafide law enforcement officers but it sure as hell did make the people second guess themselves. What was an out-and-out robbery, for a while seemed like a night raid.

Rust knew that as long as they made it a snatch and grab they would make out of it scratch free. By the time somebody got their heads around the facts that these guys didn't look like cops and weren't driving a cop car, they would be on their way out.

So yes, the cop uniforms were very necessary as a tool for creating that effect.