Why did James Moriarty decide to end it this way?

At the end of Sherlock S02E03 it simply doesn't make sense for me that James Moriarty killed himself. I mean, for me there is nothing greater than life, so why would he kill himself?

I understand that James Moriarty may be brilliant and insane, but insanity doesn't seem like a valid enough reason to commit suicide. Especially if Moriarty was so smart, couldn't he guess that it might be possible for Sherlock to fake his own death after all, and hence have the ultimate last laugh?

(I've only watched up to the first episode in season 3 and I hope the answer doesn't lie in the second or the third episode of season 3.)

The answer is in season three:

He didn't kill himself.
He returns at the end of episode 3, season 3.

Sorry for the spoiler, but watch the show, right?

The question and one answer were both posted by people who admitted they hadn't watched season three. Careful what you ask as the guidelines warn that these sites are spoiler-prone.

I'm not claiming my answer is 100% true (Moffat is a clever son-of-a-gun), but this sheds light on the possible "reality" of the situation.

After a video signal takes over London's screens, we have to question what we thought we knew.

A version of Moriarty's face reciting "Did you miss me?" in a variation of vocal tones and speeds. 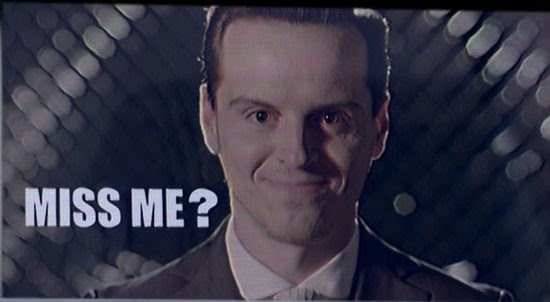 And after the credits is a more compelling conclusion:

A non .gif or Max-Headroomy glimpse that he's back: a clear image of Moriarty looking directly into the camera asking "Miss me?" 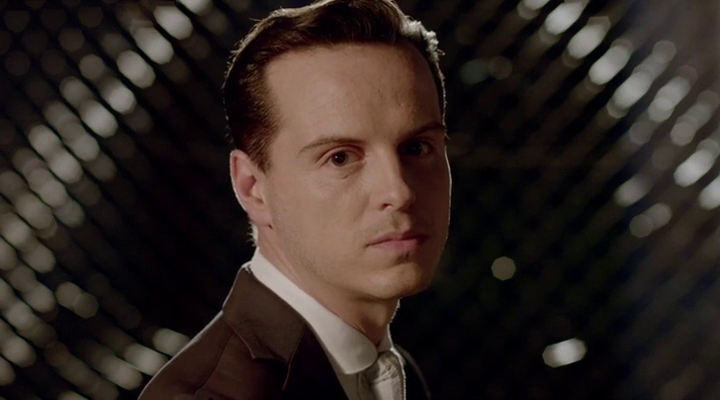 I'd be remiss and regretful if I didn't also acknowledge the brilliant use of the false ending. Maudlin music, fading to black, the drums for the end-titles kick in and TV static and we're back in the show for a mad twist. BRILLIANT! I know Monty Python was spot-on with this misdirection, but don't remember a dramatic show using this device. (Could be a question on its own?)

In light of Meat Trademark's answer the following discussion about Moriarty's motivations might be moot, but I'll still stand by this answer in order to give a valid explanation in light of the existing 3 seasons, disregarding any future revelations.

The main point is indeed his insanity. First of all, insanity can be a reason for pretty much anything, especially suicide. But to be more specific, Moriarty's ultimate goal was to win against Sherlock in a battle of wits. As Keen says in his answer, Sherlock reasons about the possibility for Moriarty to call back the assassins and thus for Sherlock to not have to kill himself. So as long as Moriarty lived, Sherlock wasn't broken yet. So Moriarty leaves him with (supposedly) no options left when he kills himself, thinking that he has finally defeated him mentally.

And in fact Moriarty's brilliance was his insanity, or to be exact, his judgement of his brilliance to be more important than his life. For him there was something "greater than life", it was to win against Sherlock Holmes. There are enough examples, be it in history or the movies, of people sacrificing themselves for (what they think to be) higher ideals that are more important than their own lives, and James Moriarty is one of those.

So the question is not if we would do the same or what we regard highest in the world, but if we can understand why he did so given his portrayal throughout the show, and for me this was a perfect ending for him, nobly sacrificing himself for the ultimate win (the biggest problem I would have with doing so was the inability to make sure that I was successful at all, which unfortunately for Moriarty, was not the case).

As to the updated question, Moriarty might have been very smart, but he also was extremely arrogant in his believes that noone, not even the great Sherlock Holmes could beat him in a battle of wits. When he killed himself he actually thought that he had considered (and prevented) each and every possibility for Sherlock to solve this final problem. In retrospecitive one could say it was a stupid idea to kill himself without being sure that Sherlock couldn't survive, but Moriarty really was 100% sure, blinded by his arrogance and superior intellect and his insane will (and confidence) to prevail over Sherlock.

21
Why did the writers choose this development for Moriarty?
6
Couldn't Sherlock just verify his choice of the bottle by the chemical analysis (Study in Pink)?
5
Why did the Indians decide to end it this way?
5
Are the plots of future Sherlock episodes going to be much more by Steven Moffat than Sir Arthur Doyle?
7
How is it possible that Magnussen can blackmail so many people without actual evidence?
10
Why did Sherlock fake his death this way?
2
At what point does friendship become "queerbait"?
3
Is James Moriarty gay, in BBC's Sherlock?
6
Why did Nelson 'Big Head' Bighetti (and other Nucleus employees) get settlements?
20
Is the Cluedo joke in Sherlock's "The Hounds of Baskerville" a random gag or is the game genuinely broken?