Has Daryl ever fired an arrow and not recovered it?

The only time in The Walking Dead that I can think of that we didn't see Daryl recover the arrow he has shot was when there was the hanging walker in the tree. However, I don't think that there was anything shown that precludes him from recovering that arrow. Are there any confirmed instances of Daryl firing an arrow and not getting it back?

When we first see Daryl with the crossbow he is using manufactured bolts, with colored plastic fletching. Later we see him making his own wooden bolts with feather fletching. So clearly he did not recover those bolts, which are probably lighter and stronger than anything he could make out of wood. So we can assume he lost more than the one used to shoot the zombie hanging from the tree.

Later there are opportunities for him to recover a stock of manufactured bolts, from Woodbury, and also there is a crossbow and bolts taken by Rick from Morgan's weapons stash found when they go back to Kings County.

Here is a picture of him with manufactured bolts, I think taken from a raid on Woodbury - so Season 3 (but I can't be sure): 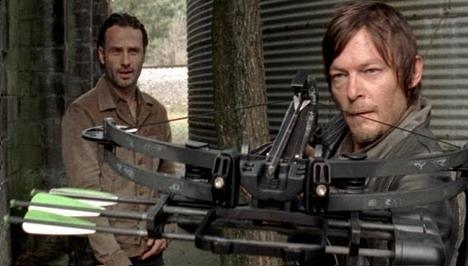 .. and here are the bolts he made himself, looking like he is outside Hershel's farm from Season 2. My conclusion from the fact that in Season 1 he clearly has manufactured bolts, that he does go through them, but makes his own when he runs out. 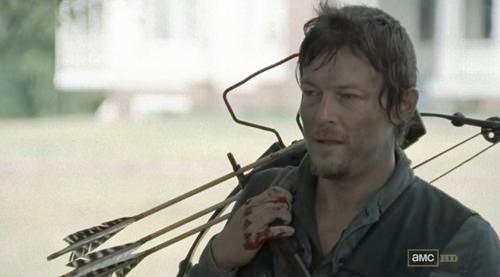 I just watched the rerun of the episode where he had to kill Meryl. Just before he saw Meryl in walker form, he shot a walker in the head. He is never shown recovering that bolt.

Yes, in the 3rd episode of the 2nd season, at about 20 minutes into the episode.

2
This Sorrowful Life car
25
Are the shows Breaking Bad and The Walking Dead in the same universe?
4
Is there enough evidence in the mid-season finale to conclude "Little-Ass-Kicker's" fate?
13
Can a zombie be eaten?
9
Why did Daryl take the cash and jewelry?
5
What was with that scene with Glenn and Daryl?
2
How did Jesus steal the car keys?
37
Is the title 'The Walking Dead' referring to the main characters of the series?
3
Who is the walker that Michonne saw in Season 4 Episode 9?