Is the Marcus Aurelius quote in Black Sails a rewrite?

This is perhaps not the best place for this Q, but I'm not able to find any site more suitable. (Have looked at English Language and Usage, Writers and the like, but doesn't seem to fit.)

Towards the end of Black Sails third episode we are given a read by Miranda from Marcus Aurelius Meditations. With the possibility of not recapturing it correctly it goes something like:

– The emperor writes: How should you be?

You should be like a rocky promontory against which the restless surf continuously pounds. It stands fast while the churning sea is lulled to sleep at its feet.

I hear you say – ``How unlucky that this should happen to me''. But not at all. Perhaps say instead how lucky I am that I am not broken by what has happened, and I am not afraid of what is about to happen. For the same blow might have stricken any one, but not many who would have absorbed it without capitulation and complaint.

Is this from an existing translation / rewrite, or is it a rework by the authors of the TV-series?

[…] Be like the promontory against which the waves continually break, but it stands firm and tames the fury of the water around it. […]

It reminds me of the quotation from Dante's La Vita Nuova read by The Doctor in the Star Trek episode Latent Image in which he reads:

– In that book which is my memory, On the first page of the chapter that is the day when I first met you, Appear the words, 'Here begins a new life'.

Where the more literal translation say:

In that part of the book of my memory, Before which is little that can be read, There is a rubric, saying, 'Incipit Vita Nova'. (Here beginneth the new life.)

Is this the same case? A rework by the script writers, or is it from an existing translation?

It seems to be an actual quote from "The Emperor's Handbook: A New Translation of The Meditations" by C. Scot - and David V. Hicks as you can see at Google Books.

49 > Be like a rocky promontory against which the restless surf continuously pounds; it stands fast while the churning sea is lulled to sleep at its feet. I hear you say, "How unlucky that this should happen to me!" Not at all! Say instead, "How lucky I am that I am not broken by what has happened and am not afraid of what is about to happen. The same blow might have struck any one, but not many would have absorbed it without capitulation and complaint." 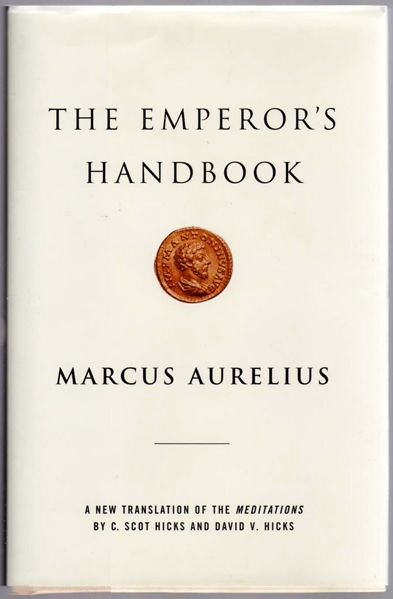 "Be like the rocky headland on which the waves constantly break. It stands firm, and round it the seething waters are laid to rest. 'It is my bad luck that this has happened to me.' No, you should rather say: 'It is my good luck that, although this has happened to me, I can bear it without pain, neither crushed by the present not fearful of the future.' Because such a thing could have happened to any man, but not every man could have borne it without pain. So why see more misfortune in the event than good fortune in your ability to bear it? ... (I'm paraphrasing; more on the deviation of nature (external) should not prevent the man from his own nature (internal), "just, high-minded, self controlled,...") ... So in all future events which might induce sadness remember to call on this principle: 'this is no misfortune, but to bear it true to yourself is good fortune.'

This is the 2006 Penguin Classics version translated by Martin Hammond. So to answer your question here, it appears to be a "rewrite" of an "existing translation". :) Hope that helps.

5
Daniel Day Lewis Quote in Last of the Mohicans
4
Quote about Baltimore Being the Sleaziest city in America?
2
Meaning of the 'magic circle' quote
3
Origin of the quote "mad impetuous boy"
14
Why does the film High Fidelity (2000) call Army Of Darkness "Evil Dead 2"?
4
Explain meaning of this quote in Black Hawk Down
40
Why did Daenerys say this in "The Queen's Justice"?
2
What does Blackadder mean by "we shall be the only fresh thing on the menu"?
1
What does this dialogue mean in The Barefoot Contessa (1954)?