Reality show in secluded house in the woods, contestants are kidnapped, at the end it was all a prank [closed]

Trying to recall of a movie I saw around 2005-2007 (movie date might be around this time as well), one of those "group of young people go to a house in the woods, away from the city". But this one consists of the group being contestants of a big brother-like show, where they would be confined at this house, and they were monitored everytime by a cameraman who followed them everywhere.

I remember the house being pretty modern, with sofas and the walls to be red and purple colored. At the beginning one of the guys (I think the show producer) goes to the woods and disappears, being apparently attacked by something. From this part on, everyone gets scared and one by one they are kidnapped, but they could never see what took them. There is a particular scene I remember when they find out the cameraman is gay and the group uses one of the guys to seduce him and distract him while some of them escape/investigate I think.

At the end, there is only one person who walks out of the house alive and well (can't remember if it's a guy or a girl), and he/she discovers in the end it was all a prank by the producer, who suddenly walks in like nothing happened, and everyone shows up alive later, indicating that the producer "kidnapped them" to add a fear factor on the show. I think the movie wasn't that good anyways, but its ending reminded me of Cry Wolf, and that's why I wanna find it again. Sorry if I lack more details.

I remember that the producer (or at least one of the contestants) had shoulder length black hair, kinda looked like he was indian-ish. There was at least one blonde girl (which horror movie doesn't actually)?

I seem to recollect of a scene where the contestants are eating and drinking on a table (I think it was rounded and white). The scene closely reminds me of a scene from the first season of The Walking Dead, when the characters are dining at the CDC. The surroundings were pretty similar in my mind.

I still could not find this movie, thanks to the popularity of My Little Eye and the related movies being all about serial killers and zombies. IMDb and Tv Tropes were not useful.

Just to emphasize a little more (if that even helps in any way), the strongest points I remember were that: 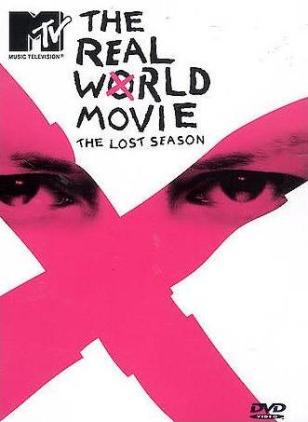 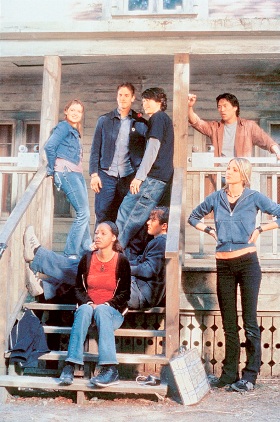 From the blurb on the DVD:

MTV parodies its own successful reality series with this comedic feature film. The cast of a new REAL WORLD season assembles in Vancouver to begin their communal living experience. While en route to participate in a "Real World All-Stars" athletic challenge even with cast members from previous seasons of the show, they are kidnapped by Roland, an obsessed fan. They are then taken to a secret, camera-filled compound and forced to participate in Roland's own, twisted version of THE REAL WORLD.

From a review, here's a description of the cast:

In the fictional film, we meet Liz, the bitchy but beautiful diva; Melinda, the sheltered virgin; Cash, the gay one (though he doesn’t know it yet); Boomer, a Buddhist skater dude; Omara, the uptight African-American; Adam, the obnoxious frat boy; and Keith, the quiet Asian musician.

The fun slowly turns to horror:

Roland wants to be one of the housemates, and since there are always seven, he drags Keith away--and later informs us that he bludgeoned him to death.

Another review describes how the next housemate departs:

Finally, after cast member Boomer is "removed" from the house for hitting Roland (breaking an actual Real World rule), The Real World kids learn to cooperate if they are to find a way out of their reality television nightmare.

Towards the end, some of them manage to escape the house. They enter a forest where they stumble upon the "dead" bodies of two of their missing friends strung up from the branches above. Terrified, they run further through the woods, when they spot a cabin in the distance. As they approach it, they're shocked to find their tormentor Roland standing right at the front door. Watch that scene (and the rest of the movie) here.

This sounds a lot like "My Little Eye" but with a different ending to what you've described http://www.imdb.com/title/tt0280969/?ref_=ttpl_pl_tt http://en.wikipedia.org/wiki/My_Little_Eye so if this isn't the right film, maybe it'll help people link to the correct one.