What role does the song "Hong Kong Garden" play in Marie Antoinette? 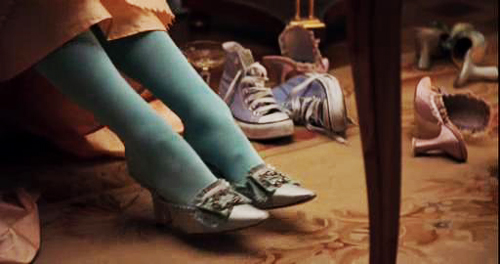 This approach extends to the music as well, with modern songs mixed in with period music. Most of these choices (e.g. "I Want Candy") are fairly self-explanatory. One, however, eludes me:

Why did Coppola choose to use "Hong Kong Garden" so prominently for the ball scene? What is the film communicating through the choice of this particular song — a high-energy post-punk song inspired by racial prejudice — for the scene that it illustrates?

According to this article in ArtandCulture.com, the song's role in the film is to underscore the unique feel of a masked ball:

The song choice manages to clearly convey the unique nature of the masked ball; this is no oppressive mignonette. The dancing in this scene is all about grabbing, whirling, and drunken flirtations. It is decidedly ruffled and translates the space into one of transgression, where Marie might finally flirt and enjoy the company of men other than Louis XVI.

"Hong Kong Garden" was chosen to commemorate its use by Sophia Coppola as a "wake-up tune" for the staff and crew. Coppola is apparently a big fan of punk and would regularly blast the Siouxsie and the Banshees, Adam Ant, Bow Wow Wow and other rock songs over the tannoy at breakfast. They enjoyed them so much that many of the songs were later added to the film.

Sophia Coppola used 'Hong Kong Garden' as the "wake-up tune" for her cast and crew. [Kirsten] Dunst says, "Sometimes we would play music and that would evoke different feelings. It was great because when you're shooting at eight in the morning, when you just got done with tons of hair and make-up and wardrobe, and everyone's a little tired, the energy from music like that really helps."

Not the answer you're looking for? Browse other questions tagged analysis soundtrack marie-antoinette .