Why do some movies include only one instance of the f word?

While rewatching Mr and Mrs Smith, there is only one instance where the f-word is used. There are several other movies (I can't recall any other at the moment) where f-word is used only once. Is there a reason for this?

In order for a film to get a 12A or PG-13 rating, it cannot contain gratuitous use of profanity:

One 'Fuck' is allowed, anymore and it automatically becomes a 15 or R rated.

That article features a very humorous piece of meta-textuality, referring to the Movie Be Cool, in which budding film producer Chili Palma states:

“Do you know that unless you're willing to use the R rating, you can only say the 'F' word once? You know what I say? Fuck that. I'm done."

For the rest of the film, several characters come close to using the word "fuck" but are cut off or censored in some way before they can.

Othes that hold back the F-Bombs for certification purposes include:

Recently there has been room for discretion, as the MPAA has stated that:

if two-thirds of the ratings board members believe that multiple F-words are used in a legitimate 'context or manner' or are 'inconspicuous,' then the movie could still be rated PG-13.

However, the biggest gripe the MPAA/BBFC/Other variants have is the use of the word Fuck in a sexual context, or as a verb: as in "I'm going to fuck you". Even hint at this, and its... 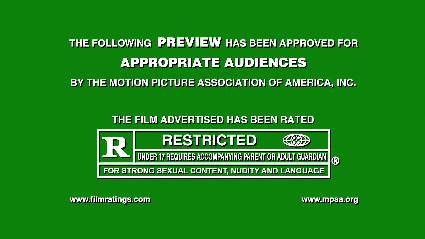 and so the following films use more than one 'Fuck' but still received a PG-13:

There is clearly more and more room for discretion, but I guess it's not really worth the risk/re-edit for some people...

Not the answer you're looking for? Browse other questions tagged dialogue content-rating .

22
Was it necessary to bleep out Johanna Mason's curses?
4
How did The Right Stuff get a PG rating with so many uses of the f-word?

1
Why do some movies contain scenes in different languages?
1
“I promise, Tiger”. Why is he addressing him like that, what's the origin?
9
What is the term used to refer to foreign/alien language only subtitles in a film or TV show?
10
Why does Mr. Bumble call the law a bachelor in Oliver?
2
Does Tom Sawyer (1938) contain the n-word?
14
Why was seventeen chosen to be the age allowed to see an R-rated movie instead of sixteen or eighteen?
9
Why did they begin using *fuck* in Season 7 (2017)?