What can someone use to give them 'Godfather cheeks'?

You know the story. Someone tells you the great news that they're expecting, and the even better news that they want you to be the Godfather. Your natural response is to look the part. 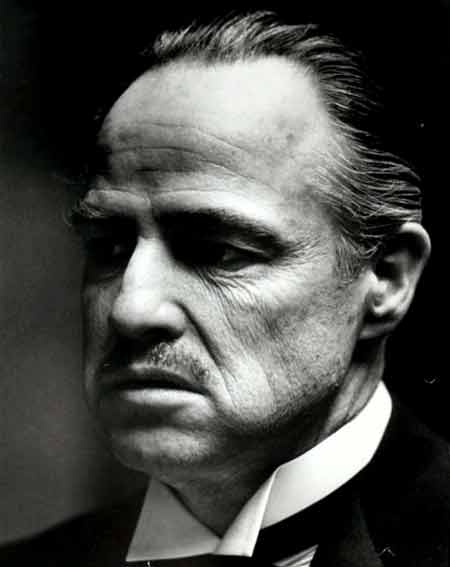 But how? cotton balls seem too soft, moth balls are probably not the best thing to use. Marbles? How would they stay put while you talk?

Marlon Brando used cottonballs so I'd suggest that they're not too soft. I think it was shown in Hearts of Darkness and mentioned on The Godfather commentary which are hard to link to for obvious reasons.

From The Godfather wikia:

Brando's performance as Vito Corleone in 1972's The Godfather was a mid-career turning point. Director Francis Ford Coppola convinced Brando to submit to a "make-up" test, in which Brando did his own makeup (he used cotton balls to simulate the puffed-cheek look).

I've personally tried it, and it takes some getting used to, but with a little practice you can get the cotton to stay in place. Brando's slow, methodical drawl may be because he was working with this handicap. Perhaps cotton balls deserve an honorary Oscar®.

It is also confirmed on the Wikipedia page for Brando.

Jaffe eventually set three conditions for the casting of Brando: That he would have to take a fee far below what he typically received; he'd have to agree to accept financial responsibility for any production delays his behavior cost; and he had to submit to a screen test. In order to skirt the humiliation of having Brando submit to a screen test, Coppola convinced Brando to a videotaped "make-up" test, in which Brando did his own makeup (he used cotton balls to simulate the puffed-cheek look). Coppola had feared Brando might be too young to play the Don but was electrified by the actor's characterization as the head of a crime family. Even so, he had to fight the studio in order to cast the temperamental actor. Brando had doubts himself, stating in his autobiography, "I had never played an Italian before, and I didn't think I could do it successfully." Eventually, Charles Bluhdorn, the president of Paramount parent Gulf+Western, was won over to letting Brando have the role; when he saw the screen test, he asked in amazement, "What are we watching? Who is this old guinea?"

Not the answer you're looking for? Browse other questions tagged character props .

14
What kind of blood do they use in movies for bloody scenes?
4
What do they use in place of actual marijuana plants?
8
How can Professor X walk and use his powers?
5
Did Hannah Wells' have a 'story'?
0
What type of character is Cheryl Blossom
33
What kind of gun did Robocop use in the first movie?