In the Spider-Man films of the last 20 years how do Spider-Man's feet stick to walls?

In the Spider-Man films with Tobey Maguire they showed close-ups of Peter's hands with the little jagged spikes growing out of his skin, showing that this is how he sticks to surfaces. But how would that apply to his feet? The spikes are not long enough or probably strong enough to burst through his boots. 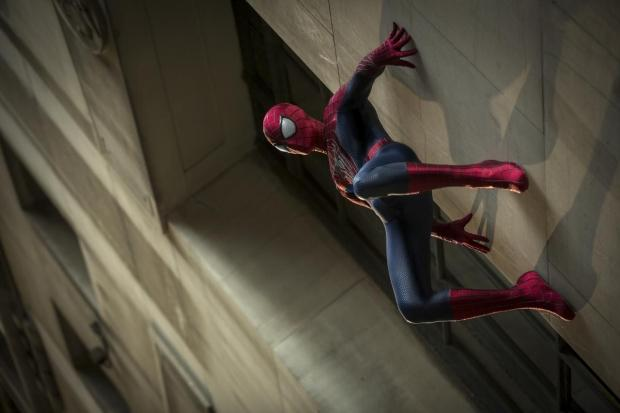 From Wikipedia entry of Spider-man's power -

The ability works through thin layers of cloth, such as the fabric of his costume, but not through materials such as the soles of shoes. When Peter Parker needs to crawl without changing into the costume, he removes his shoes first.

Spider-Man's wall-crawling ability has increased with time, most notably in a backup story in Amazing Spider-Man #365 by Tom DeFalco, in which Peter explains his abilities to Mary Jane. Peter reveals that every part of his body has gained or increased in attraction to other surfaces, and he can stick people or objects on his back. Over time he realizes he could keep his mask firmly fixed to his face (previously used to prevent undesirable mask removal), protecting his secret identity.

The Spider-Man entry in the Official Handbook of the Marvel Universe states that Spider-Man is able to enhance the flux of inter-atomic attractive forces on surfaces he touches, increasing the coefficient of friction between that surface and himself.

Electro had a revelation during a battle about Spider-Man's clinging ability and can disrupt this power somehow, claiming that it was based on some sort of electromagnetic bonding. It is ineffective after the events of "The Other".

So it can be concluded that they used Spider-Man's wall-crawling in the comics first and then they tried to explain it time by time. Same with the movies too.

Note: Answer is from the comic universe because movie don't have any elaborated answer for this.

Specifically in the films, Parker grows a hooked chitin from his fingers. Assuming he cannot do the same with his feet, he needs only to apply compressive stresses (think arches) to transfer the weight to his hands. So his feet would supply minimal support where his upper body would compensate for every movement.

A panel of biologists and physicists on the History Channel’s Spider-Man Tech suggested the barbed-hair on his fingertips (from the movie) could have the same effect as the miniature scopulae hairs on the ends of a spider’s feet. Spiders are able to climb up seemingly impossible surfaces like glass because the scopulae interact with the glass’s atoms causing a form of atomic static cling via the Van der Waals force

there is a possibility that this Van der Waals force may pass through his clothes thus not requiring the micro thorn structures to pass through the gloves.

Van der Waals force is nothing is the sum of the attractive or repulsive forces between molecules (or between parts of the same molecule) other than those due to covalent bonds, the hydrogen bonds, or the electrostatic interaction of ions with one another or with neutral molecules or charged molecules as given in wikipedia

which indicates the presence of dipole.So what electro essentially does that is change the charge (he essentially neutralizes the dipole induced by spidermans fingers ) using his powers. as given here

Note: the full answer is given in this link here