Is the mystery of Howard's father's letter solved?

In "The Big Bang Theory" episode "The Closet Reconfiguration" (S06E19), the gang gets Sheldon to tell them the contents of a letter he found in Howard's closet from his father. Later, they give Howard various theories on what it contained and he declines from knowing which one was actually true. Of all the options, Bernadette describes a picture of his father holding Howard on the day he was born and on the back was written: Howard my son, my greatest gift.

In an episode in the next season: "The Thanksgiving Decoupling" (S07E09), in a scene set in Howard's house, there is a picture of a man holding a baby in the background (in the stairwell; at around 04:52 into the episode). Could this be the contents of the letter? Making Bernadette's theory the correct one? This would include the assumption that someone removed the contents from the envelope as Howard lights it up and then throws it into the sink. Or that they managed to salvage it before it was completely destroyed. 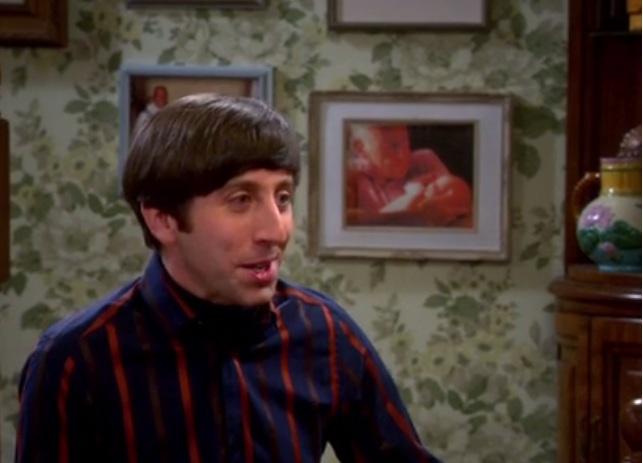 Later in the "Closet" episode, Howard is seen looking through pictures of him (one with cornrows) and his father under the label "Photos of Wolowitz family before father left forever."

It is plausible that there was a picture included with the letter and Sheldon chose to organize the picture and letter separately.

Regardless of that possibility, the episode was specifically about the contents remaining in the envelope and the understanding that each cast member's (minus Sheldon's) explanation was showing regret from the father for leaving and pride in who Howard has become.

As for the photo, it appears to be a grandfather holding a child.

In Season 8, it shows Howard's half-brother come to his house; so that could be proof that Penny was telling the truth about the letter in Bernadette's closet.

I think that the picture is most likely Bernadette's baby picture with her father rather than Howard's. I mean why would Howard want to have that picture on his walls considering he has his father issues. To be honest though the contents in Howard's letter is most likely either Leonard's (most realistic one) or Bernadette's because her's is the second most realistic one and that she is Howard's wife(thus it is only logical that she should have the honour to tell him the truth). However, I do begin to like this idea of all of them telling the truth (excluding Sheldon)

I think it was all of them apart from sheldons obviously. Makes sense they would allow him to hear everything that was in it by him telling himself he doesn't know. As his best friends I think this is something that they would do.

I think i may be either Bernadette's or Amy's. It could be Bernadette's cuz she's the wife and it seems likely that the group discussed who would get to be the one to tell the truth. It could be Amy's because (in my opinion) it seems like the sweetest and most heartfelt. So maybe the group made sure that what everyone else said wasn't better than the real one to avoid disappointment, is Howard wanted to know the truth. Also, it seems to me that everyone's answer was quite similar to each of their personality. Raj's simple and slightly humorous card, Sheldon's stray from the point, Amy's severely heartfelt revelation she long's for herself, Penny's movie-like plot she may have chosen as she is a movie person, Leonard's true relation to his feelings of his own family and Bernadette's seemed the most apart from her personality unlike the rest and possibly the one.

Its penny's story line that's true in my head. Howard's dad was like a psi or something. Think about it. Howard tries for FBI clearance. He picks locks. Steals million dollar cameras, security systems, etc. Apple doesn't fall far from the tree.

I give Bernie the nod,she is the wife and that would weigh heavily in her favor to get to tell the truth. I like the theory that aside from Sheldon they where all telling the story.

13
What is the IQ of Raj?
16
Why does Bernadette work at the Cheesecake Factory?
8
How precisely do we know the research topics of the scientists in TBBT?
3
What's the meaning behind Howard's alien pin?
8
Who was Penny mentioning in S02E04 “The Griffin Equivalency”?
30
How did the word “Bazinga” originate?
5
How was Sheldon able to play around with Rajesh and Howard
2
First Big Bang Theory episode with none of the guys in pre-credit sequence
31
How do TV shows go about getting “unbranded” cars?
8
Do the atomic model animations between scenes have any meaning in The Big Bang Theory?