In the first season of the Big Bang Theory, the equations on Sheldon's whiteboard change over time and in each episode there's a different equation; so they put someone in charge to show that there's actually a progress in that board.

But it's a real progress research or those equations reflect something already solid or demonstrated?

Here's a photo with Sheldon, Penny and the whiteboard in the background: 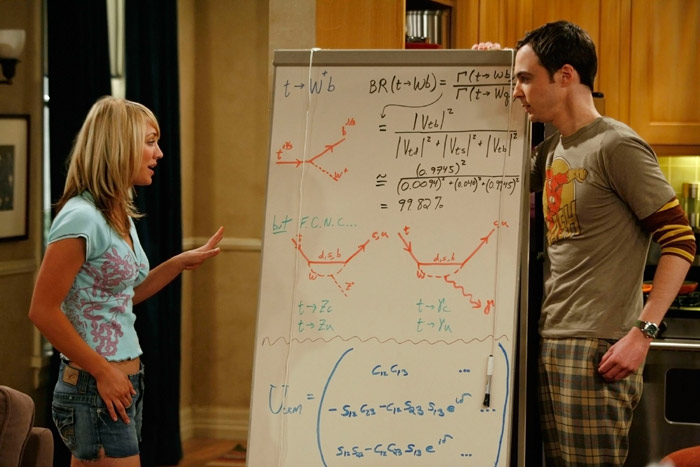 As a mere viewer of The Big Bang Theory, I can't answer this question with certainty, but as a physicist, I can offer a couple observations:

So in summary, I'd say almost certainly no, the equations do not in general reflect current progress in research (though the latest couple blog entries on the show's blog suggest that they're trying this). But they are at a much higher level than most other instances of math in movies and TV, and they are actual scientific equations, so you have to give the show credit for that.

The person you write about, the consultant, UCLA Professor David Saltzberg, has a blog that explains the mathematics of the show episodes. Giving a quick glance, it appears there is an entry for each episode that explains the scientific theme(s) brought up during the show. None of the few I read say anything about progression of the math through a series of episodes. They all seem to be standalone; I can't discern a continuity.

In the bonus material of season 1 or 2, there is this item about the scientist who provides these equations and the material for it. I remember he said that the problems that are written down, are recent problems that are brought up/solved in recent papers in the respective fields of Sheldon/Leonard/Raj.

Ok, I have no sources right here right now, but I remember that in first season it was some kind of "progression" on his work... or, more than progression a "connection". But don't take this show too serious, specially not after season 2, a lot of things are just a random mix of disconnected thoeries, hypothesis, etc.

9
Is the science in The Big Bang Theory correct?

10
How precisely do we know the research topics of the scientists in TBBT?
13
Why do Penny and Sheldon's mom sing "Soft Kitty, Warm Kitty" differently?
2
First Big Bang Theory episode with none of the guys in pre-credit sequence