In The Child's Eye (2010), the girl throws the book she was reading out of the van's window. What is that book? Why does she do that? After doing this, they have an accident. Can anyone explain what exactly happens at the end of this film?

I admit it's not a perfect answer, but since nobody else bothered, I'll give it a shot. The simple answer is that the ending is ambiguous. We don't see what Hei is pointing at or what happens after the film cuts to black, only hear a car crash. But here's the best theory I can come up with.

In the beginning, Rainie says that according to her mystical book, a pregnant woman can't kill, otherwise she and her baby will be cursed. Near the end, we find out that the hotel owner's wife was cursed and that her babies became human-dog hybrids because she killed the dogs. When the wife's ghost feels that Rainie is pregnant as well, she lets her go and is able to finally find peace.

But in the twist ending, Rainie, thinking she no longer needs the book and throwing it out the window, causes the car behind them to crash. I assume this since there's nothing in front of the group's vehicle before this happens, just an empty road, so there's no reason for them to crash: 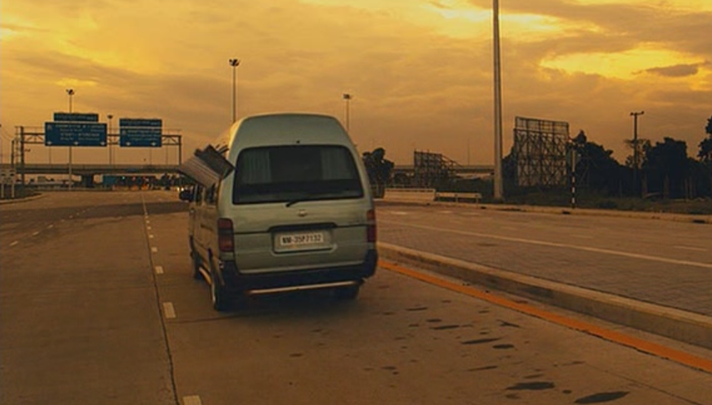 It makes more sense that the book obscures the windshield of the vehicle after them (a feeling magnified by the 3d effect; we see the book flying right at us, as if we're driving behind them). And Hei, who sensed the ghosts back at the hotel, is now pointing at Rainie because he's sensing that the curse will live on: Rainie is pregnant and is just about to cause a death.

(And although the connection to the Pangs' Eye trilogy is tenuous at best, there are tiny links that might give some credence to this theory. The Eye ends when a character senses that an accident on the road is going to claim many lives. The Eye 2 introduces karma and a cursed pregnancy. And The Eye 10 introduces a mystical ghost book.)

Not the answer you're looking for? Browse other questions tagged ending the-childs-eye .