Why did Magnussen need to pressure so many people to get to Mycroft?

In the last episode season 3 of Sherlock, The Last Vow, Magnussen seems to use a very circuitous approach to beating Mycroft, whom he regards as essentially the head of England.

My question is, if Magnussen already had "pages" worth of pressure points applicable to Sherlock (evidenced by the rapid scrolling visual on his glasses), did he have to include so many other people--or is it explicable merely with "arrogance"?

By involving so many people Magnussen is able to build a chain of accountability.

If he were to manipulate a single person, they could (out of a sense of desperation or nobility) sacrifice themselves in order to foil him. By involving a series of people linked to each other, none will jeopardize the position of their own 'weak-point', creating a fail-safe against any action against him.

By creating such a chain, he is making the ramifications of Mycroft's/Sherlock's/Watson's/Mary's potential intransigence affect people beyond their immediate vicinity, and possibly beyond their comprehension, which is very intimidating.

It appears as though Magnussen gets some kind of satisfaction from creating these needlessly convoluted chains, as they are a demonstration of his power and the far reaching boundaries of his control. This is perhaps the arrogance you speak of.

Magnussen has many pressure points on Sherlock, but few that have much leverage on him.

In fact Sherlock doesn't seem that concerned with his public image and is happy for drug taking and sex stories to appear in the press. This means that few of his foibles can be used to pressure him in any way (unlike revelations about a leading politician, for example).

But Magnussen knew from the bonfire incident in the previous episode just how far Sherlock would go on behalf of Watson (he may have had other evidence pointing to this fact and set up the bonfire incident as a definitive proof). So Sherlock's desire to protect Watson creates leverage. But what is the best way to gain leverage over Watson? His weak point is Mary. And Magnussen knows all about her already, so he can use that to get the results he wants.

My question is, if Magnussen already had "pages" worth of pressure points applicable to Sherlock (evidenced by the rapid scrolling visual on his glasses), did he have to include so many other people--or is it explicable merely with "arrogance"?

I don't think he had really had that many pressure points on Sherlock.

Lets revisit what Magnussen lists in his mind: 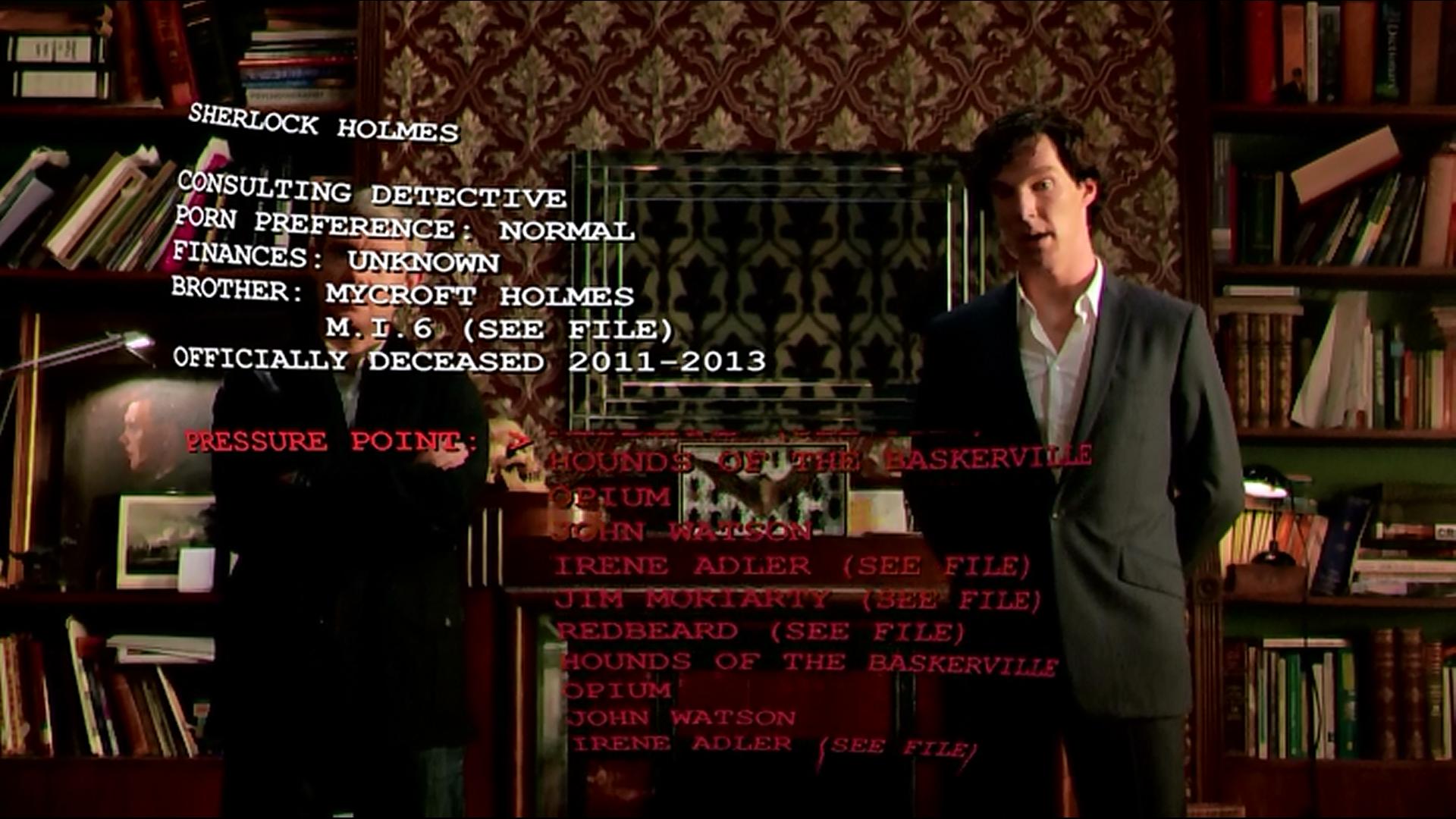 There are only six points being listed here (and infinitely scrolled, likely for effect, to indicate that there are more than usual):

Irene Adler and Moriarty are (supposedly) dead, so unless he knows about them being alive, using them will be hard.

From Sherlock's mindpalace sequence we know that Redbeard was his dog as a kid. He got put down, so also not really a good leverage.

Magnussen says later that he did not buy the Opium/drug story from the start, so that is off as well.

I really don't know what the "Hounds of the Baskerville" pressure point is supposed to be.

So that leaves John Watson as the easiest and most likely way to blackmail Sherlock. As others have stated, he tested this earlier by getting Watson into danger and checking how far Sherlock would go for him.

16
Why does Magnussen list "Hounds of the Baskerville" as a pressure point on Sherlock?
13
Does Magnussen have no electronic assistance to remember the facts he needs for blackmail?

14
Why does Mycroft meet John in so many different locations?
7
How is it possible that Magnussen can blackmail so many people without actual evidence?
16
Why does Magnussen list "Hounds of the Baskerville" as a pressure point on Sherlock?
7
Why did Sherlock choose this solution for Magnussen?
5
Why did Mycroft give Sherlock's information to Jim Moriarity?
4
Why does Mycroft say this in that time period?
17
Why did Mycroft and Sherlock disguise themselves to meet Eurus?
3
Why didn't Mycroft speak the truth in "The Final Problem"?
6
Why is Mycroft unable to solve The Final Problem
3
How did Magnussen know about Redbeard?