How did they film Patsey being whipped?

A Sequence in 12 Years A Slave shows Patsey, a plantation worker, being tied to a pole and whipped. 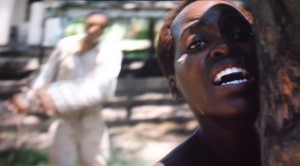 The shot is horrifying, and shows her flesh being torn and rendered open by the whip as it makes contact, cleaving chunks of flesh away.

Obviously they didn't actually whip Lupita Nyong'o, and from this interview we can determine that no actual contact was made with her body during the scene:

It’s all about the crack of the whip. You hear it. And you feel it. I felt the wind of it every single time. I didn’t need much more. That was one technical thing, and definitely it took some finessing because obviously I can’t see what’s happening. I can’t see the whip. I can only react to the sound and the wind of it, yeah? So it was hard, but that day was as real as it could have possibly been for me, because in preparing for it, all I could do was be present.

It's unlikely the shots were achieved by CGI, unless it's literally the best CGI ever used in cinema and Steve McQueen is incredibly humble about what he's achieved (those of you who have seen the movie will no doubt vouch for this, it's incredible).

But I can't understand how they could have been achieved practically without physically touching the actress, which she has stated didn't happen.

Another interviewer was, like me, utterly incredulous as to how this scene was shot and asked Nyong'o herself, but she only replied:

It feels, as the viewer, like it would've taken longer to achieve -- not only because it's one continuous shot, but because it's so emotionally heavy. Were those practical effects or CGI effects employed?

Does anyone with any practical experience of S/FX understand how they could have filmed this? Does anyone actually know how this was achieved?

(Not saying this is how it was really done - my background is in stage, not screen).

There are three effects going on there - the spray of blood from the whip, the (very brief) scene where you see the whip striking the actresses back, and the closeup of the wounds afterward.

All the above is a LOT easier to do on a black performer, especially with one as dark as Lupita Nyong'o. Because of the lower reflected light, lower contrast, the seams in the makeup just disappear.

Complements to the sound effect crew for avoiding the whip-crack cliche. Whips don't make the crack sound when they strike something.

We were such pleasant people back then.

BuzzFeed has an article that describes the process as a mix of practical effects and CGI.

Logistically, it was a matter of some old-school camera trickery — the whip never came close to Nyong'o's back, but it looked like it did thanks to the camera angles director Steve McQueen chose for the scene, and Nyong'o moving her body as if she was being whipped. And when the camera swings around to capture the ruin inflicted upon Patsey's back, the effect is a combination of practical make-up and CGI.

As for the actual mechanics of what practical effects they used... unknown. Hopefully there's an industry professional somewhere around here.

Not the answer you're looking for? Browse other questions tagged effects make-up 12-years-a-slave .

8
What is the difference between USD 38M and USD 120M CGI?
14
How are the face-in-suit segments of Iron Man filmed?
8
How are Michonnes Zombies made?
3
Basis of the CGI model of SS Botany Bay in ST:TOS "Space Seed" re-release
14
Is there any CGI used in Dunkirk?
0
How did they film the special forces helicopter crashes?
9
How do they create the side-impact-crash "from inside the car" shots?
7
How Was The Superimposed Billboard Effect Achieved In Michael Jackson's Billie Jean Music Video?