Did Johnny and Lisa get married?

In The Room, the chronology is difficult to follow.

Do Johnny and Lisa get married at some point in the Movie?

At first, Claudette mentions that Lisa is getting married next month, and that Johnny's party is 'Next Friday', so (given the party takes place at the end of the film), it would appear as though that couldn't possibly have happened.

However, this is The Room we're talking about.... 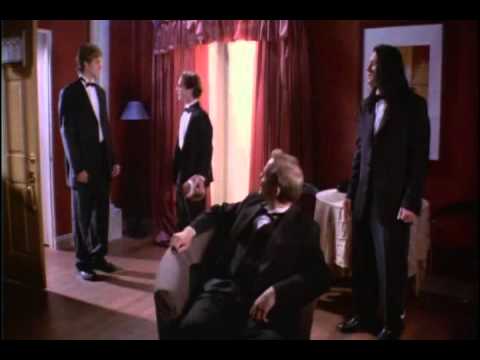 One sequence contains all the men of the group wearing tuxedos, at which Denny informs Johnny his wedding photos are going to look great. It could be an impromptu dress rehearsal, but it seems heavily implied this is the morning of Johnny's wedding.

Later, Mark confesses to Peter that he is having an affair with another man's wife, and at the party Johnny also refers to Lisa directly as his wife.

We know from The Disaster Artist, Greg Sestero's production journal of the movie, that continuity and logical sequencing were entirely disregarded by Tommy Wiseau, which makes some sense of why the jumbled sequences made it into the film, perhaps?

Does anyone have a reliable chronology for the events of the film? Did Johnny and Lisa actually get married?

First off, having "plot-explanation" and "the-room" tags next to each other is hilarious.

Anyway, I rewatched it and found no evidence of their marriage other than your observations. The party is Johnny's birthday party and referring to her as his wife is as likely a mistake as glossing over the whole wedding would be. Mark confessing about a "wife" might be a ruse to lessen suspicion.

At first, Claudette mentions that Lisa is getting married next month, and that Johnny's party is 'Next Friday', so (given the party takes place at the end of the film), it would appear as though that couldn't possibly have happened.

That seems to be the only likely answer in an illogical, convoluted mess like this. Keep in mind things like breast cancer are mentioned and then quickly forgotten after being told "don't worry about it." (Remember the drug "subplot" that lasted one scene?)

I'm sure you want a better answer, but there doesn't seem to be one. Having just watched it again I can only paraphrase Chinatown, "Forget about it John, it's The Room."

First of all, I don't agree so much with the fact that the chronology is difficult to follow. After all The Room seems to be pretty linear in the way the story unfolds. Disregarding the slight unconnectedness of some individual incidents, if the movie doesn't suggest otherwise, I have no reason to believe the chronology to be non-linear in any way. Thus my chronology of the events would be the same as presented in the movie (even if that might not be ragarded as "reliable").

I agree though, that I also couldn't completely bring this tuxedo scene in relation to the rest of the narration. But it also seems quite impossible that this could in any way happen after the birthday party, as that is when everything collides, especially Johnny's relationships with Mark and Lisa. Additionally, it is clear that he was not married to Lisa during the birthday party (and thus before his death), since at this party he still calls her his "future wife". Thus from the movie itself I can only conclude with a very definite

No, Johnny didn't get married to Lisa.

But in contrast to Meat Trademark's answer I wouldn't attribute anyone using the word "wife" to be just a mistake or a plot oversight. Rather than that they were just using the term "wife" colloquially, in anticipation of Lisa being Johnny's wife in the near future anyway. This is similar to Lisa's mother calling Johnny her (Lisa's) "husband" earlier, only to be corrected by Lisa. This inaccurate use of the terms "wife" and "husband" adds to the fact that apart from Lisa everybody else seems to see her marriage as more or less predetermined and that Lisa's unwillingness to accept that and her anticipation of the boredom of being a "wife" is in fact the major motivation for her devastating actions. In addition to that Mark might also have said "wife" to make the explanation easier and not disclose everything to Peter.

Not the answer you're looking for? Browse other questions tagged plot-explanation the-room .

5
Are the plots of future Sherlock episodes going to be much more by Steven Moffat than Sir Arthur Doyle?

1
Was the Bride previously married to Bill?
3
Why don't Jeff and Stella rush in to save Lisa?
2
Why did the chinese murderess not kill Johnny in the golf camp?
4
Why did the Blair Witch need James and Lisa to look at it?
8
Why did Johnny Cage leave his "friendship" offering after his fight with Scorpion?
5
What did the Corleone family gain from doing favors for Johnny Fontane?
5
Where exactly did Wakanda get the Vibranium and how did they get this high-tech?
9
Why did Summer get married?
7
Why does Johnny say he’s responsible?
2
Does Raj Koothrappali ever get married?