Did Brazil carry a disclaimer about its uncomfortably loud volume?

My father claims that Brazil was shown in theaters with uncomfortably high volume, and carried a disclaimer to that effect. I can find no claim of this online, including in reviews from the original release of the film.

Do any movies include such a warning? I've heard that Terence Malick's work carries a similar disclaimer in home editions, but my father's claim was strictly about seeing Brazil in theaters.

Film-makers often forward instructions as to the appropriate volume of the film via distribution companies: although often these are ignored entirely by the exhibitors, and can sometimes be received as overly pedantic and just a little condescending.

The size (and sometimes positioning of speakers) of an auditorium will have an effect on the overall volume; so a film-maker trying to standardize across all cinemas will often be ignored or sew the seeds of their own downfall. It's sad that they're ignored, but true, and largely necessary.

Recent examples of this include Ken Loach's Jimmy's Hall and Jonathan Glazer's Under the Skin, which both sent out DCP's including volume instruction. It's a fairly common occurrence within cinema exhibition to receive these requests.

Brazil is a widely recalled example of this, and is often recalled as the strongest anecdote of "Ignore sound requests" by projectionists who were active at the time of its release.

The Battle of Brazil tells of Gilliam's ongoing battles with Sidney Sheinberg (then Producer at Universal, and discoverer of Spielberg) which descended into one of the funniest and most petulant battles for control in the business.

This was a famous advertisement Gilliam put out in Variety... 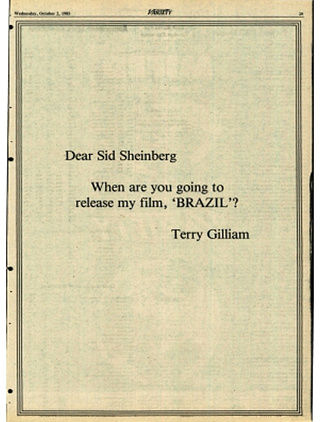 Different sources claim it was either Gilliam's request the sound be played inordinately loud for impact, or Sheinberg wanted to sink it before it grew legs. The former is much more likely, but the truth will probably be lost forever.

Regardless, your father was correct and among certain projectionists, "Brazil" has become a byword for this type of incident.

Not the answer you're looking for? Browse other questions tagged sound-effects brazil .

24
What did they use to make the Jetsons flying car sound effects?