Does River Song's message on Planet One in "The Pandorica Opens" have any perceived meaning?

In Doctor Who ("The Pandorica Opens" S05E12), River Song is the person responsible for leaving a message on "Planet One" carved into the Diamond Cliff. 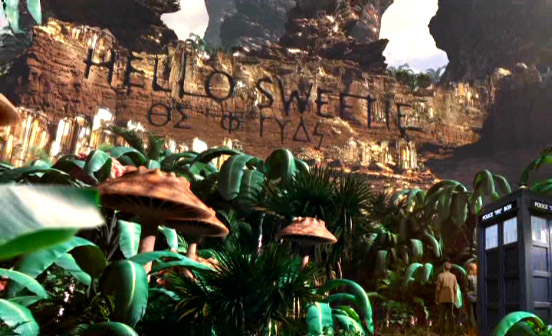 Now, the "Hello Sweetie" is the obvious running greeting for River to The Doctor, and Long time fans know that "Theta Sigma" (ΘΣ) is a possible alias or name for The Doctor.

The remaining section is the part that I'm curious about;

With tones of science fiction programmes putting in codes for the audience to solve, does this last section have any perceived meaning?

For a possible explanation you'll have to consider the following:

It's possible to interpret the second line as Greek numerals:

This doesn't sound that far off thinking about it - in fact it's my favorite theory right now. The information "on Earth" doesn't necessarily have to be included - neither does "to the Doctor", considering it's more or less River's home planet and it's clearly written by River. So with more specific details missing, it should be obvious she's talking about Earth.

The first two groups (ΘΣ Φ) could represent a coordinate pair to identify a specific point on the surface of the Earth and the last group (ΓΥΔϟ) would mark a specific point in time. Once again, there'd be an offset given by the fact the message is from River.

Since I completely missed the clickable link regarding the Theta-Sigma reference, I skipped that. So here's an alternative interpretation with one more tiny assumption:

Although this still doesn't explain why the numbers don't show up using arabic numbers or anything more easily perceivable. Maybe the TARDIS isn't able to get the proper meaning (i.e. it doesn't know whether this is supposed to be words or numbers) or it's part of River's plan to hide the message right in the face of the whole universe to only be seen (and understood) by the Doctor.

The ' symbol just after Theta-Sigma is the key to all the message. The Doctor knows he is being talked to directly. It is short for περισπωμένη.

11
Does "...you're a cantaloupe" have any meaning?
7
In "Mystic River" how come no one mentioned the second murder?
1
Does Jack Welker's hairstyle convey any meaning?
3
What does Rory say to the Roman soldier in the Pandorica Opens episode of Doctor Who?
3
Does the cats' anthropomorphization have any implications for our human reality?
8
Does Doctor Who have an end game to the overall story of the season?
17
Does Professor X have any responsibility for the state of the world?
2
How many regenerations does The Master have?