Does Captain America possess superhuman strength in the MCU?

Ask Question
Asked 7 years, 6 months ago
Active 5 years ago
Viewed 19k times
14
Want to improve this post? Provide detailed answers to this question, including citations and an explanation of why your answer is correct. Answers without enough detail may be edited or deleted. 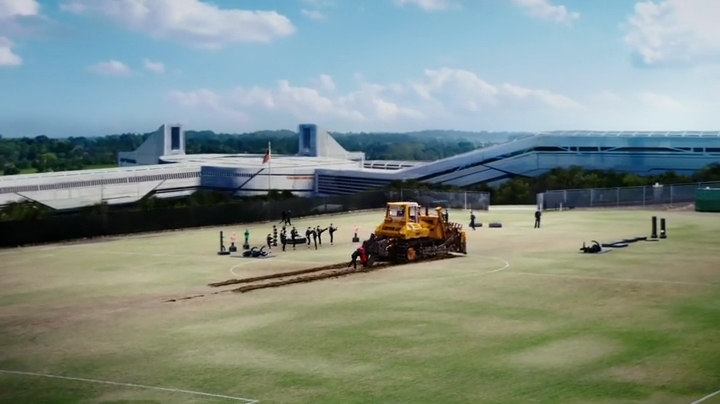 In the episode The Bridge (Marvel's Agents of S.H.I.E.L.D.) superhuman Mike Peterson pushes a bulldozer across a football field.

Afterwards Mike and his trainer exchange these words:

Trainer:   Not even close.

But according to the Marvel Wiki Captain America's strength is:

enhanced to the very peak of human potential.

As a result, he is as physically strong as a human being can be without being classified as superhuman.

The simple answer is YES. Very easily this is proven in The Avengers, while on board the flying boat, Captain goes in search of evidence of SHIELD's misuse of the Teseract and finds a closed door. At this instance, we see (or rather hear) Captain open the door forcibly using only arm strength to do so. This is only one such proof of super human strength in Captain America. This scene is just before Hawk lands on the ship and Banner becomes the Hulk.

The Production Notes from Captain America: The First Avenger contain this quote from director Joe Johnston:

He doesn‘t have any super powers per se— his powers are basically what the human body can do, but taken to a level of physical perfection. I have to say, that‘s what appealed to me about the character and about doing a film.

As he suggests, no special powers, but this is as good as it gets.

The single greatest feat of strength seen by Steve Rogers in the MCU movies was in Age of Ultron. In the siege of the Hydra base, Cap is seen flipping his motorcycle (a 2012 Harley-Davidson Softail Slim or a Harley-Davidson Street 750) over his head, into a Military grade Humvee. Dry standing weight of these bikes are in the 600+ lbs range. That's not including any upgrades or armor added.

Not only does he flip it while at high speed, he stops the Humvee in its tracks. And he completely negates all forward momentum of himself, ignoring inertia.

The record for human weightlifting is ~400 lbs snatch, i.e. a clean lift above the head. Cap did it without any signs of exerting himself. This puts him into superhuman range, clearly not peak human. Steve's Strength, stamina, speed, and athletic/gymnastic skill would allow him to easily break every single Olympic or Guiness record by a large margin.

In Civil War, we see Cap single handedly hold a helicopter in the air.

Based on a comment by TylerH on similar question:

The helicopter in the movie generates about 2000hp, or 1491.4 Kilowatts. As shown in quora.com/How-much-energy-can-a-human-produce and en.wikipedia.org/wiki/Human_power, as well as worldbuilding.stackexchange.com/questions/32336/…, a healthy human (on average) 1.2 horsepower for a short time, whereas a trained athlete can generate twice that. Considering Cap is capable of holding that helicopter indefinitely, and thus generating at least 2000 horsepower... He is being shown as able to generate ~1666x as much power as the average human. That by very definition of the word is superhuman ability.

Rogers ability to stop a helicopter for a significant amount of time is just inhuman. 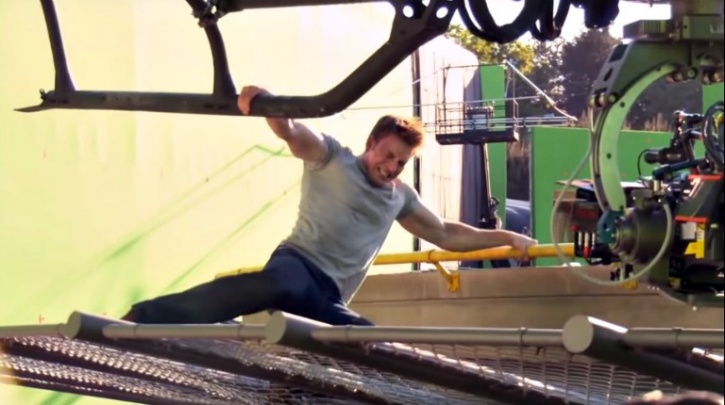 Steve is most definitely superhuman. Flipping the motorcycle is one, but in the first cap movie hes holding a motorcycle with 3 women on it over his head, catching up to a submarine under water, punching the glass out and throwing the man up onto the pier a good 8-10 feet up while in water well over his head... The fall at the triskelion, taking direct shots from both Tony and Ultron in age of ultron, holding the car off the bridge before the bumper snaps off, ripping ultrons robots apart with his bare hands, as well as before he throws his motorcycle as hes riding he grabs a man with one arm, drags him and throws him into another... In Winter soldier when hes running an kicks the man on the lumerian star, the man goes sliding a good 20 feet into a metal tube which dents from the force, he also kicks a man off the boat.

The winter soldier (bucky barnes) also displayed such feats by kicking a man into a jet engine a good ten feet up, and being able to rip a car door off with ease with his robotic arm, as well as punching through a windshield and ripping a steering wheel off, Then being flung from a car at high speeds and getting up like nothing happened. And being able to sprint nearly as fast as cap. He also jumped off the bridge that cap got sent off of and landed on a car, which crunched the roof. That was a good 30 foot drop...

*These observations are all based off of the cinematic universe

In the comics bucky aka the winter soldier flung the punisher (frank) over his head with just his human arm, frank isnt a small guy either.

These things are made up according to the plot requirements and just a loose hierarchy. Such as, Captain America can't just stand still while being shot by pistols or stop a train, like the Hulk or Super-man would, but, if the plot requires, he would be able to knock out the Hulk, even if cheating somewhat, like throwing the shield after a dash in a dramatic slow motion to emphasize effort, or throwing a big safe over his head from the top of a building while he's not looking, whatever. A non-"super" human would have to do something more extreme to achieve the same effect, and wouldn't be able to lift and throw down with force a big safe, for example, instead a more normal human, even with impressive strenght would have to do something like hit Hulk with a full-speed truck with a heavy load or something.

There is no absolute consistency in this sort of thing, be in comics or in movies, they just do the best to keep just a loose consistency while they stretch it quite a bit in order to make some scenes cooler or just "possible". But it won't stand careful scrutiny, it's like on episode A32F7 of itchy and scratchy, when scratchy hit twice the same xylophone piece, but it played two different notes, like only a magic xylophone would do.

4
How can Spider-man lift the Winter Soldier's metal hand so easily?