This movie starts out with a convenience store being robbed in a desert setting. This bounty hunter(a Nolte or Busey lookalike) comes in and shoots the store up with a sawed off shot gun. I believe he collects the bounty on the armed robbers. Outside this store was a sky blue mid 50's Ford Stepside pick up truck. The bounty hunter drives a Caprice classic (mid 80's chev car) he lives in an old warehouse in which he pulls in his car into a cargo elevator and it takes him upto the second floor where he lives. He drives his motorcycle around his living room in this warehouse and drinks Jack Daniels from the bottle.

That's about all I caught of this movie on late night cable. Any leads would be appreciated.

I'm pretty sure this is a 1986 movie starring Rutger Hauer called Wanted: Dead or Alive. The guy riding the bike is his friend who is storing his bike in Nick's (Hauer) wharehouse home because he doesn't want his wife to know he's bought it. This movie also stars Gene Simmons from the rock band KISS and TV show Family Jewels. Gene plays a Middle-Eastern terrorist who kills Danny (Nick's friend) because Danny is mistaken for Nick. Nick then goes on a hunt to track down Malak Al Rahim (Simmons) for a large bounty, which he transfers to Danny's widow. He does this because he feels guilty for Danny's death. The final scenes of the movie are with Al Rahim standing bound with a grenade in his mouth. Nick leads him to the police officer (played by Robert Guillaume) using the "pin" on the grenade. Nick is supposed to get a bonus for bringing him in alive. Instead he says, "F*** the bonus" and pulls the pin, blowing Al Rahim's head off in the process. Very apropos ending! 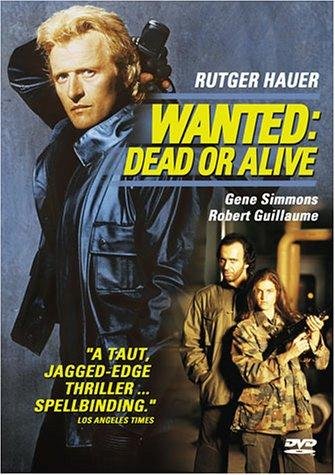