Why did Bicycle Thieves end so abruptly?

I read that Bicycle Thieves is one of Leonardo DiCaprio's favorite movies of all time. I saw it.

It just ended abruptly. I was really hopeful for a happy ending that he would win his bike back but rather he ends up with no bike in the end.

Could someone help me understand the reasons for that?

In the early years of Cinema, Hollywood was far from the biggest player in the game.

In fact, Europe could have been said to be making the biggest contributions, certainly stylistically...

The Germans had Universum Film (UFA), which helped make some of Cinema's most important Movies (Metropolis, The Cabinet of Dr Caligari, M... the list is in-exhaustive). They were, pre-war, perhaps the biggest players, and actively engage in exploring the relationship between Art and Cinema; this culminated in an aesthetic style of Artifice which was largely rejected by American Cinema.

Perhaps the second most celebrated movie studio was Cinecittà (Literally Film-City), Italy's premier film studio (it remains so to this day, although its output is no where near as culturally significant as it once was. 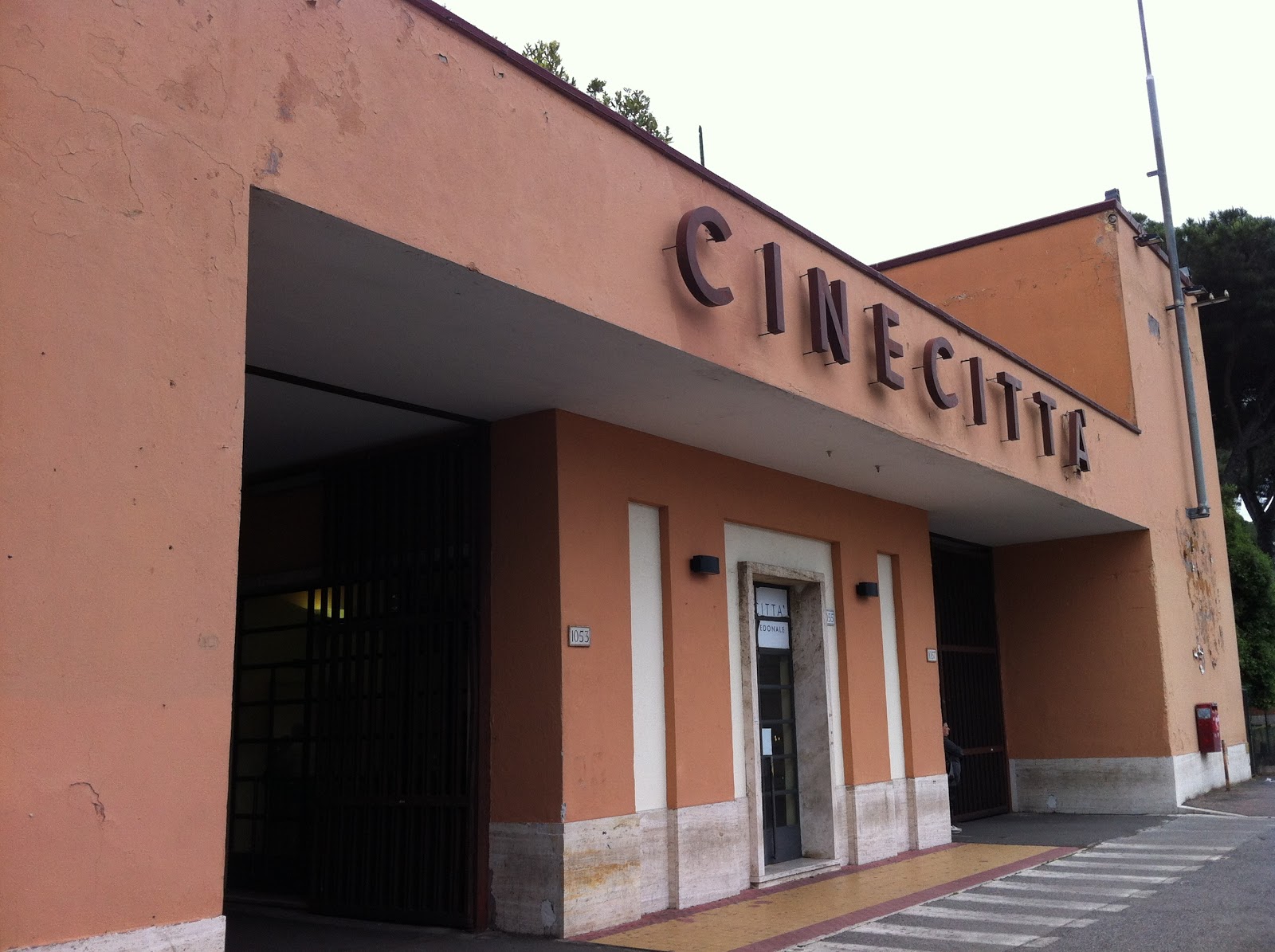 Both studios pursued not only artifice, but the idea of spectacle (not to dis-similar to a lot of Modern Cinema).

As such they would construct gargantuan sets, with thousands of extra on a huge scale of production. Perhaps the Most famous of these is Giovanni Pastrone's Cabiria, which produced some of the most impressive sets in cinema to date.. 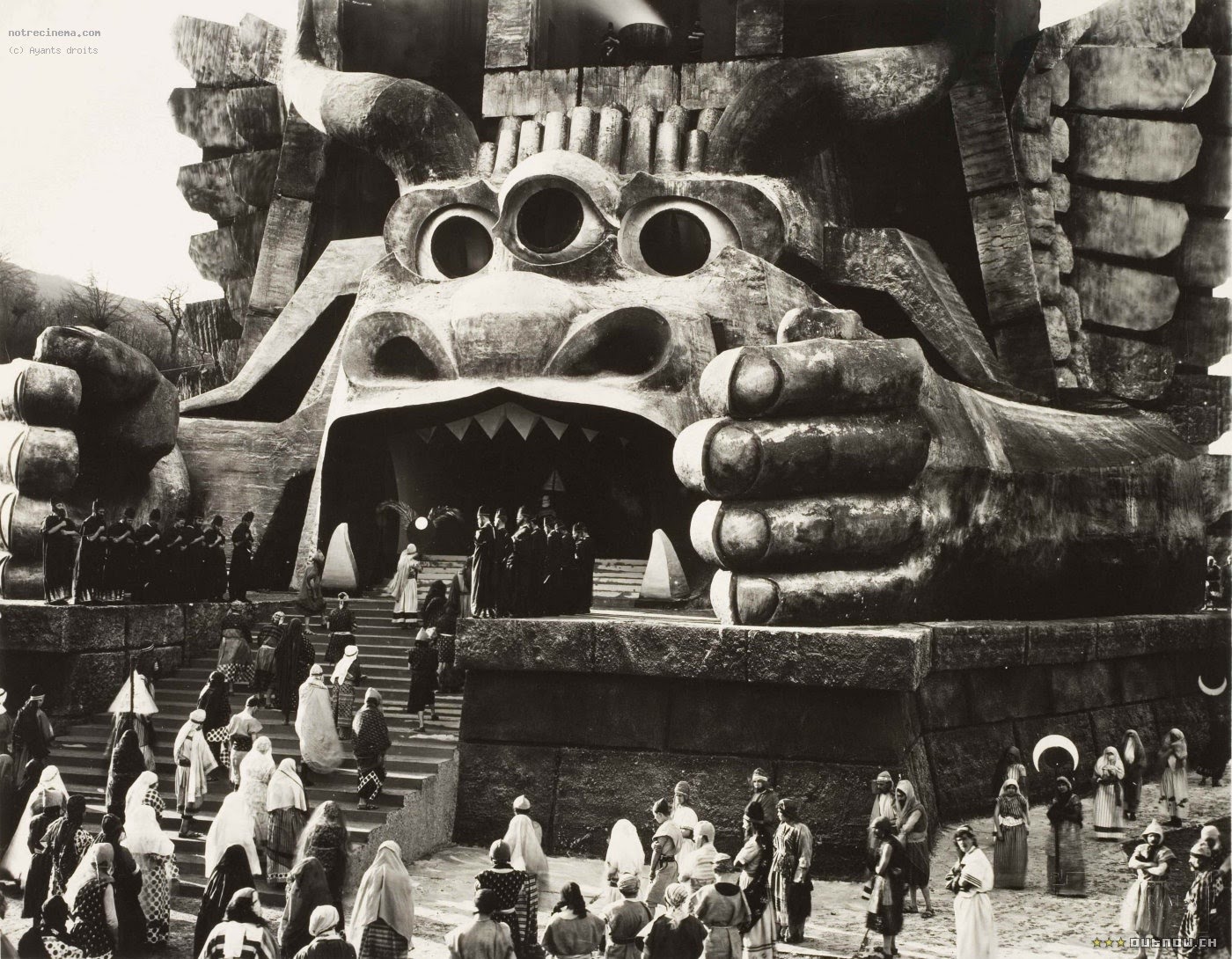 These movies bathed in opulence and extravagance, privileging the image first and foremost, and were produced by the Super-Rich, attempting to combine high-art with monetary gain and international success.

Cabiria itself was co-written and produced by the Ultra-Nationalist Gabriele d'Annunzio, and was later adopted by the Italian fascists as part of their cultural legacy, a mark of Italy's superiority.

Obviously, the Roman Empire was a common backdrop to these Movies, distributing early propaganda to the Glory of Rome.

...Of course, when WWII broke out, Cinecittà was blown to pieces by Allied Bombing raids... 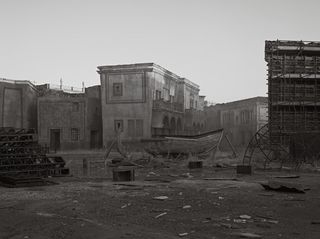 This was of course a great shame, but ultimately proved to be a positive...

Cinecittà had been left in ruins, but so had the old institutions that made their opulent spectacle cinema. Having played a major part in the Italian propaganda effort, most of the board of administrators were indicted, imprisoned, or much worse.

This left Italy with a clean slate, and a total disconnect from the cinema of the past.

Having been betrayed by the previous generations, who had been fascists and willing participants of the Axis, modern Italy was quick to disavow the actions of their seniors.

One of the first films (if not the first) to do this was Rome, Open City, of which principal photography began during Nazi occupation.

The film was cobbled together from various elements: Nazi uniforms were found (or stolen!) from the retreating occupying forces, and footage of real soldiers was used in the film. With Film stock being in such limited supply, the film is shot on different types of stock, which is visible when watching un-restored versions of the Movie.

Not only was the film stylistically rough, its 'grittyness' found its way into the content of the film, and we are left with a damning indictment of occupied Italy, its citizens abandoned and betrayed by their leaders.

The film resonated with Italian, and European audiences, and its hopelessness and failure to cave in to a happy ending was refreshing for cinema of the time.

This film, with a handful of others, was the dawn of Neo-Realism, perhaps Italy's greatest contribution to cinema.

Neo-Realism was a total, genuine rejection of the decadence of the previous generation, and sought to unify the real citizens of Italy with common sympathies. The large scale productions of UFA and Cinecittà were out of reach financially, and also unwanted. This was the first Real Cinema of the world, that sought to explore themes and commentary of the worlds Lower classes. A great debt is owed to these film makers.

The most popular of these films, and perhaps one of the most beautiful, is Ladri di biciclette, The Bicycle Thieves. 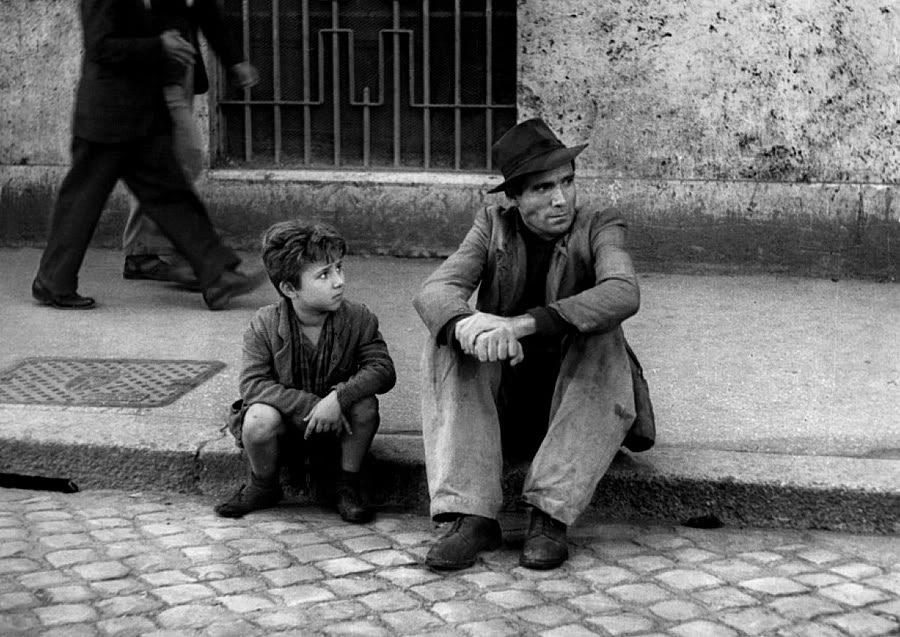 The film uses metaphor and parable to explore the sense of betrayal and hopelessness of post war Italy.

With no jobs and no prospects Antonio waits for casual labour, eventually gettinga job putting up film posters. Notably, these posters are for American Films, as Hollywood had the only real functioning Film studios (a fact they capitalized on, flooding the European market with Movies). Antonio is forced to become complicit with these invading cultural forces, to collaborate with the enemy simply to feed his family.

In order to do this job, he requires a Bicycle, and so he and his wife Maria trade their Linen for a Bicycle, literally trading in their clean sheets for prospects. The Bicycle make is a Fides, which was the Roman Goddess of trust, and hope.

Antonio's bike is stolen from him, and the rest of the film is spent searching for the culprits.

(as an interesting side note, in America the film was translated to The Bicycle Thief, removing the plural from title in what is a typical misinterpretation of the subtle subtext of the film).

Joining him in his search is the enigmatic Bruno, Antonio and Maria's son. 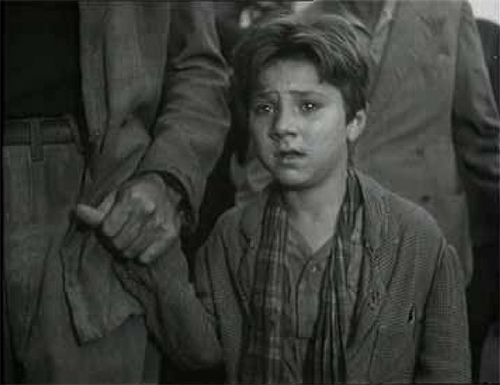 Throughout the film, Bruno, representing the emergent generation of post-facist Italians, proves not only his resourcefulness and capability, but also his eagerness to participate in helping his father, in re-building their life, in 'grafting'.

Throughout the film, Bruno strides confidently ahead of Antonio wherever they travel to, and Antonio lets him, allowing him to believe he has more power and control than he possibly does. This is as to not disillusion his son, and to empower him giving him the one thing his father has left to give: Hope.

Note how Bruno is always allowed to participate in the search...BUT... whenever Antonio is preparing for an act of violence, or of brutality, or simply something he doesn't want Bruno to be aware of, he tricks him and asks him to do something else.

In the Piazza Vittorio market, Antonio tells Bruno to 'look for Bells', whilst he engages in an altercation with a vendor. 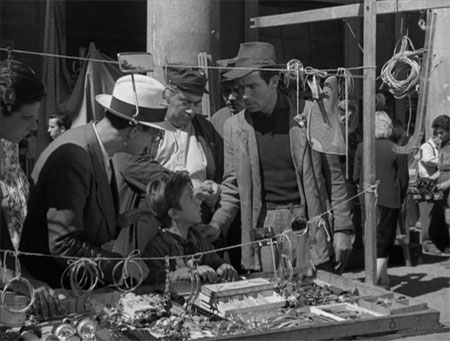 When Antonio seeks the old man for questioning, and ostensibly for violent interrogation, he makes Bruno wait by the bridge.

When Antonio sees the thief running into a Brothel, he makes Bruno Fetch a policeman.

Finally, when Antonio sees the unattended Bicycle outside the football stadium, he sends Bruno home.

Throughout the film, Antonio is trying to shelter Bruno from the harsh realities of post-war Italy; whilst maintaining his spirit and empowering his child.

This illusion is almost shattered when Antonio strikes Bruno, but is quickly saved by his fatherly love.

At the end of the film, when Antonio is caught stealing the bicycle outside the football stadium, the illusion is finally shattered. 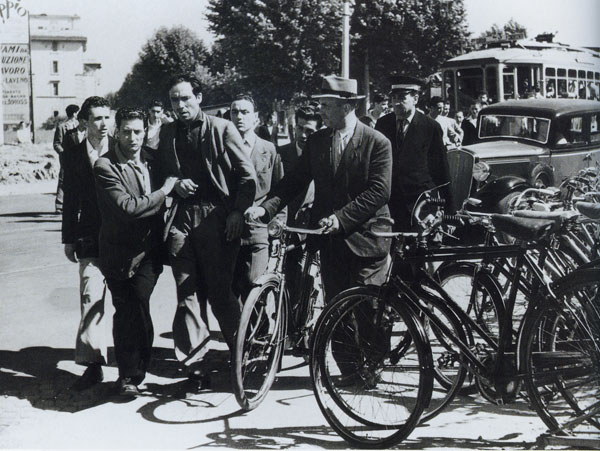 Antonio has himself become a Bicycle Thief, the very thing he has been teaching Bruno is the epicenter of Rome's troubles; people pursuing their own agenda, instead of attending to their collective troubles.

Now Bruno knows what his father is capable of, he will never be able to see him the same way, despite his protestations and tears.

The Illusion is over, and so is the film. The previous generation have failed the children of Rome, and their legacy is one of hypocrisy and betrayal.

This is a film that was intended to show the poverty and desperation of post war (World War II) Italy, as well as the frustration of the general populace. The protagonist is basically powerless against the thief, as he cannot "prove" anything, yet he is still without his bicycle (Which is a valuable commodity, for transportation to/from work, etc.) If there was a happy ending, that would soften the impact of what the filmmaker was trying to portray.

There are also scenes to drive home the fact that everyone seems to have their own bicycle, as shown by the scene near the end where everyone around the protagonist seems to be on a bicycle, coinciding with the opportune unlocked bicycle.

The final scene is not really abrupt, but it does underscore the powerlessness of the average person, and the uncaring willingness of the world to step on the already downtrodden. It's also an homage to many of the Charlie Chaplain film endings, as Di Sica was a fan of that filmmaker. (Last reference from the Wiki page).

It shows the harsh reality of the post war condition of Italy and the reality of life begins with battling and one must catch out his problems alone.

Not the answer you're looking for? Browse other questions tagged analysis bicycle-thieves .

16
To which degree were Spaghetti Westerns influenced by Italian Neorealism?

18
Does Bane's voice change in this scene because of plot?
16
Why did American History X end so unexpectedly?
17
Why did Fury (2014) end this way?
4
How come the underlying theme of Birdman is being seen as redemptive, rather than sealing the character's fate as a failure?
7
What does the ending of 2015's Macbeth mean?
42
Why did Vision end up in Iron Man's team?
8
What did the titular “fish called Wanda” represent in John Cleese's classical comedy?
13
Why did Max leave the Citadel at the end of Mad Max Fury Road?