Is there enough evidence in the mid-season finale to conclude "Little-Ass-Kicker's" fate?

Near the end of The Walking Dead season four's Mid-season finale, we are given a glimpse into Judith's car seat: 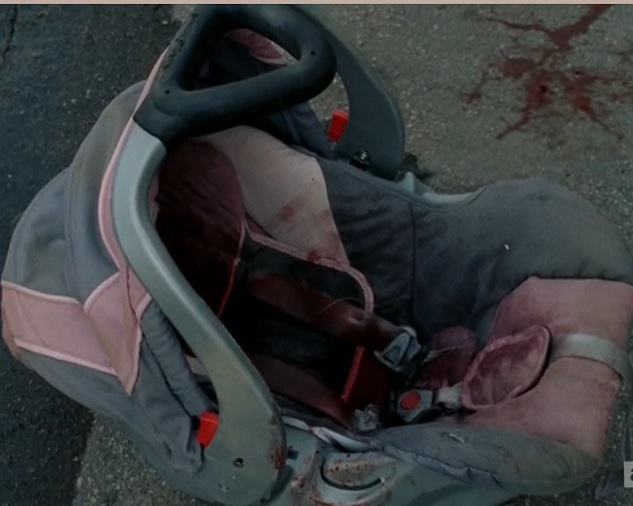 We know she was in this car seat based on a previous scene: 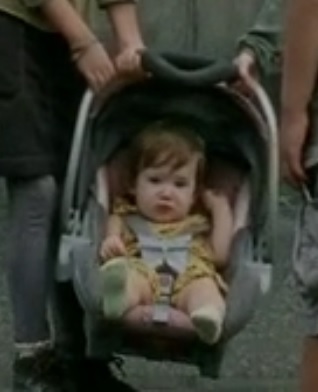 I assumed at first that this was the end of Judith.

However, after reviewing the images, I think we are left with a cliffhanger.

The biggest clue is that the buckles are undone. No walker is going to fool with seatbelts.

Are there any more clues from the episode that would help prove/disprove that Judith is alive?

NOTE: I just searched "judith carseat buckle" and noticed there are several pages with the same question.

There is no answer. Even creator Robert Kirkman (on the episode of Talking Dead that followed the show) would not confirm anything. He did joke "that's a lotta blood in that car-seat, I don't know. (laughs) Yeah. You'll have to tune in."

It is currently unconfirmed.

The buckles being undone do not confirm anything as if you were to try to pull the baby out without undoing them they are quite likely to be the things that give first (rather than the straps).

Even if someone had taken her out there is no guarantee that they got away safely.

However, it is perfectly plausible that someone could have rescued her. Running with a baby carrier is very difficult, they are awkward and quite heavy (I have two toddlers so I have a bit of experience with them!) so a rescuer would almost definitely have taken her out and left the seat behind.

However, I have a child not much older than Judith. I found the scene horrific to watch and am desperately hoping she is still fine!!!

There is clearly nothing in the episode to definitely conclude what happened to her. If there would be any definite answer to her fate, it would have been spelled out. So you are correct in your statement that this is basically just a cliffhanger. What else could make you bite your fingernails more than not knowing if the little baby made it or not.

But the inconclusiveness of this is also what makes it pretty likely that she somehow got out of there alive. She just disappeared not to be seen again in the episode and a huge stain of blood could easily suggest that she's dead. So if you've ever seen any TV show or any kind of cliffhanger, this makes it pretty evident that this exactly not what happened to her. And even in a TV show that doesn't hesitate to kill off people, including children, she still has the bonus of being a baby, especially the child of a major (if not the primary) protagonist. All this, albeit far from conclusive, doesn't leave much doubt for me that there didn't happen anything heavily terrible to her.

And to finally conclude this, as the episode "Inmates" (S04E10) shows later, she indeed made it and it was Tyrese who brought her out of the prison alive, together with Lizzie and Mika.

9
Besides the Season 5 premire, have there been any other post credit scenes in The Walking Dead?
5
Who did Rick Grimes shoot at the end of the Season 5 finale?