Ask Question
Asked 6 years, 4 months ago
Active 4 years, 3 months ago
Viewed 833 times
6
votes
Closed. This question is off-topic. It is not currently accepting answers.
Closed 2 years ago.
Locked. This question and its answers are locked because the question is off-topic but has historical significance. It is not currently accepting new answers or interactions.

I'm trying to ID a movie that I had caught the end of as a child.

The specific scenes that I remember are a cat-and-mouse exchange between the protagonist and a couple of henchmen in a giant, well-lit, enclosed maze or labyrinth. The antagonist, if I remember correctly, was monitoring the event from some sort of control room that had a giant screen representing the maze and yellow and red dots representing the protagonist and henchmen. The protagonist eventually takes the electronic tracker off of his belt (I believe) to mislead the henchmen into believing they have him cornered.

I also clearly remember the ending, in which the antagonist compound is vaporized by some sort of laser blast, which may have been from a satellite - I'm not sure.

The only other information I have to give is that there was definitely some sort of female lead / damsel in distress. All-in-all, the movie definitely had a very "James Bond" feel to it, although I'm relatively certain that it isn't a Bond film.

The film is called Once Upon a Spy. It is from 1980 and Ted Danson has the Lead role.

Ted Danson plays a computer genius who gets involved in the theft of an important NASA computer, then thrust into the world of espionage with Christopher Lee. 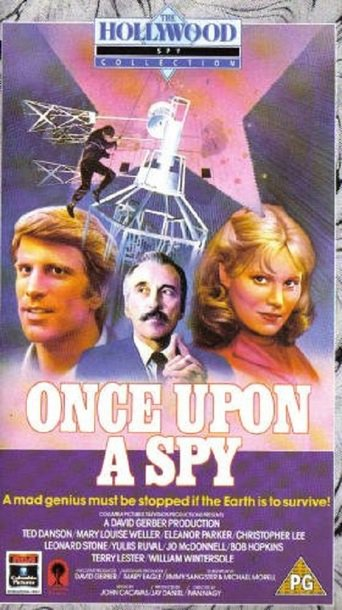 You didn't say it starred Arnold Schwarzenegger, which is a quite memorable element of this movie, but your memories are so vague that is might have missed you :)

Anyway, this is the trailer: http://www.youtube.com/watch?v=WFMLGEHdIjE

And here's why I think it may be it:

Check out the trailer and let us know if it looks similar. I also advise to watch the whole movie anyway - whether that's it or not, it's still a good movie :)