Why is the movie titled "Skyfall"?

Why is the twenty-third James Bond movie titled Skyfall?

I watched the movie but couldn't find him falling from an airplane or something...

In an interview, Purvis and Wade, authors of the film, claim the title "fell from the sky":

Robert Wade: “We were looking for a name for this house…”

Wade: “Exactly. It’s evocative, and you don’t really know what it means. And it was two o’clock in the morning, and the script had to go off, and I typed ‘Skyfall’. So it sort of fell out of the sky, actually. And I never thought that that would end up as the title of the movie. But it obviously struck a chord. But if we’d thought the name of the house would be the name of the film, and the name of the song…”

Purvis: “We’d have talked about it a little bit longer.”

Ian Fleming, creator of the James Bond character, never named the Bond ancestral home, but in You Only Live Twice, he did write that Bond's parents died in a mountain climbing accident, so interestingly, they fell from the sky. 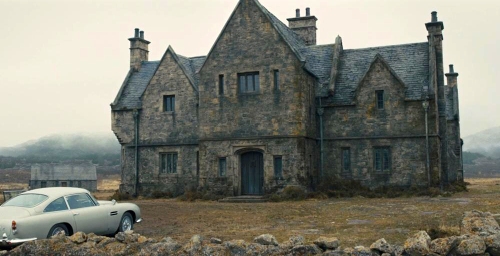 ... the Bond family resided at Skyfall Lodge, though James Bond had not visited his ancestral home since his parents' death. Its only resident ever since has been gamekeeper Kincade.

After they died, Bond's parents were buried in the chapel on the grounds.

Not the answer you're looking for? Browse other questions tagged title james-bond skyfall .

22
Was "Licence to Kill" originally titled "Licence Revoked"?
15
why did Silva steal the hard drive in Skyfall?
43
Why couldn't Bond have backup at the battle of Skyfall?
27
Did James Bond fail his mission in "Skyfall"?
4
What happens to the hard drive with agents' names in Skyfall?
19
Who is the Bond Girl in Skyfall?
6
Why is the movie titled "Fracture"?