What's the name of the game that Dade plays?

What's the name of the game that Dade plays (the one he gained highest score by beating Kate)? Or at least suggest a 3D game like that. 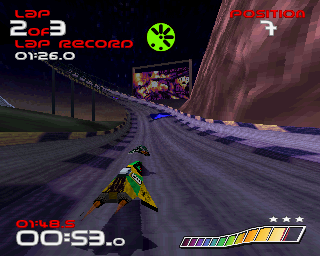 The game is called WipEout.

Wipeout (stylized in promotional materials as wipE'out") is the first in a series of futuristic racing video games developed and published by Psygnosis. It was originally released in 1995 for Sony PlayStation and PCs running MS-DOS, and in 1996 for Sega Saturn. In 2007, it was re-released for download on the PlayStation Store, first for PlayStation Portable on 8 March, then made playable on PlayStation 3 months later.

As WipEout was being worked on the people behind the movie Hackers came calling. They wanted Psygnosis to recreate WipEout for the film. Something super cool, something sci-fi, something fast. After a couple of weeks' work the result was recognisably the dirty aesthetic from the early WipEout demo fleshed out with a world and effects. As it turned out, Hackers and WipEout launched in the same month.

Additional confirmation can also be found on the film's WP page and this YouTube video's summary:

Dade and Kate having a friendly competition with what looks to be an arcade version of Wipeout by Psygnosis. Psygnosis was notorious for publishing the most unusual but creative games of its time like Lemmings, Obitus, and Shadow of the Beast until it was acquired by Sony. The song playing is Cowgirl by Underworld from Dubnobasswithmyheadman. What a horribly awesome film. I loved every cheesy minute of it!

Not the answer you're looking for? Browse other questions tagged hackers .

14
What does the Native American Chief symbol mean in the Hackers movie from 1995?