How could Eisenheim achieve those reflections on the scene in that era?

In The Illusionist (2006), how could Eisenheim achieve those reflections (visions) on the scene? Even in one of the scenes, there was a (ghost) boy walking through the audience. Given that the film takes place in early 1900s, were that kind of illusions possible in that era? 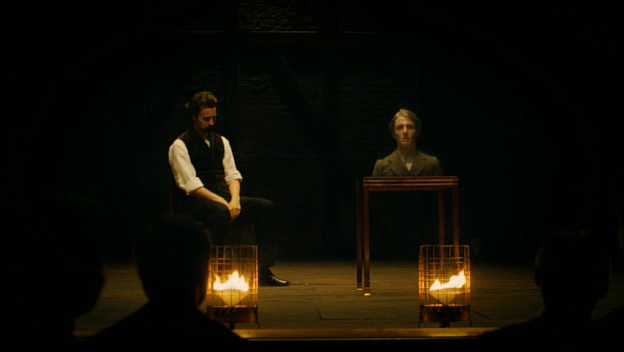 Magical performances comprising of spirits being summoned on stage where pretty common even in the 19th century. The effect was achieved indeed with the use of smoke and mirror. However, a typical tool in usage was the Fantascope aka Magic Lantern. This apparatus is also seen in the movie but can be easily overlooked as normal lanterns.

I found this interesting piece of trivia on IMDB:

The method for creating the ghosts as shown to inspector Uhl involved the projection of a pre-recorded image into a hazy background. Since the ghosts Eisenheim conjured could speak to and interact with the audience, he most likely used a different method popular among magicians at that time. A fantascope was used to illuminate a real person off stage. The image was reflected off of a mirror or glassplate, creating a ghosted image. The lanterns that Eisenheim tells his assistants to leave behind when they are packing up the workshop bear a strong resemblance to fantascopes.

It's suggested in the movie itself that these illusions are possible. A couple of performers (perhaps) demonstrate to the inspector how it could be done using what would be called Smoke and Mirrors (S&M) today. It can be surmised that Eisenheim perfected the technique and used it for his illusion.

Not the answer you're looking for? Browse other questions tagged plot-explanation realism the-illusionist .

33
How could Andy Dufresne do so much after his escape without being caught?
14
How could Eli do all those things?
12
How was Meera Reed able to achieve that?
11
How come he didn't use the most obvious solution to “grasp” time - dates?
10
How could Ryan land in New York in early morning?
4
Considering his wound, wouldn't Cheyenne have suffered far more?
5
How is one “Deemed Worthy”, to acquire the Greatsword “Dawn”?
19
Can there be sunlight in Australia and Texas at the same time?
2
How did Claudia come back from the dead in Dark?