In The Hitchiker's Guide to the Galaxy an alien from Betelgeuse visits the earth and calls himself "Ford Prefect" I get the impression that this is a joke which has been lost as the story has aged. Is there a double meaning for Ford Prefect which viewers/listeners/readers at the time would have found funny?

The Ford Prefect was a car that was reasonably common in the UK up until the 1960's. 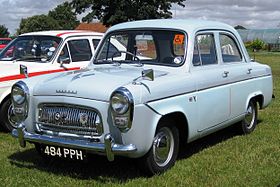 They're no longer produced, so the joke might be lost on a modern audience.

I think a more pertinent answer might be, that the Ford Prefect was just about one of the most basic un scientific, least futuristic cars on the road at that time. They were cross sprung for economy, that meant just two leaf springs per car instead of the normal four, the wipers ran from a vacuum tank on the manifold which meant they slowed down or stopped the faster you went ( handy for overtaking ) and the engines were side-valve, ( not uncommon but certainly old ) . Despite all this they were lovable, I had one , and believe it or not , it's still around or so I'm told. I think the name was used more in sarcasm than anything else. By the way ,if anyone knows where RAU 414 is today , please do get in touch.

A typographical error, transposition of the letters e and r, is all that is needed to produce prefect from the word perfect, which means error-free. That dry little linguistic joke, combined with the absurdity of naming a person after a car brand and model, sort of adds up to a joke, albeit not an especially funny one.

Not the answer you're looking for? Browse other questions tagged the-hitchhikers-guide-to-the-galaxy .

9
Why did Ford Prefect try to introduce himself to a car?