Why doesn't Wolverine appear in his iconic costume in X-men?

I'm just wondering why Wolverine does not appear in his iconic costume when even in The Wolverine, there is apparently a deleted scene to show such a costume?

This deleted scene can be scene in the DVD/Home Release extras.

Director James Mangold explains why it wasn't used in The Wolverine:

Superherohype.com: Oh definitely. Now before I let you go, I have to ask about that alternate ending where we see Wolverine’s classic costume (pictured below), was that your idea and why didn’t it make the final cut?

Director James Mangold: It was my idea and it was something I tried, I improvised on the set. The box was actually empty on the set when shot the material with Hugh and Rila, but I tried it out because I was just curious. I had also felt the fans’ desire to see something like that, obviously the fans’ desire to see something more than that. The trick was that I felt like, and I think the studio felt strongly that I was kind of handing a hot potato to whatever films followed in the sense that it’s one they couldn’t fulfill or one that we didn’t know if they could fulfill since we hadn’t even scripted them yet. So this implication that he would be wearing them in the next film which I couldn’t guarantee since I didn’t even know where I or who or what would be making one, and I certainly didn’t want to burden Bryan (Singer, director of X-Men: Days of Future Past) with suddenly based upon the last six seconds of the film throwing a wrench in the works of what he was up to.

So one reason is corporate politics and professional respect.

But I also have to say, for Wolverine fans I felt it would be hugely rewarding, but when we screened it, and we did with that ending on, it was very interesting that 60% of the audience didn’t understand what was in the box. So you also have the fact that you’re going to be ending a movie with a moment where a huge majority of the audience was going to be going “Huh?” So that definitely wasn’t a feeling I wanted, but I was very torn about it and thought it worked.

The second reason is that only comic readers or cartoon watchers, established fans who know of Wolverine outside of the Hugh Jackman movies, would recognize the suit. Everyone else was confused even through its clearly a suit and mask.

It also bumped a little when I went to Montreal and shot the credit scene that kicks you toward “Future Past,” it seemed to bump against that. You’re showing him open the box and have a costume in the end and then you’re coming from black and having him wearing street clothes. It just seemed like we were creating more questions than we were answering and maybe it wasn’t the most responsible thing to do.

The last reason is that the fan nod would cause problems with the stinger teaser that leads up to DOFP.

So, now that we explained the The Wolverine alternative ending, the reason they never used the classic suit in the rest of the films is basically the same thing.

Only hardcore fans would know about it, while it would clash with the rest of the stylistic choice they made for all of the X-Men, as covert agents. They intentionally moved away from the colorful individualism of the X-Men suits, and went with a Uniform, literally meaning One Form. As the joke goes in X1: 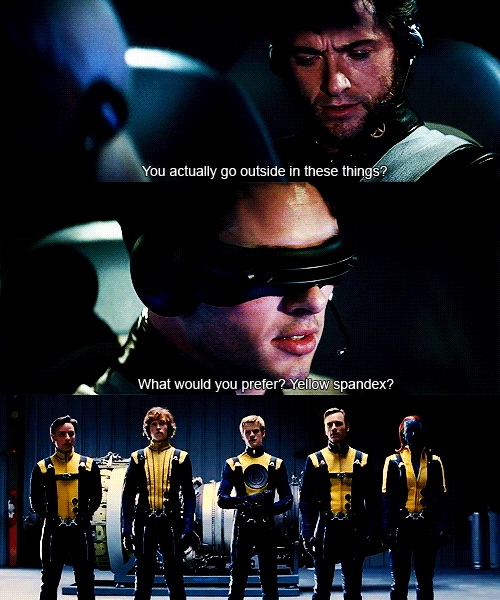 Funny enough, First Class forward returns to individualistic costumes, as the X-Men get more established in the new timeline. The old timeline forced mutants underground, but the new timeline of DOFP, having a mutant publicly save the President of the United States, has prevented the X-Men from needing to be a overly militaristic group.

Well, mostly because the costume is a bit ridiculous when taken out of the context of four-color comics. Might as well ask why Logan's hair doesn't stick out to both sides as much as it does in the comics: just because something works, visually, in the medium of print comics doesn't mean it will work in the medium of live-action cinema.

As @AnkitSharma mentioned in the comments, the deleted scene is probably a nod to comic fans who have a sentimental attachment to how Wolverine looks in the comic books. But in any adaptations changes must be made, and visual and aesthetic changes most of all, to fit the new medium.

0
Why are the costumes in comics and movie adaptations not the same?

8
Why did Yashida "adopt" Yukio?
5
Why does Logan remember Yashida?
13
Why doesn't Wolverine die when he loses his ability to heal?
15
Does Wolverine still have his adamantium claws after the change in events?
6
Where do the timelines of X-Men: The Last Stand and X-Men: Days of Future Past lie exactly?
8
Explanation on the condition of Wolverine
4
Why Mystique's claw got broken into two piece
3
Why didn't X-24 regenerate?