What is the meaning of Teddy's memories of Dachau?

During his visit on Shutter Island Marshal Teddy Daniels repeatedly has traumatic memories of the liberation of the KZ Dachau during his service in WWII, where he saw the piles of corpses, let an officer die slowly after a failed suicide attempt and ultimately shot the guards with his fellow soldiers. He even thinks to remember Dr. Naehring as one of the doctors from the KZ, yet this accusation is rather ignored by everyone, including Teddy, while a former war criminal working as a doctor in a U.S. asylum would indeed be a big scandal.

But of course, as we learn at the end, Teddy is an unreliable narrator and the whole investigation was a staging to cure Andrew Laeddis from the alternate reality he invented to suppress his guilt in his family's death. At one point Dr. Cawley even says

You were at Dachau, but you may not have killed any guards.

So I wonder, to which degree were his memories of Dachau really Andrew's memories and to which degree were they just part of Teddy's false reality and what is their further meaning inside this false reality? If they were all just made up by him, how do they relate to the rest of the story, or were they just supposed to be a distraction for the audience, giving the conspiracy-laden and disturbing Teddy-reality yet another strange angle?

I've just answered this question where I gave my own take on events, so I'll repeat some parts of it here as hopefully it can provide some form of an answer. Paraphrasing from the previous answer:

Andrew Laeddis fought during the war and returned home as a war hero to his wife, Dolores, and his kids. However, his wife Dolores was mentally unbalanced. It seems Andrew knew this, but possibly PTSD after the war caused him to be distant and he didn't realise how unbalanced she was. Regardless, Dolores murdered the three* children and in retaliation, Andrew killed her.

These actions cause Andrew to break down and lead him to become highly mentally unstable. He created a second persona, Teddy, who is still a war hero and is now a Federal Marshall. The entire movie tracks Teddy's supposed attempts to find patient 67 - who in reality is Andrew himself.

The memories of Dachau, as I'm sure you know, refer to the Dachau liberation reprisals, where German concentration camp guards and POWs were killed in retaliation for their part in the horrific conditions at Dachau.

Your quote from Cawley shows that he is unlikely to have taken part in them. Cawley could be lying, but it seems unlikely why he would need to lie about this. However, given Andrew breaks down after the events with his wife and views himself as a complete monster, I choose to believe that he has false memories of Dachau as he views the actions being performed there as particularly horrific. Therefore, they fit his own emotions perfectly - he thinks of himself as a monster, so imagines he took place in these monstrous events.

I don't think we'll ever know how much of the memory is fabricated. I don't even know if he witnessed the things he dreamt of or if they are complete fabrications. But given Cawley's comments, my final conclusion is:

He was there, but didn't take part in the killings. However, he believes he did as he has such a horrific view of himself as nothing but a killer after taking the life of Dolores, his wife.

*This answer originally referred to the two children, as the original asker's question did. However, there were three children and so the answer has been updated.

I choose to believe that he has false memories of Dachau as he views the actions being performed there as particularly horrific. Therefore, they fit his own emotions perfectly - he thinks of himself as a monster, so imagines he took place in these monstrous events.

To confirm that he has false memories I noticed that the concentration camp that Scorsese shows is not the one in Dachau.

Take look at the gate: If it was Dachau it should have had this gate: 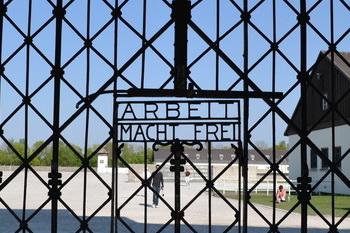 But the movie showed this one more well known one, Auschwitz: 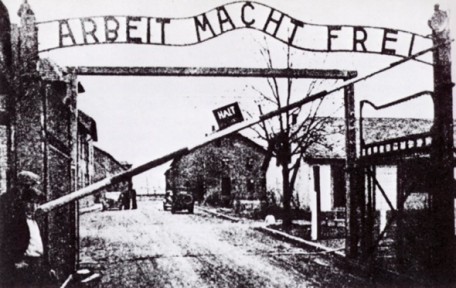 Personally, after watching it, and now reading these things...no one is even bothering to take in the possibility of everyone framing him, that he was right, and he wasn't for 2 years in that place at all, and whatever happened might as well be real as it can get and not a false reality that Daniels created, which, in my opinion, he didn't created.

They might as have made a conspiracy. We have never really given the explanation to why they would do such a thing, which is a great story leaving such things out, left for viewer speculation, since it's not a new thing in the movies too. And I kind of don't believe it could've been a straight forward movie about him being mentally ill and creating it all, because it all felt predicting and obvious, too much that I started to think the opposite of what movie tried to tell me (which, when you think about it, is not what movie tells you, if you will start thinking like I do, that is), and I don't think that such great director as Martin Scorsese would be so obvious about it, he made it for us to question reality, or play some mind games, and if he does that, then why would he be so obvious about letting us be baited on the fact, that he is insane, it's a fake story etc.? We basically would fall for those guys as well, thinking we're mentally ill as well, not questioning what is real and what's fake, and how much of it all is real or fake, not specific things. I personally wouldn't bother asking how real were his memories, since it was explained that lobotomy can do so much, that you wont even remember, implanting false memories, which is part of the experiments that are going on the island, it was constantly explained in a very subliminal ways.

Though, I am not totally denying it that it might be in fact him being mentally ill and created false memories, but I kind of sway to the side of hard-to-believe it, that it all was true what he thought, because...like I said, it was thrown onto us, as viewers, all these things right from the start, and it went predictably onwards from there, so I doubt that it was all a lie what movie showed us, and that he was mentally ill.

It was told in the movie as well, the dialogue with Noyce, and Noyce acknowledges the fact that he has a partner, but questions their relationship about how much they have worked together, questions his trust in him basically, yet, for some reason, no one else acknowledges it later in the movie, everyone later says that he was alone, that he has no partner, neither with such a name. Quite a perfect conspiracy, a lie, that started to unfold, slowly turning Daniel crazy to the point where he starts to believe it. You know the saying, or whatever it is, that if you constantly keep telling the lie, it turns into a truth? Basically I believe it happens here, they keep saying it until he believes it, or we believe it, but at the end of the movie he still remains sane (to me at least, but for those that think opposite, he might look to be the person that hasn't been "cured" enough that he starts to think and believe whatever they tell him.

Why Noyce says that "they already won" when Daniel answered how much he trusts his partner? Because he knows who that partner is, probably going by previous experience of how he got on the island as well, Noyce knows that if Daniel places his trust into that guy, he surely will end up playing the already plotted out story for him, slowly turning him insane.

In the lighthouse, Dr.Cawley tells him that he "...swore before the Board of Overseers, that I could construct the most radical, cutting-edge role-play ever attempted in psychiatry...", sure it might be an interesting thing, but what role play? Letting him loose to play as detective? Why Cawley didn't even acknowledged that he had a partner if it was a role play? There are things that do not fit well with what was going on, and I started to question it all, or more likely, as movie went on, the story kept answering my questioning.

The cliff part, about his Partner falling down, coincidentally he developed visions soon after he got there, created by the pills or stuff he was given, like Rachel in the cave told him. And the fact that he would go to check the path to lighthouse alone, was perfect chance for his partner to vanish and others to start to take the next step, by saying that they don't know any partner. Obviously we would start to think that it slowly starts to show that Daniels starts to face the reality, or the reality we've been given, that it slowly unfolds. But like I said, I doubt that. So why was the cigarette perfectly placed on the edge of the cliff? He would start to think that the partner fell down for unknown reason, so he started to believe his fear of his partner being dead, jumped from cliff, so his brain from given drugs made a hallucination for a short moment, but actually he just left in order for him to start to go crazy.

Why would the woman, who asked for a glass of water at the interrogation (funny fact: she drank it with her right arm, and placed down the glass with the left arm, not to mention the fact that she didn't had a glass at all at the moment of drinking), would write on his note to "RUN"? She knew, just like Rachel said, everyone knows.

That is my answer to what, or how real or fake is his memories of campaign in WW2. Not everyone in WW2 developed PTSD, or any other mental problems, but it was a great reason for them to use it as basis for creating the lies about him, or tell him otherwise.

This video can make you question more things that you knew, and maybe even answer your asked question.

OK, so I watched the movie this week and I've been searching crazy for things about it. I found a video that explains this.

The thing is we can only know that Daniels/Laeddis was at Dachau because Dr. Crawley confirmed it, but most of his memories of the episode were probably false.

Mahler was a Jewish composer, so he would be banned in Nazi Germany. The thing is, during the time the movie is set, the specific quartet that he listens was missing. That piece was only found in the 1960s (after even the time the main plot happens, but I think that might be a goof).

Anyway, the video I saw says that this might be (1) a sign that this memory wasn't real, and (2) an allegory to Teddy Daniels trying to find his missing piece.

Not the answer you're looking for? Browse other questions tagged plot-explanation analysis shutter-island .

3
What is the timeline of incidents taking place in Shutter Island
3
How many children did Andrew Laeddis have?