Why would the satellite debris have followed the Tiangong out of orbit?

The antagonist of the film Gravity is a wave of shrapnel which circles the earth every 90 minutes. The result of a "controlled destruction" of a defunct Russian Satellite (what is this, the cold war?!) the crew of the Explorer shuttle and the ISS are threatened by this because it matches their altitude, and is traveling at a much greater velocity.

The Hubble telescope is listed as being at an standard altitude of approximately 559 km, way above the Kármán line (the boundary of the earth's 'atmosphere' and the altitude at which foreign objects experience atmospheric effects in the way of friction/heat).

Towards the end of Gravity, Mission Specialist Ryan Stone (Sandra Bullock) manages to navigate her way to Tiangong, the Chinese space-station which has been affected by the same shrapnel wave and knocked off it's orbit, back towards earth.

The debris storm has its own musical motif, which begins to play: and Stone realises that as another 90 minutes have passed, the storm has re-orbited and is on its way back...

As Stone struggles to get inside the escape capsule, now entering earths atmosphere Pieces of satellite debris begin to strike the vessel, punching dents into the side of it.

If the satellite debris was orbiting at 559km, and yet the Tiangong is crossing the Kármán line at 100km, why would the debris have descended over 400km down? 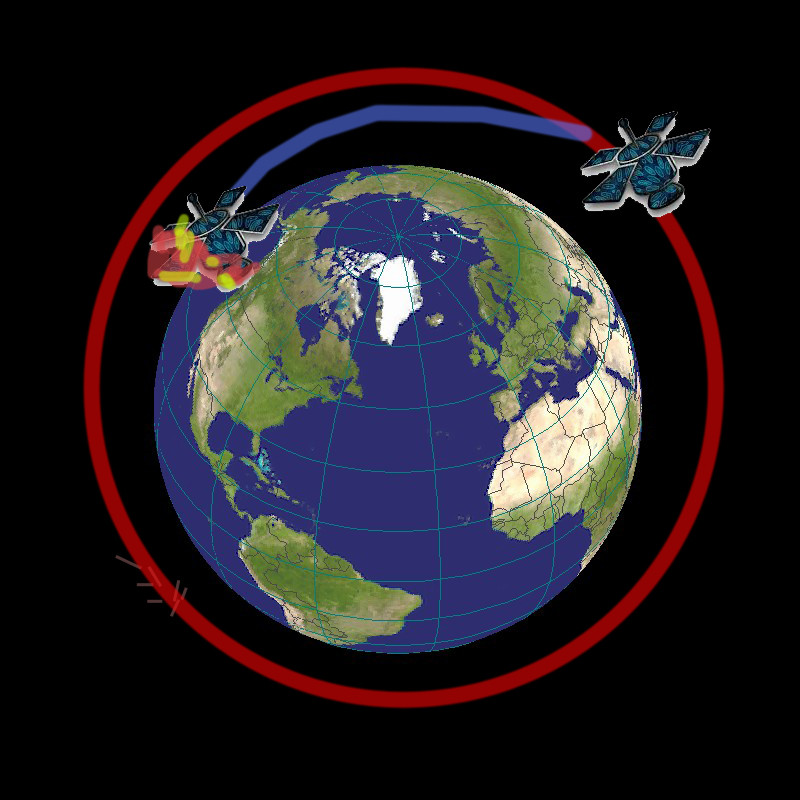 The film is very, very good and a lot of extensive research has obviously gone into it, so I'm reluctant to say this is a goof... more likely either its:

A: Accurate according to some laws of physics im totally unaware of,

B: I've missed some major plot point where this is explained.

As it stands it's incredibly confusing. I know NASA spoke of a 'chain reaction' of satellites crashing into each other, but surely not at a girth of 400KM?

I know it might not go down to well, but can we limit answers to people that have seen the film; although I've done my best to try and explain the problem, there will likely be answers that will start with "I've not seen the film, but..." and end with an explanation that would immediately be ruled out by those who have seen the very specific scenario the film depicts.

We neither know nor care.

Now first of all, I have seen the film, but am still going to call this out as simply physically incorrect. But before writing the answer off as another one of those "the science of the movie was just inaccurate" answers, please let me reason why I still think this to be relevant for your employed viewpoint here.

Now first of all, it has been previously pointed out, that the movie was not as scientifically accurate in many details as a layman might have guessed from a short glimpse. Especially the relative orbital locations of all the objects were entirely inaccurate. The Hubble Telescope and the ISS would have been in entirely different and unreachable orbits.

You said the existing technology wouldn't be able to travel the distance between space stations. How far apart are the Hubble and the International Space Station, for example?
That was the other kind of glaring thing. The fact is, the Hubble is in its particular orbit, the ISS is in its particular orbit, and then the Chinese space station is in its particular orbit. Without getting too involved in orbital mechanics or the orbital insertion planes of these different satellite systems, they aren't close to one another, ever. So Hubble is in an orbit fairly close to the equator … kind of around the belly band of the earth, but at a very high altitude, around 400 miles above the earth. And then the ISS is at a very high inclination, so it sees from basically the latitude of Kazakhstan to an equivalent latitude in the southern hemisphere … so a much greater swath of Earth. The bottom line is that they’re in very different places, traveling at different altitudes and orbits of the earth, so they're not at fixed distances to one another. They're basically speeding bullets relative to one another. Their orbits cross at varying times throughout the day, and it would be physically impossible to get from one place to the other.

Add to this that the evolution and behaviour of the depicted collision cascade would be completely different, too. It wouldn't fly around in such a linear belt of stuff orbiting the earth in a single direction at a speed perceivable by Stone (add to this that the interval keeps at 90 minutes even though Stone considerably moves location).

What's your experience with space debris? If you're out on a space walk, what are you seeing around you?
Well, first of all, if you see it, it's too late. That was quite implausible, to me, first off, the chain of events that would take down the world's telecommunications. Things don't quite move in that pattern. But that notwithstanding, if there were a cloud of Micro-Meteoroid Orbital Debris, what we call MMOD, it would be coming at tens of thousands of miles an hour. I don't know if you've ever looked at a bullet coming straight at you. Hopefully not, but if you had, you wouldn't appreciate it for very long. And these would be a much tinier, swarmlike pattern of debris coming at perhaps twenty times the speed of sound. And you wouldn't see it at all; it would just rip through everything in its path. So it's kind of a spacewalker's doomsday scenario.

Likewise was the whole scene of the Chinese space station being dragged out of orbit highly dramatized and temporally accelerated compared to reality.

What did you think of the scene where she crash-landed to Earth in the Chinese space station?
It was dramatic, but improbable. You start to interact with the upper reaches of the atmosphere, what we call "entry interface," at 400,000 feet, so that's roughly 80 miles above the Earth’s surface. It appeared that the station was substantially above that in the scene, and it probably wouldn't have decayed from its orbit that quickly. That was quite dramatized there, when she's kind of holding onto this bucking bronco of the Chinese space station. It would probably take months or years, even if the station had been hit by lots of and lots of debris, to decay down to that altitude where atmospheric drag would take hold. And that's, of course, how the Skylab and all the Russian space stations were brought down: They fired their engines, lowered their altitude to the point where it could interact with the Earth's atmosphere, and they became fireballs prior to falling to earth.

What those things show is, that the very fundament this specific incident is grounded on is already so different from our own physical reality, that we can't make any reasonable derivations about its plausibility anymore and all we're left with is to accept it as part of the already low scientific accuracy of the movie-universe with equally less in-depth explanation as the other scientific inaccuracies have got.

Now you stated that you're not so much concerned about the scientific accuracy of the movie and this is a valid and fine approach (I for myself don't care that much about it either and enjoyed the movie for what it is, not a documentary). But this doesn't fit to you reasoning scientifically about the plausibility of that scene. For example you use the orbital locations of things (even upto actual numbers) and the structure of the debris wave although we actually don't know much about those things from the movie and the facts we know from reality obviously don't apply.

Are you sure she did go down in altitude and not just move inside the orbital plane where supposedly all of the relevant machines are located in the movie? The fact is, at no point does the movie say that the Tiangong and thus the orbital plane that Stone works in throughout the movie, isn't very close to the earth's atmosphere. Neither does the movie say how "high" that debris cloud actually spans and that it couldn't get dragged into earth's atmosphere either.

The debris following the space station is just another aspect of the scientifically inaccurate orbital mechanincs and debris behaviour applied in the movie in the first place. You say you're not discussing the scientific accuracy of the film but the plot flaw inherent in this scene. But I on the other hand would say there is no plot flaw in this regard. This scene fitted perfectly into the plot at this point and neither did it contradict anything established earlier. You say further that movies set their own rules and it's only a goof when they break those rules, but where there is no apparent clear rule set coherent with our physical reality established about orbital mechanics and debris waves, there's nothing to break either in this regard. In the same way you could ask why the ISS or the Tiangong were actually intact at all, given that the debris wave has already passed them at least once when Stone arrives there. But once the movie reality has sufficiently deviated from ours, as Gravity's apparently has, there is no way to scientifically reason inside of it anymore.

So it is neither possibility A nor B. It isn't accurate to actual physics, but it wasn't explained in the movie either, as well as many of the other physical implausibilities. It isn't a plot flaw when seen in context of the rest of the movie but just a physical inaccuracy, which you chose to ignore, though, so other than that I don't see another answer possible here.

Has anyone thought of the chain react of collisions in a three dimensional sense? My guess is that shrapenel would go off in all different directions hitting other satellites at different altitudes and this would naturally snowball into a field of debris at a multitude of different altitudes thus being able to hit them at the varying altitudes depicted in the film whilst seeming like the debris following her decent home

C: the movie is scientifically inaccurate.

You can start with how Hubble (350mi up), ISS (230mi up) & Tiangong are all in sight lines of one another. There are many many flaws.

2
Why was George Clooney pulling Sandra Bullock away?

8
Why would Randall be out of a job?
29
Why would the Joker have half of the money?
10
Where were the Chinese?
7
Would NASA have known about the oncoming debris in Gravity?
10
How detrimental was the initial hull breach by the shipping container for the boat's ultimate fate?
5
Why is the Endurance still in "orbit"?
10
What would have happened if their life runs out in Jumanji: Welcome to the Jungle?
1
Could the electric company employee have wrecked Hans Gruber's plan?