Reference for 'headlight eyes' in Cars 2?

While watching Cars 2 (again) with my son yesterday, I was struck by the scene in which Mater meets a 'headlight seller' in the Parisian marketplace.

In the scene, he approaches a car which appears to be sleeping, and when he questions it, she awakes, opening her eyes which are in her headlight position and not, as is with every other car in the film, on her windshield.

This freaks Mater out and he drives off in alarm.

I am curious to know if this gag, which seems redundant and/or out of place, is in reference to any other animated films - or whether it is a Pixar inside joke. Does anyone have any insight into this?

I believe it was meant as a joke to those who were expecting the eyes on the vehicle in Cars 1 to be at the headlights position. In earlier Disney films, for example Herbie, there was an anthropomorphic 1963 Volkswagen Beetle.

Though in case of Herbie, a real live action movie there was no need to animate the eyes where as in Pixar Cars much emphasis was placed.

If one were to relocate the "eyes" for Herbie, 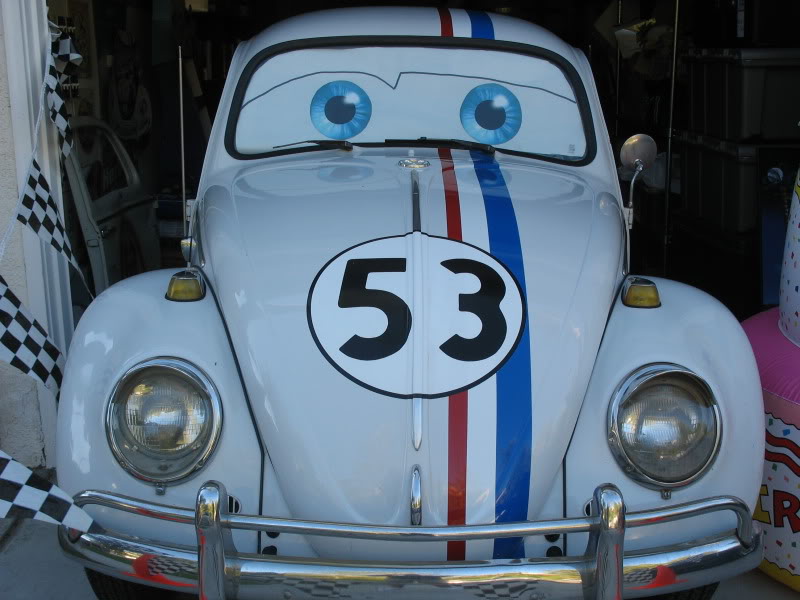 You can see that we will lost the view of the actor inside of which there was none for Cars.

In the end, to me, it felt as an ill-intentioned attempt to be funny (but not) about why Pixar chose their location for the character's eyes.

I honestly thought it was a pun on the while black market thing you know like a botched surgery but in this case a botched headlight , windshield replacement, like maybe she was having eye problems and got ' eye surgery' and they offered to replace the head lights as a nice gesture.

Not the answer you're looking for? Browse other questions tagged plot-explanation cars-2 .

10
Why was Blofeld in a wheelchair in the beginning of For Your Eyes Only?
43
What is the purpose of taxi-cabs and buses in Pixar’s 'Cars 2' movie?
2
Is knowing Cars 2 required to fully enjoy Cars 3?
5
If there is a large cars population, how are the cars brought into existance?
4
Are glowing eyes of Replicants only meant for audience?
5
Mystery in the movie “Julia's Eyes”
2
What happens after David opens his eyes?
4
How do rashes relate to chinese cars?