Who is this man changing the name of Little Dice to Li'll Z?

In the movie City of God, who was the man that Changes the name of Li'll Dice to Li'll Z? 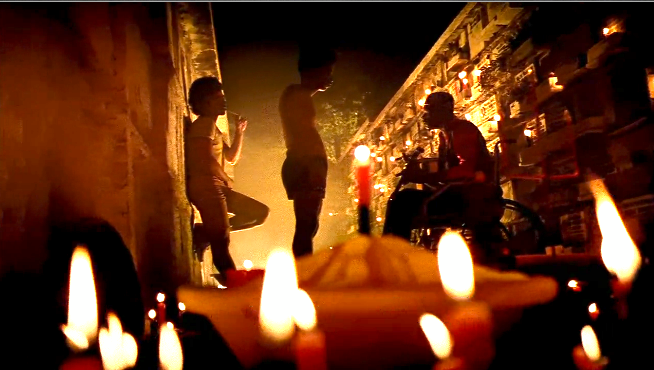 He doesn't appear to have a name. Interestingly, TV Tropes lists this as a meaningful rename trope:

Some names have obvious meanings but often, this is done when it is not the original name for the person, place or object, but rather, a new one given by someone or assumed.

On City of God they say:

In City of God, Lil Dice gets the new name Lil Ze from a religious practitioner, who states his new name will change his fate.

This is discussed in a 2004 article I found, which includes quotes from an interview with the film's director Fernando Meirelles:

City of God also drapes itself in layers of subplot, resulting in a complex web of detail that can only be fully absorbed through repeated viewings. One surreal scene, for instance, shows Lil’ Ze’s ritual transformation from child to man, as he visits a sinister witch doctor’s candle-lit cathedral. “This amulet is your protector,” the elder explains, placing a necklace around the killer’s neck. Many viewers might easily miss the significance of this witch doctor’s insistence that Lil’ Ze not fornicate while wearing the amulet. Watch City of God a second time, however, it becomes clear that the hood’s violation of this command is the catalyst for his undoing.

“The scene with the witch doctor,” explains Meirelles, “comes from a religion brought to Brazil from Africa, called Candonble, that incorporates a lot of saints and entities, like gods that protect the sea and the winds. Different archetypes called orixas. In this scene, a very mean orixa – presented through the witch doctor - gives Lil’ Ze’ his power. But he is told that he can’t screw anybody with that amulet on. Later he rapes a girl. We don’t see the rape actually happen. Instead, there are three seconds showing only the amulet.”

So the man in the scene is some type of witch doctor although his exact name isn't revealed.

Not the answer you're looking for? Browse other questions tagged character city-of-god .

43
Is the man with no name the same character?
2
How do they make the boy in City of god cry in the scene where he gets shot in the foot
2
Who was the man in Wanda's flat?
10
How does Rocket know all those things about Lil Zé?
4
Were there spaghetti westerns with a 'Man with no Name' before the Leone (non)-trilogy?
36
Why do Superman and Batman's mothers have the same name, Martha?
4
Who is the man who fails to engineer dinner with Julia Montague?
16
Who is the last Spider-Man?
1
Who is this character in Little Baby Bum?